• The vast majority of assets always been managed in house, but more insourcing done in last 10 years
• Some 40% of private markets assets are managed externally
• Within public markets investment, some strategic allocation mandates run by Bridgewater and AQR
• Lessons that can be learned are seen as key advantage of in-house management

Danish pensions institution ATP, which manages the country’s population-wide supplementary labour-market pension fund, has never been a large outsourcer of its investment management.

But in the past five to 10 years, efforts have been made at the Hillerød-based fund to bring an even greater proportion of its assets in-house.

The pension fund, which had total assets of DKK779.2bn (€104.4bn) at the end of September, is structured as two portfolios – a DK677.2bn hedging portfolio that backs pension guarantees and a levered investment portfolio with a risk budget linked to the DKK102bn bonus potential.

The hedging portfolio is composed of bonds and fixed income-based financial instruments, and is wholly internally managed.

The smaller investment portfolio is largely managed in-house, although external managers are used to some extent. 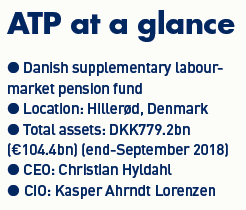 “If we drill into the investment portfolio, it is made up of exposure to both public and private markets, and nearly all of our public market risk is managed internally – around 97% or 98% of it,” says ATP’s CIO Kasper Ahrndt Lorenzen.

“But when we look at the private markets, the division is more balanced.”

On the public market side, Ahrndt Lorenzen says it makes sense to run investments in-house, given ATP’s size – it is the fourth-largest pension fund in Europe – and also because doing so puts its investment team closer to the risk, which means they take more responsibility for it.

Being at the coal face of these transactions also enables ATP to capture the vital benefit of knowledge.

“Even as a big fund, you have to be a bit humble about what you can cover. You would like to cover them all, but the boutique managers are there for a reason and they can often do it in a way you couldn’t yourself”

“You learn more as an organisation if you run it in-house,” Ahrndt Lorenzen says.

Indeed, the acquisition of knowledge is also the rationale for the small proportion of public market asset management that ATP does outsource.

“The one area where we have mandated and will continue to do so, is the more strategic allocation mandates, which are run by Bridgewater and AQR.

“You can have a very good dialogue with these guys, even if you just put a small part of your risk budget with them. They provide us with insights and knowledge that we can benefit from and take with us back to our internal investment management,” he says. 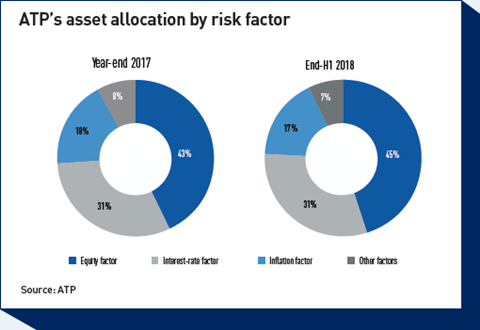 In the last few years, he says, it has been an ongoing process for ATP to insource risk and to shed some of the traditional asset managers it used in the past.

Because of its vast hedging operations, ATP was used to operating with derivatives very early on its existence, and this is one of the reasons why it has been able to have a high proportion of public market investments managed in-house, Ahrndt Lorenzen explains.

“We have had the alternative of putting the money into derivatives rather than sending money to the west coast,” he says.

Managing investments in private markets, on the other hand, is another story, with each market – and each deal within that market – being different.

“Even as a big fund, you have to be a bit humble about what you can cover,” says Ahrndt Lorenzen.“You would like to cover them all, but the boutique managers are there for a reason and they can often do it in a way you couldn’t yourself. So you outsource some of the hard work – but of course you don’t outsource the responsibility.”

In all, 60% of ATP’s investment portfolio risk is invested via public markets and 40% via private markets, and within private markets, some 60% is managed in-house and 40% is in the hands of external managers. Cost-benefit analyses also back ATP’s way of doing things.