Austrian Pensionskassen may no longer be subject to regulatory quantitative investment caps as a result of the country’s implementation of the IORP II Directive.

Pensionskassen would have to set their own investment caps for all asset classes and file them with the Austrian regulator FMA.

Their submission to the regulator would also have to specify measures for cases in which these limits were exceeded and other risk management features.

In line with the IORP II Directive the amendments to the PKG in Austria also increase requirements for “own risk assessments” and internal control in Pensionskassen.

A consultation on the Austrian government’s proposal for implementing the Directive ends on 25 May.

As noted by UK law firm Sackers, IORP II builds on the requirement for pension funds to invest in accordance with the “prudent person” rule and places considerable emphasis on improving governance and transparency in pension schemes.

The new European Union legislation is set to come into effect on 1 January 2019.

At the FMA experts are confident the Austrian Pensionskassen are prepared for the new world of more self-controlled risk taking.

“A lot of the risk management requirements in the IORP II directive are already part of the Austrian pension fund legislation,” Helmut Ettl, chairman of the board at the FMA, told IPE after the supervisor’s annual press conference.

The government is behind schedule when it comes to implementing another EU law, the Portability directive. It has yet to publish a proposal for incorporating this into national law.

“We are already behind and are far from overfulfilling minimum standards in these areas,” said Thomas Wondrak, founder of consultancy konsequent wondrak.

Austrian finance minister Hartwig Löger, a member of the conservative party, has said he wants to include tax incentives for second pillar pensions in the tax reform scheduled for early 2019. This would be with his party’s coalition partner, the far-right FPÖ. 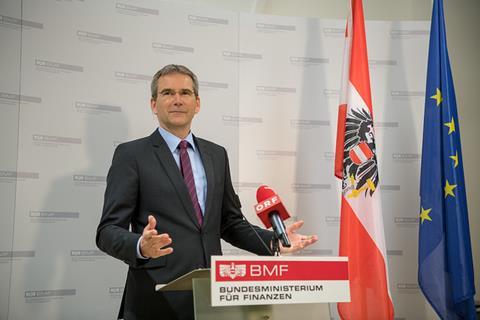 In a speech in Vienna recently he stressed individual responsibility was needed to improve retirement provision, which for him included occupational pensions.

“Private retirement saving will make more sense to people once they see in their workplace that this is a topic that needs to be thought about,” he said.

The problem of a shrinking old-age dependency ratio is widely recognised in Austria, but the country still almost solely depends on a first pillar in which young people’s contributions are used to pay pensions.

“We have an issue here but there is still a lot of ignorance on the subject among many politicians”, said Löger. “We need a clear, significant reform.”

The conservative politician used to be on the management board of insurance company Uniqa before taking office in October last year on a Conservative Party ticket.

A major adjustment for Austrian Pensionskassen might be the new longevity tables the domestic actuarial society has promised for July.

No details of the new trends in demographic development have been made public yet.