BaFin warning on Pensionskassen was ‘wake-up call’ to sector

The German regulator’s warning last year on the financial instability of Pensionskassen was “a wake-up call” to the sector, according to Götz Neumann, chairman of the board at the €2.5bn Pensionskasse for Wacker Chemie.

Speaking at the Handelsblatt occupational pension fund conference in Berlin this month, Neumann described BaFin’s warning as tantamount to “a beneficial shock for some companies”.

In May last year the regulator’s announcement that some of Germany’s 130 Pensionskassen were in poor financial health sent shock waves around the industry, with some accusing BaFin of scaremongering and causing uncertainty among pension savers.

At the time, Frank Grund, head of the BaFin department overseeing Pensionskassen, highlighted the major impact that low interest rates had on pension vehicles with guarantees, warning that “without additional capital some Pensionskassen will no longer be able to operate at full capacity”.

Wacker Chemie’s Neumann said at the conference: “We had to react spontaneously that afternoon to explain the situation to our members. So for us it was more of an irritation as we have a strong sponsor company with which we are in continuous talks about the financial situation.”

However, he added that not all of his peers were that lucky, and that some companies or other plan sponsors “who had known about the crisis but did not take action”. 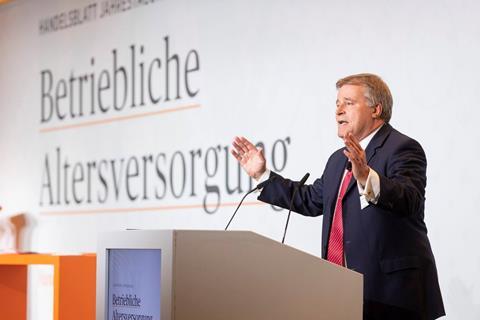 “Many smaller Pensionskassen were able to take the BaFin’s warning to their sponsors to put pressure on them,” he said.

At the end of last year, BaFin took the unprecedented step of closing the Caritas Pensionskasse to new business because of solvency issues. It subsequently confirmed that 54 Pensionskassen were under “close watch”.

Since then, this number has come down to around 30, with some still having to report quarterly to the supervisor. Neumann said this reduction in Pensionskassen at an immediate risk could be in part because of BaFin’s warning.

“We know better than the BaFin how asset allocation works and we could increase our returns if we had more leeway,” he argued.

Neumann added that, with a strong sponsor backing the asset allocation, some Pensionskassen should “be given the chance to earn money on the market rather than the company having to issue cash injections”.