While residential mortgage borrowing has represented a huge proportion of Euro-pean household debt, it is only recently that many of the continent’s institutional investors have begun exploiting these trillions as a source of fixed-income investment.

Although there are several conventional, yet indirect ways for pension funds and life insurers to invest in mortgages through the credit markets — for instance through residential mortgage backed-securities (RMBS), asset-backed securities (ABS) or collateralised loan obligations (CLOs) — routes are now being found for them to do so directly.

Dutch lead the way
In the Netherlands, direct mortgage lending for investors is well established. In 2014, the Dutch Mortgage Funding Company (DMFCO), an independent asset manager, saw that the country’s €702bn home loans market “was waiting for the benefits of disintermediation” and began matching investors to mortgage applicants.

Investing in Dutch residential mortgages has, it says, become a new asset class that has attracted billions of euros so far, and that the model is now spreading to other countries.

Over the past couple of years, Adant says there has been an explosion in interest and an associated development of investment vehicles for institutional investors. “Investment options range the gamut from traditional open end to levered closed-end strategies,” he says.

Nevertheless, he observes that allocations to mortgages continue to be a small part  of client portfolios: “Today, for example, the US residential mortgage market is significantly larger than the US high-yield and US middle-market corporate lending market.”

Adant sees opportunities in the mortgage market as providing an alternative to investment-grade and higher-risk allocations such as direct lending. “Low starting yields and tight spreads combined with a mature economic cycle have led us to focus our efforts on assets such as mortgages, which can offer a number of benefits to institutional investors.

“One benefit is diversifying borrowers which can be achieved by investing in residential mortgages,” he says, adding that the regulation and complexity of the mortgage market has led to significant pockets of value and limited the speed of competition.

Danish market evolves
Pension funds in some countries have yet to make any large-scale moves into direct mortgage lending. This is the case in Denmark, although historically, the country’s pension funds did provide financing for their members to buy homes in the 1980s and 1990s. Mortgages were then extended with homebuyers able to borrow between 60% and 80%, or even 100% of the value of the property.

However, over time, the funds found the administrative burden too high and most ceased offering the facility to scheme members.

Ten to 15 years ago some Danish pension funds did begin investing in broader asset-backed loans, linked to real estate development projects. But some of these investments were ill-fated with the fallout from the global financial crisis in 2007-08 forcing institutional investors to book considerable losses.

PFA has been one of the pension funds to become more active in direct loans, including those to real estate and infrastructure projects, he says.

“We have started to finance private equity acquisitions, for example, directly, and a handful of the larger Danish pension funds who are active in that market that have been building up internal teams for this,” he says.

As with investment in direct mortgages, the motivation for seeking out this type of credit investment is the hunt for yield.

“We are trying to replace our traditional bond investments with these type of credit investments, because we were not getting any returns on traditional mortgage bonds – we basically lost an asset class,” says Nøhr Poulsen.

Some 15 years ago, domestic mortgages and government bonds made up about two thirds of Danish pension funds’ investment portfolios.

But although they are still searching for alternatives to these now low-yielding instruments, so far the funds have mainly only engaged in direct lending to businesses and not individuals, he observes.

Swedes prefer bonds
In Sweden, direct mortgage lending has not made substantial inroads as an investment for institutional investors, although most pension funds are big investors in mortgage bonds. The country’s mortgage bond market is the second-largest in Europe and highly active.

The Folksam group, which manages pensions as well as non-life insurance businesses, is an active market participant and holds “substantial amounts of Swedish mortgage bonds”, according to Anders Bewiz, head of fixed income and foreign exchange in Folksam’s asset management and sustainability department.

“Over the past few years we have been following the emergence of various direct mortgage investment opportunities,” he says. “However, most of these new types of investments are not very developed and do not currently constitute a large presence in the Swedish market.”

Stabelo’s model is to pool capital from institutional investors in exchange for fixed-income securities and uses the money raised to lend mortgages directly to homebuyers. The firm offers mortgages in conjunction with Avanza Bank, which is the biggest online lender in Sweden, and owns just under 20% of Stabelo.

Most of fixed-income investment at Frjálsi Pension Fund is made up of bonds issued by the HFF, which is historically the main mortgage lender in Iceland, with pension funds providing top-up mortgages.

But recently, competition from banks has driven the HFF out of the market with its government-guaranteed bonds having been replaced by banks’ covered bonds which fund their own mortgage lending. 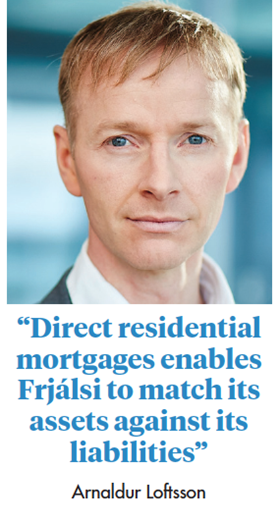 Arnaldur Loftsson, Frjalsi’s chief executive, says this development has led the fund to rethink its fixed-income investment, and make a push into the residential mortgage market.

The fund now has a strategic outsourcing partnership on direct mortgage lending with Arion Bank, which manages assets for the pension fund as well as part of its daily operations.

“Direct residential mortgages offer attractive benefits to Frjálsi’s fixed-income portfolio from two perspectives. It enhances risk-adjusted returns by capturing the illiquidity premium and enables the fund to match its assets against its liabilities,” says Loftsson.

He says the strategy has put Frjálsi at the front of a big shift in the Icelandic mortgage market, with local pension funds having boosted their share in outstanding mortgage loans to 21.2% by mid-2018 from 12.5% at the end of 2014