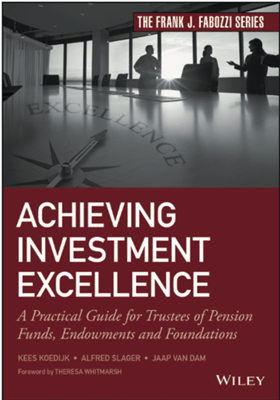 Fix asset allocation and the numbers will follow. This rule of thumb originated from an influential study published in 1986, which showed that 93.6% of variations in a portfolio’s returns are due to asset allocation policy.

Pension plans have since discovered to their cost that having an intelligent policy on paper is one thing, getting the best outcomes in practice is quite another. The ex-post returns rarely match the ex-ante promises. The implied leakage is due to a variety of factors; a key one is governance shortcomings.

Those who piled into alternative investments by emulating the so-called Yale model lost a bundle in the last decade. The Yale Endowment had the governance structure and skill set to secure prime-mover advantage. It also had a predefined exit strategy. Those who sought to emulate it had neither.

To their credit, many pension plans have turned the spotlight on their governance set-up in this decade, inspiring new books. This latest one leaves the rest in the shade. It receives a ringing endorsement from the CEO of the Washington State Investment Board. In her foreword, Theresa Whitmarch writes: “Most of the investment literature is either too superficial or too specialised. Achieving Investment Excellence is both comprehensive and an accessible primer for trustees, something that’s been missing in trustee education. It doesn’t bog down in technical jargon or fall victim to over-simplification.”

The authors, who between them combine academic expertise with hands-on knowledge of the pensions world, provide a crash course on how trustee boards can make better decisions that improve retirement outcomes for millions of people around the world. For new trustees, the book is designed to help them hit the ground running. For experienced trustees, it provides a toolkit for carrying out regular reality checks on their organisational practices and investment beliefs in search of excellence.

For both groups, the book is intended as a counterbalance to the skilled management of the investment organisation that trustees face while performing their role. Some think that the principal-agency problem is as alive today as ever, not least because trustees can sometimes be the weakest link in the pension value chain.

The reader is taught how to side-step common errors as they accelerate up the learning curve, thereby avoiding any pitfalls and the mistakes made by others. The key message is that, equipped with the right skills, trustees can make a big difference. They tend to be highly trained professionals but often in fields unrelated or distantly related to investment management. Yet the success of an investment strategy starts with them, being at the top of the value chain.

Hence, trustees must train themselves in the art of strategic thinking. In practice, that means developing clear investment beliefs about what works, what does not, and why. Furthermore, they must set goals over multiple market cycles based on these beliefs and be allocating resources, delegating authority, and monitoring the outcomes. Trustee boards should, therefore, set the direction and tone for others across the value chain, without micro management.

Sounds like mission impossible? It does not have to be. This book starts with first principles and gradually creates successive interlinking building blocks across the value chain. In my view, there are three areas where the book adds most value:

• Doing the right things versus doing things right: the authors are at pains to point out that trustees are not the party managing the money. Instead, they are in charge of the design of the strategy that sets the goals and the degrees of freedom in their implementation by professional full-time staff. It is all about setting a course after detailed deliberations and sticking to it, while being attuned to learning, adapting and reflecting as events unfold.

Thus, the board’s primary aim should be to ensure that its pension plan is doing the right things, while their implementation relies on doing things right. The two are self-reinforcing loops commonly associated with going from good to great in business excellence.

“The self-reflection questions towards the end constitute a powerful action-learning tool that stretches the limits of thinking. They revisit the core messages from each of the preceding 14 chapters and enable  readers to do a robust reality check on their own organisations”

• War stories: especially welcome in the book are case studies of other pension plans that liven up the narrative and add colour to it. These show what happens when the self-reinforcing loops go in the reverse direction.

The example of CalPERS, the largest pension plan in the US, is instructive. A large number of design flaws in its set-up resulted in an extremely expensive investment process and huge losses. Its funding ratio dropped from about 130% in 1998 to 73% in 2015, creating an unfunded liability of $85bn (€75bn).

In this age of consolidation, the example also provides a salutary reminder that big is not necessarily beautiful. Economies of scale resulting from centralised operations were overwhelmed by diseconomies of scale from the structural fault lines that came from increased bureaucracy, the lack of a portfolio rebalancing process, and unmerited high fees and charges paid to external managers.

• A master class in immersive learning: perhaps the biggest merit of this book is the authors’ highly engaging style developed from their lengthy experience at the coal face of pensions investing, backed by their ability to simplify complex issues in small bite-size chunks. Reading this book feels like sitting in a master class where the tutors are keen to ensure that their students not only understand all that was essential but, more importantly, are motivated to implement these ideas in their jobs as trustees.

The self-reflection questions towards the end constitute a powerful action-learning tool that stretches the limits of thinking. They revisit the core messages from each of the preceding 14 chapters and enable readers to do a robust reality check on their own organisations via a battery of catalytic questions that inspire actions for continuous improvement.

Overall, there is a clear balance between depth and pace, with useful summaries at critical junctures. Achieving Investment Excellence deserves a wide audience.