In the past decade, emerging markets went into overdrive on the back of a super-cycle fuelled by double-digit growth in China and a credit explosion in the US.

Since the 1980s there has been gradual convergence between emerging and developed economies. Initially, led by trade, aid and foreign direct investment, this embraced other aspects over time, thereby not only broadening the base of convergence but also deepening it. Looking ahead, this progression will continue, according to the 2014 Principal Global Investors/CREATE-Research Survey*.

More than half of our survey respondents identified these five aspects where they expect more convergence than divergence over the rest of this decade: standards of living; regulatory framework for financial markets; industrial base; asset class correlations; and market depth and liquidity.

Notably, the correlation between the emerging market and developed market equity indices has been rising steadily in the past decade, and now stands at around 0.9. Growing economic interdependency has been a key factor.

Furthermore, at the end of 1980, the average annualised historical volatility of emerging market equities was 40%; by end of 2013, it was 27%. This has nearly halved the ratio of emerging to developed market volatility, from 1.9 to 1.1. 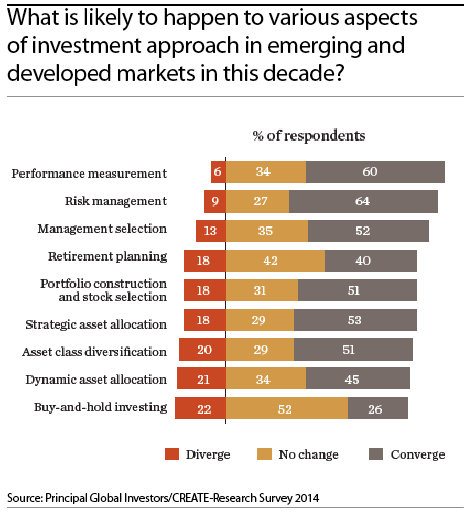 Yet, investment convergence between emerging and developed markets will remain less marked, and will be confined to techniques more than mindsets.

Investing is both a science and an art. Its ‘hard’ aspects – like Monte Carlo simulations, VAR analysis, risk-return features, portfolio construction and asset class correlations – can be learned from books and classrooms. But not so with its ‘soft’ aspects – such as investment beliefs, gut instincts and prime-mover advantage. They rely on learning by doing.

Unlike cognitive learning, experiential learning cannot be fast-forwarded. This has especially been the case in nations where the savings culture, based on capital preservation and income upside, has long prevailed.

The idea that investing is a bet on an unknown future where risk generates return over time is easy to understand but hard to accept. Unsurprisingly, in investment matters, therefore, our survey respondents expect a growing convergence between emerging and developed economies to be more real in hard areas like risk management, performance measurement, strategic asset allocation, and risk management (see figure).

At the other end, the lowest scores on convergence are confined to two soft areas:

These numbers are indicative of an important dichotomy. Asset managers in the West have established a strong presence in most emerging markets. With it has emerged a new professional infrastructure of skills, expertise and technology that emulates the best in the West. Indeed, they are driving convergence in the hard aspects of investing, as are indigenous professionals trained in America and Europe.

Convergence in the soft areas, on the other hand, relies on investor behaviours on the ground. The path to buy-and-hold investing has been slow for two reasons.

First, investors have an understandable strong home bias. But with historically high volatility in local markets, trading has taken precedence over investing. In most Asian and Latin American economies, products are sold, not bought. Independent advice channels remain the preserve of the ultra rich. Financial education remains confined to Brazil, Chile and Singapore. But even in those countries, concepts such as dollar-cost averaging, compound interest, market cycles and asset diversification are not widely recognised.

Elsewhere, the prevailing sales engines continue to thrive on high churn. New product launches attract the same razzmatazz as IPOs. Retail investors shoot for the stars, with no tracking error.

Arguably, trading has one saving grace – it is part of experiential learning. Some see it as a way station on the path to buy-and-hold investing. After all, that is how it was with investors in the US before 401(k) plans were introduced in the 1980s.

Large investors – like insurance companies and sovereign wealth funds in emerging economies – profess to subscribe to it. Yet, in their real-time world, many still focus on short-term results or peer benchmarks, always worrying about whether risk premia will materialise over time. Career risk is always lurking in the background. Thus there is a low tolerance for failure, a high time-preference rate and quarterly rankings of managers.

To their credit, however, ever more of these large investors are stepping up their engagement with their external advisers and asset managers, as part of adaptive learning. The requisite DNA is developing gradually.

The second factor behind this gradual process is the orientation of the newly emerging retirement systems in countries such as Brazil, Chile, China, Hong Kong, Malaysia and Singapore. In this phase of their evolution, the trustee boards are overcautious to the point where the systems are promoted as a supplemental element of retirement savings, not the principal one. The required tax breaks are limited. Individuals are still enjoined to accumulate private savings as a principal source of retirement income.

In emerging markets, the art of investing will develop gradually. Even large investors such as insurance companies and sovereign wealth funds worry about whether they can wait for an extended period to get risk premia. Having been brought up in a saving culture, their top executives want capital protection and a regular income upside as baseline outcomes. Investing has to do better than that. Many of them are also political appointees with a strong ‘rent’-seeking mentality. Until the buy-and-hold culture becomes more pronounced, Asia will be wealth-rich, income-poor.

*A complimentary copy is available from amin.rajan@create-research.co.uk