Italian prime minister Giuseppe Conte quit his post this week, signalling the end of the controversial coalition government of the Five Star Movement and the Northern League.

Italy is the world’s eighth-largest economy by GDP, according to the International Monetary Fund, and the fourth largest in Europe. It has the fourth-largest debt-to-GDP ratio in the world (132.2%, according to TradingEconomics.com), after Japan, Greece and Lebanon.

Despite this, however, bond markets barely batted an eyelid. Italian 10-year yields have been on a steady downward trend since the end of May, Bloomberg data shows, broadly tracking German 10-year yields.

This was only briefly interrupted during 9-10 August when yields spiked as Conte recalled parliament for a vote of no confidence, as requested by the Northern League’s leader Matteo Salvini.

With the coalition now broken, president Sergio Mattarella has initiated talks with Italy’s main parties in an attempt to construct a new government, but another general election is a distinct possibility.

Why are bond traders so relaxed about the collapse of Italy’s government? 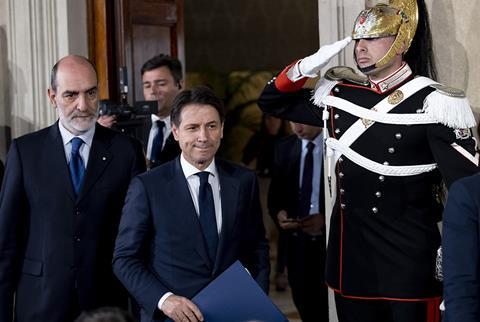 Giuseppe Conte leaves talks with Italy’s president in May

As DWS points out in a commentary published today, political crises are far from unusual in Italy, with some historians counting 65 changes of government since 1946 – an average almost one a year.

“However, a closer look at the development of spreads in 2018 shows that political uncertainties can leave strong marks in financial markets,” DWS says, making the lack of movement in yields in recent weeks “all the more remarkable”.

While Italian instability may not be of interest to bond markets, the actions of central banks certainly are. DWS argues that there have been “numerous signs” that the European Central Bank could resume buying up government bonds in an effort to calm market volatility.

“There has already been a substantial shift during the last 10 years,” the asset manager states. “While foreign investors held almost 50% of Italian government bonds at the end of 2009, this share has now come down to just over 30%. The share held directly by Italian private investors fell, too, from just under 20% to only 5% now.

“On the other hand, domestic banks and especially the central bank have increased their holdings. The share of the latter rose from 4% to currently almost 20%, which is the equivalent to an increase of €337bn.

“In addition, it is reassuring that Italy, thanks to the austerity of recent years, nowadays is running a substantial current-account surplus.”

Investors have bought up more than €15bn worth of Italian debt since the start of the year, according to Joern Wasmund, head of fixed income at DWS. He believes Italian government bonds still “seem tempting” for investors, given the increasing amount of fixed income securities trading with negative yields.