How to bridge a most obvious pension investment gap?

Investment luminaries were recently invited by the CFA Institute to give their opinion on the financial system in a publication to mark the quarter century of the institute’s research award to commemorate Jim Vertin. 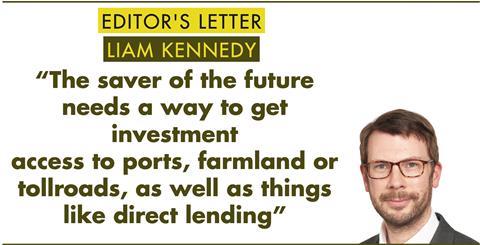 Vertin was a chair of the Institute of Chartered Financial Analysts and pioneer of index management who dedicated himself to the “pursuit and dissemination of new ideas”, as one tribute puts it.

In his chapter in the CFA Institute’s publication, Keith Ambachtsheer, 2008 recipient of the Vertin Award, promotes the Canadian pension model, of which he was a key architect. Its twin pillars of scale and sophisticated diversification are an aspirational beacon for pension institutions around the world.

Yet it is a model that is remarkably hard to imitate. Millions across the world save hard earned capital into inefficient defined contribution pension schemes that were devised for a different era. This year has uncovered a new and urgent challenge for financial institutions: to rethink their investment models and, in particular, to recast their default options for a new environment.

As several of the previous Vertin Award recipients write in the CFA Institute’s publication, among them Cliff Asness of AQR, lower returns from traditional asset classes can be expected. This year has also shown that bond portfolios can have meaningful and unwelcome drawdowns.

Even if mean reversion restarts itself, it can undermine confidence in pension savings in the long term if savers experience heavy losses in default strategies or portfolios branded ‘safe’ or ‘secure’.

Millions across continental Europe save into such default funds with a high weighting to bonds, particularly those heading towards retirement who have been ‘lifestyled’ into so-called safe portfolios.

A person in a 60/40 euro-hedged portfolio allocated to global aggregate bonds and global equities would currently be looking at a negative performance even on a three-year basis.

While a 100% equity investor might expect volatility and significant drawdowns, it is a fair bet that many pension savers with 100% in a euro-hedged global bond portfolio would not have anticipated the hefty 8% drawdown experienced in the first six months of 2022.

Many investors have sleepwalked into a situation they cannot have anticipated. They are saving into products run by financial institutions that do not have the agility, the alignment of interests, or in some cases even the mandate, to adapt default portfolios rapidly.

Many savers may overreact and withdraw assets, crystallising losses. Others may not have the time or the risk budget to recover from drawdowns.

Put simply, the saver of the future needs exposure to the kinds of asset classes that Canadian citizens have through Canada Pension Plan, or their Danish counterparts have through ATP. This means giving ordinary people a way to get investment access to ports, farmland or tollroads, as well as things like direct lending.

Structural barriers need to be overcome – among them requirements for liquidity that impede allocations to private market assets. Technology can also be a tool to democratising access here. Tokenisation of assets, allowing fractional ownership, should be widely studied and adopted.

All this will require policymakers, including at EU level, to show the way, with pioneering institutions demonstrating that these things can be done at scale and without undue delay. Costs are also a central consideration and too many people save into sub-scale, high-cost vehicles that are no longer fit for purpose.

We can look forward to a pretty bleak year for returns across mainstream asset classes. Central banks will try to contain inflation, but most likely not without significant collateral damage to economies. Some of this will come at the expense of ordinary savers who will face unemployment and exclusion from long-term savings. This makes the challenge all the more urgent.

Some lucky countries may be able to build new pension institutions to rival those of Canada or parts of Europe. The Netherlands faces the challenge of building a new collective defined contribution system that should have the capacity to allocate a significant portion of the country’s €1.9trn in pension wealth to sophisticated illiquid investment strategies.

Democratising wealth creation in the future will include rethinking static default portfolio products and the language around them, in Europe and across the world.