Investors’ attention turned to human capital issues in 2020 as COVID-19 took hold – including the treatment of staff and other stakeholders, as well as dividend policy and executive pay in cases where companies have received taxpayer support.

In some ways, this amplified an increasing focus on social and stakeholder issues – relating to employees, supply chains and communities – in other words, the ‘s’ in ESG.

When the US Business Roundtable (BR) redefined its definition of the purpose of a corporation in August 2019, you might have been forgiven for thinking that a lot had changed, but simultaneously that not much had changed either.

No fewer than 181 CEOs committed to the new pledge to “deliver value to all stakeholders”.

For some, the fact that such a staid organisation as the BR was moving to take stakeholder interests into account was indeed a very big deal. The rush of prominent CEO endorsements of the revised statement was evidence enough that something has changed.

At the same time, as the authors of an op-ed article in the Wall Street Journal in August 2020 found, most signatories to the statement appeared to have made the decision to sign up to it without taking wider consultation. The conclusion is that the change did not mean very much to the CEOs because they had not even sought board approval.

Last autumn marked the 50th anniversary of a famous essay by Milton Friedman, published in the New York Times in September 1970, in which he accused advocates of the social responsibility of business as preaching “pure and unadulterated socialism”.

Friedman also stated that “discussions of the ‘social responsibilities of business’ are notable for their analytical looseness and lack of rigour”. That may well have been the case in the 1970s, when there was an absence of data.

Few would venture to argue today that non-financial considerations, including ESG and social responsibility, do not have a place in investing. Serious discussion only centres on how they should be taken into account by investors, and what information companies can or should provide – with a clear direction of travel towards comparability of reporting and metrics, and the convergence of standards and frameworks.

It seems absurd today for an investor to restrict herself or her investment model by relying on just one set of financial metrics, just as it seems absurd for shareholders to restrict CEOs to a focus purely on increasing quarterly earnings per share without an eye to the longer-term success of the business and everything that entails – including stakeholder interests where they are material. 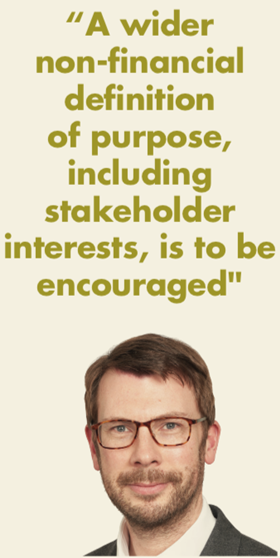 Some material outputs or metrics, like scope-1 and 2 carbon emissions, say, are clearly easier to isolate or quantify than others, including human capital and some social issues.

New perspectives are opening in human capital and related social issues, with evidence of better financial performance for companies that score higher on some human capital or stakeholder metrics.

Prof Alex Edmans of the London Business School substantiates the case in his 2020 book Grow the Pie that US companies which take account of a wide set of stakeholder interests are demonstrably more financially successful than those that do not. As evidence, he states that companies with high employee-satisfaction levels outperformed their peers by 2.3%-3.8% per year over a 28-year period.

Edmans contends that a wider non-financial definition of purpose, including stakeholder interests, is to be encouraged as long as it is material to the business and shareholders agree.

For active equity managers, the key will be to identify the right non-financial metrics in social or human capital issues. For some, this will be about traditional, bottom-up fundamental analysis, while for others there is a quant perspective.

As IPE reported late last year, ATP is looking to integrate human capital signals into its quant-investing models. A backtest over five years has already proved encouraging. Data providers like TruValue Labs also claim that an AI-driven approach can provide better insights for asset managers, and are pushing the boundaries of static materiality frameworks.

CEOs and boards who think they can throw up a smokescreen on issues like human capital without serious intent are more likely to be caught out in the future.

As reporting and data improve, investors will only get more skilled at identifying companies with increased material risk not represented in traditional reporting, as well as those with better growth opportunities arising from the way they handle the related risks and opportunities.