Before the Russian government’s decision to invade Ukraine at the end of February, the exposure of European pension funds to Russian assets was relatively low, and in some cases non-existent. Nevertheless, those funds that did invest in Russia acted quickly to reassess their exposure and divest from Russia entirely when possible, given the treacherous market conditions. 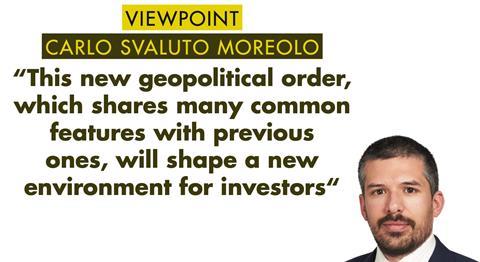 Asset managers appeared to support their clients’ efforts to manage this process. Some managers have advocated against ‘fire sales’ of Russian assets, but have banned new investments into Russia.

Such decisive action was facilitated by the response of Western governments to Russia’s invasion. By imposing sweeping sanctions on Russia’s economy, the US and the European Union have made the country uninvestable for the foreseeable future.

The attempt to remove Russia from global financial markets, so far successful, reinforces the idea that a new Iron Curtain has been raised, ending more than three decades of peace in Europe, if the conflicts in the former Yugoslavia are not counted.

This new geopolitical order, which shares many common features with previous ones, will shape a new environment for investors. The great level of uncertainty does not bode well for financial markets and there are several possible scenarios for European institutional portfolios, both in the short and long term. A very bleak scenario would be stagflation.

But there are also favourable scenarios, such as one where fiscal policy and private investment help Europe rid itself of its dependence from Russian oil and gas, and transition to a greener economy.

Whatever happens, the reaction of pension funds to war on European soil shows that they are more than just investors. While on one hand they were forced to divest from Russia in order to protect their members’ pensions, no doubt they were also moved by a willingness to show support to the people of Ukraine and disdain with Russia’s aggression, just as millions of pension fund savers would have expected them to do.

There may be those within pension fund boards, and scheme members, that criticise NATO for its role in stoking up tensions with Russia. There are also those that justify divestment from Russia only on asset allocation grounds.

However, the fact is that any institution investing millions of euros to secure their members’ retirement, today has a role that transcends its original purpose. This has to do both with the interconnectedness of the global financial system with the real-world economy and with the fact that pension funds are primarily stewards of capital. Their role in supporting the economy, in times of peace and war alike, is crucial.

It might take time, effort, and several mistakes along the way for each pension fund, and the pension industry collectively, to come to an understanding of the nature of this heightened purpose.

Some pension funds, for instance, may want to support the defence sector while others may not. But the present situation calls for hard reflection on the true purpose of pension funds.