While we watch horrible scenes of towns and cities under bombardment, their bewildered and bloodied citizens desperately searching for safety, the huge shockwaves generated by the Russian invasion of Ukraine are spreading rapidly far beyond both countries’ borders.

With so little clarity, and such a fluid situation, financial markets are of course stressed and volatile. Some trends seem more obvious than others. Inflation is about to rise a great deal more, for example, but the outlook for economic activity overall and central banks’ monetary policies is much harder to unpick.

Financial conditions have certainly tightened, and liquidity has dropped in capital markets throughout the world, which could create plenty of complications for central bank tightening forecasts. Recent comments to the US Congress by Jerome Powell, chair of the Federal Reserve, seemed to confirm his commitment to raising rates soon, although he stated that the Ukraine situation created a great deal of uncertainty around wheat, oil and other goods, and that the Fed would be “monitoring the situation closely”, emphasising the Fed’s data focus.

The enormous shock to commodity markets has been much in focus, not just in energy but across the spectrum, and for good reason. Although Russia may be best known as an energy exporter, it and Ukraine together account for nearly 30% of the international wheat trade. With markets very quick to price in gloomy scenarios, wheat prices have already hit historic new highs (see chart). Other commodity prices, particularly those linked to the geographical region, such as industrial metals and other agricultural products, have also shot up. 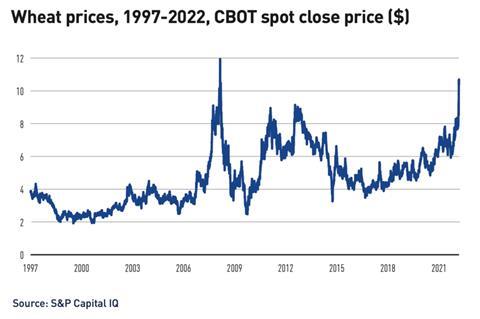 As well as the impacts on inflationary indices, there is potentially a myriad of structural changes ahead. The cancelling of the Nord Stream 2 natural gas pipeline, for example, brings into sharp focus Europe’s huge energy dependence, and perhaps raises questions about the prioritisation of society’s energy needs over national security and safety. And that a German government has announced a significant increase in its military expenditures is a huge break from the status quo of the past eight decades.

There has yet to be a meaningful narrowing of the US Treasury-Bund spread, a metric which has been a consistent feature of flight-to-quality moves in recent years, which was especially noticeable as implications of the COVID lockdown started to become apparent in March 2020. The geopolitical risks remain extremely high, however, and it is possible that this spread may yet trend significantly narrower.

Aside from the severe geopolitical risks, there is also considerable uncertainty about the economic implications, even without further escalation of the conflict. The fear of stagflation, with economic activity stalling in the face of rising inflation, is back.

The US economy has perhaps less reason to be concerned about stagflation than Europe, not least because of its distance from the conflict but also because it is less reliant on energy imports. However, breakevens in the US Treasury inflation-protected securities (TIPS) market have risen across the board, from the short term as well as out to 5Y5Ys.

It is not clear that, in pricing inflation to stay high for longer, markets are really losing their faith in the Fed’s credibility to control inflation and guide it back to within target. Certainly there has been a more dovish market pricing of Fed rate rises, but this does not necessarily mean that the Fed is less hawkish. It could instead be a reflection of the tightening of financial conditions as the conflict has developed.

For Europe, which is feeling keenly the impact of soaring commodity prices, especially natural gas, those inflationary concerns are worrying. Inflation markets have been quick to price in higher inflation in the short term and also much further out into the future. Given the magnitude and quantity of unknowns today, even short-term inflation pricing may be dubious.

However, although it may be even more difficult to argue that the market’s longer-term pricing is unreasonable, the sense of jeopardy is extremely high.

Although 2022 may have started out as a year when the euro could strengthen against the US dollar, such bullish forecasts are being revised. So are some erstwhile safe havens, not least because surging commodity prices benefit the outlook for G10 commodity exporters, while at the same time damaging the prospects for Japan, given its significant dependence on imported energy.

For Europe there are some significant reasons to envisage downward pressure on the currency. The downgrading of rate hike expectations, deterioration in its terms of trade for energy, the reliance on Russian energy (30% of imported energy comes from Russia) and its geographic proximity to the hostilities, all combine to create a currency that might be best avoided for now.

In the face of such monumental uncertainties, nervous and fragile markets are pricing in deeply pessimistic outlooks. So far, emerging market currencies as a whole have generally remained calmer than emerging market equities and credit, which have both sharply sold off, and there have also been sizeable outflows from bond funds.

There are exceptions to this relative calm in emerging market FX. Most notably, and arguably least surprisingly, are the CEE-4 currencies (Hungary, Poland, Czech Republic and Romania) which have seen heavy selling. Although some central banks have been intervening, it appears their actions are more to ensure markets keep functioning as smoothly as possible, rather than attempting to find a floor. The outlook is tricky, as current account deficits have been trending wider for these countries and funding the deficits could get much harder.