COVID’s huge influence on all our lives, whether through disruption of global supply chains or threats of lockdowns in the face of soaring infection rates, was reasonably constant throughout 2021. However, it now appears that GDP numbers have become generally less sensitive to COVID infection rates than they were, say, 18 months ago, with high vaccination rates (certainly across developed markets), and an awareness from politicians that the public’s willingness to comply with lockdowns may be waning fast.

Unlike much of the rest of the world, China has adopted zero tolerance to COVID, which has meant harsh lockdowns whenever cases are detected. With both the Chinese New Year and the Winter Olympics, which starts on 4 February in Beijing, the authorities will be very anxious to ensure that they can contain any COVID outbreaks. The extremely transmissible Omicron variant has yet to hit China and there is a danger that huge swathes of the country are simultaneously and strictly locked down, which could severely dent national economic output. 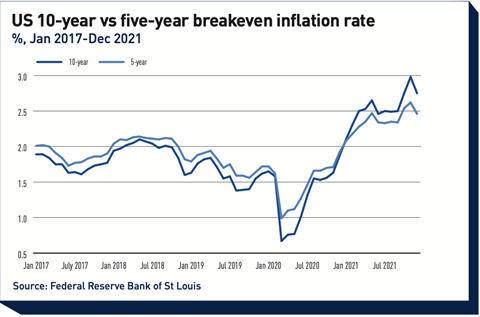 Elsewhere, economic growth forecasts for this year generally remain reasonably upbeat, if somewhat lower than in 2021. For the US, some forecasters have made significant downgrades, citing the knock to previously assumed expansionary fiscal policy, as envisaged in President Joe Biden’s original Build Back Better fiscal package. The now much diminished fiscal package is still to pass through Congress.

The January release of the Federal Open Market Committee minutes reaffirmed the more hawkish mindset of the committee’s participants, and perhaps a greater sense of urgency than a month earlier. Inflation seems more “persistent and widespread”, maximum employment appears to be “fast approaching” and balance sheet run-off – quantitative tightening – could be starting sooner than previously thought.

Given the Fed’s balance sheet is now far larger, the process is likely to be significantly quicker, and bolder, than the last time, although it seems likely that this will entail not replacing maturing bonds, and that the Fed may not yet be ready to sell assets outright. Thus far, however, this prospect of running down the Fed’s almost $9trn balance sheet does not seem to be overly worrying markets. But it will most definitely stay top of mind for investors for the time being.

While US equities posted their third consecutive year of double-figure returns and other developed markets also rallied strongly, commodities had a stellar year. The S&P GSCI returned 40.4% over 2021, with energy leading the way. For fixed income investors, on the other hand, global inflation data repeatedly surprised and often shocked, to the upside, challenging and finally re-writing the early narrative of a transitory rise in prices and leading to higher yields.

But it is noteworthy that global yields did not rise rather more. Given that 2021 was producing such strong economic growth numbers and some very punchy inflation data, few could have predicted a year-end yield of 1.4% on 10-year US Treasuries.

Commodities: supercycles for some?

When commodity prices rise strongly, as they (nearly all) have done throughout the past year and a half, it often sparks debate about whether commodities have had their time in the limelight or if, on the other hand, last year’s price moves might be just the start of the next commodity supercycle.

One of the main arguments for a bullish outlook on oil and therefore many other commodities whose production tends to be energy intensive, is based on oil’s ‘triple deficit’: in inventories, spare capacity and investment.

As we move towards decarbonisation, investors increasingly shun the commodity world, and so despite higher oil prices, there has been very little or no desire or ability for producers to increase capacity or investment, suggesting extremely low elasticity to prices. Thus future increases in demand, as we hopefully enter the post-pandemic world, will not be met with increasing supply but instead with higher prices.

Those arguing against the supercycle outlook first point out that commodity prices tend to rise after a recession, as spending catches up when employment rises. Today, as we emerge from lockdowns, the focus of economic growth is likely to rotate from goods back to services, alleviating some of the current intense demand for certain commodities.

Where there may be more agreement is the idea that certain commodities are indeed entering their own supercycles, with copper and other metals perhaps being the best known, in the move towards electric vehicles and more renewable energy sources.

In the Treasury Inflation-Protected Securities (TIPS) market, 10-year breakevens (BEs) have been trading lower than five-year BEs since the start of 2021 (see figure). That gap has widened in recent weeks, despite increasingly hawkish tones from central banks suggesting that inflationary trends were becoming more worrying, not less. It is not immediately clear what this inverted BE curve is telling us, perhaps that near-time higher inflation is indeed transitory and the Fed’s inflation fighting credentials remain credible.

Alternatively, it may be that both longer-dated rates and breakevens are still too low and ought to be higher. Although the market seems to have already priced in three rate hikes for 2022 alone, forward rates are discounting a terminal rate of no more than 2% for Fed funds, despite the Fed’s own estimate of a neutral rate (r*) of nearer 2.5%.

It is possible that markets are pricing in just a shallow hiking cycle which will bring economic growth back into balance. It is however, hard to ignore the elephant in the room – the Fed’s balance sheet and especially its influence in suppressing longer-dated rates. The big question is when markets, though already pricing in a (gently) higher rate scenario, become worried that central bank balance sheet run-off might disrupt the status quo.

There is a reasonably broad consensus that the more hawkish response from the Fed argues for higher nominal and real yields. And with a lower chance of tightening messages coming soon from either the European Central Bank or the Bank of Japan, the US dollar could be poised to appreciate, particularly against the low yielding currencies, the euro and yen.

However, the dollar has not really had a strong start to the year, and some analysts are suggesting that the technical picture has been weak. In equity markets there are again signs of a rotation from growth to value stocks, seen for a period during Q1 last year, when US yields rose sharply. Given that the US is home to such a high proportion of the world’s major growth stocks, this rotation might lead to more significant outflows from US equities and into other markets in Europe, the UK or Japan, should the growth-to-value dynamic remain in place for meaningfully longer.

It is not clear that equity moves out of the US are enough to negate the support the dollar is already getting from ongoing above-trend (US) economic growth, and with a surprisingly more hawkish Fed than expected, the prospect of significantly higher nominal and real rates.

Although dollar appreciation is forecast by many for the earlier part of the year, opinion is more divided as to whether the currency will continue appreciating beyond that. If inflation does peak in Q1, with both prices and wage growth stabilising, then the current prediction of three hikes this year seems sufficient. However, should that inflation genie prove harder to get back in the bottle, then the Fed may have to act more aggressively, which could then push yields even higher and further support the currency. 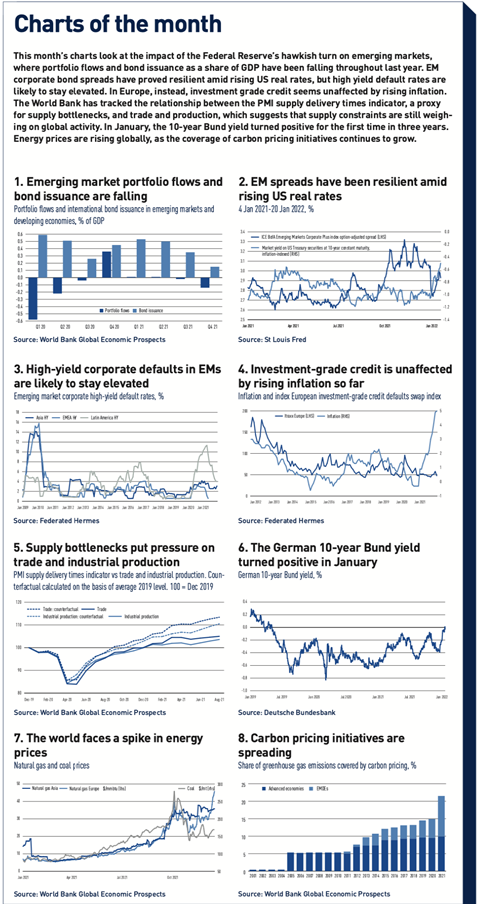