Board diversity, ESG investing, and external reviews are relatively low governance priorities for pension scheme trustees and managers, according to a report.

It was produced by Winmark, which runs professional member networks to facilitate peer learning, and Sackers, a law firm. It was based on a survey of 84 pension schemes – trustees and pension managers – and 13 in-depth interviews with chairs of trustee boards and other pensions experts.

Board diversity in terms of gender, ethnicity and age came last out of a list of 25 governance elements that survey participants were asked to rank for importance, on a scale of 1-5.

The report said this did not mean trustees think diversity was not important.

“In their defence, many survey participants do recognise the need for diversity of skills and perspectives,” it said. “They just do not see diversity in trustees’ individual characteristics such as gender, age, or ethnicity as on a par with certain other aspects of governance.

“Also, difficulties recruiting trustees mean that boards often do not have many candidates.”

The UK’s pensions trade body has launched a ‘Breaking the Mirror Image’ campaign to try to encourage greater diversity on trustee boards and pension executive boards. It also put diversity at the heart of its annual investment conference in March. 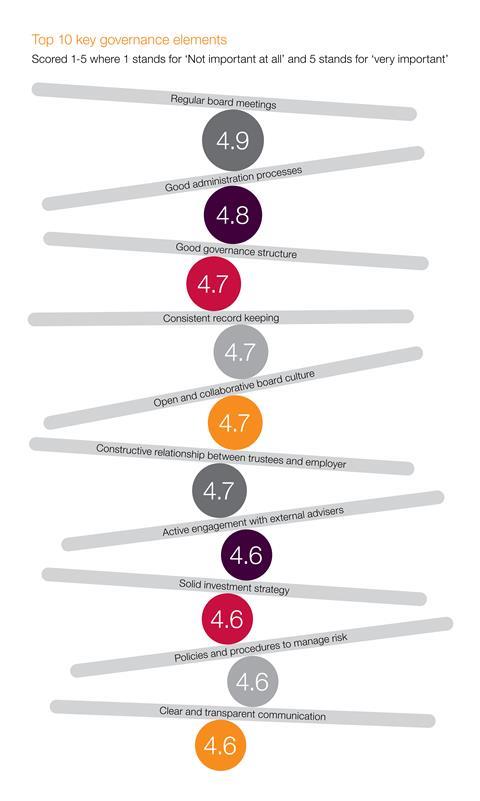 “ESG” and external governance reviews also came out as low priorities in the ranking, according to the survey report, which did not define ESG beyond “environmental, social, and corporate governance”.

It said some participants were not sure what ESG meant.

“This is despite it receiving media attention and initiatives such as the Association of Member Nominated Trustees’ Red Line Voting to support trustees in being investors who are well-versed in ESG,” it noted.

A recent BNP Paribas Securities Services survey of 461 asset owners and asset managers found that a fifth of respondents did not incorporate ESG, with the main reason being an inability to define it.

Sackers said that governance was “a balancing act” and that prioritising of tasks was a key part of good governance.

“Prioritising is part of good governance, and so is having an understanding of what will add value and where efforts are most likely to be rewarded,” it added. “While the aspects of governance that were considered to be of least importance all have value, it is reasuring that the main priorities are understood.”