The outlook for Europe’s bond markets cannot be separated from the situation in the wider world, says Caroline Hay

• The Greece situation remains problematic, although headwinds from China and the wider world are the main preoccupation.
• Growth is evident but unevenly distributed; inflation continues to disappoint and will remain an issue.
• Managers are cautiously positioned in the face of unanticipated volatility.

Having been the root cause of so many bond market blowouts in the past few years, can euro-zone bonds look forward to a period of relative calm and common sense, now that the Greek time bomb has apparently been defused?

Investors, it seems, remain alert to the fact that Greece has not entirely lost its capacity to rattle markets. “The Greek situation has not been resolved, with another potentially messy election coming up, although we now think that its market impact may be diminished and we might consider the Greek tragedy to be more of an isolated phenomenon,” says Kommer van Trigt, head of Robeco’s global fixed income macro team.

“Over the last few years, we would agree that the euro-zone’s own crisis was the cause of a great deal of volatility for European, and other, bond markets,” says Isabelle Vic-Philippe, head of euro rates, inflation and index fixed income management at Amundi. “But we all know that there will also be other things that bring volatility, such as events in China.”

Chinese developments have certainly had extreme effects on markets throughout the world, with shares plummeting and other markets gyrating wildly. According to Ludo Geris, fixed income fund manager at KBC Asset Management, the sharp fall in Chinese stocks was not in itself bad, given their previous surge. “What does trigger worries, however, is the state of the economy, and the unrealistic official growth statistics. The half-hearted approach of the authorities rather gives the impression that they have lost some control of the system.” 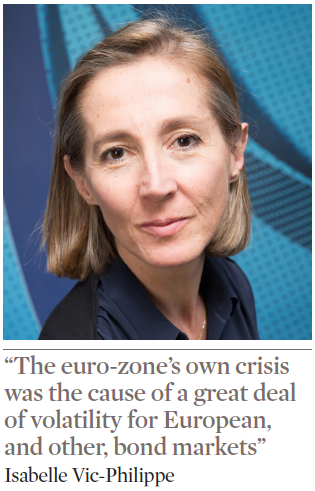 “China is a big risk for all of us,” says Mickael Benhaim, co-head of global and regional bonds at Pictet Asset Management. “There was always going to be friction as the Chinese authorities try and engineer the transition of their huge economy from an export-driven to a domestic consumption one. But much of the turmoil has been created because their communication has been so poor and seemingly contradictory.”

Amundi’s Vic-Philippe agrees that the lack of clarity from Chinese officials added to investor worries. “The Fed on the other hand knows that it must be seen to be credible,” she says.

“We do not think that the Fed is going to take any risks,” says Benhaim. “But they will be cautious about the negative impacts to the US economy from China’s slowdown, although some officials are already downplaying the events there. A combination of Fed tightening and further RMB devaluation could ultimately derail global growth.”

The global importance of the Fed’s actions cannot be underestimated, argues Ben Bennett, head of credit strategy at Legal & General Investment Management (LGIM). “Ever since the US stopped its QE last year, thus setting in place a period of tightening liquidity and an end of the easy money for emerging markets, it triggered the appearance of some significant cracks, in Brazil, Russia and now in China.”

The medicine has not worked

In the longer term, Bennett and his fixed income colleagues at LGIM paint a gloomy picture, arguing that massive debts, which have accrued throughout the world’s economies, have been misallocated and now assets are failing to contribute sufficiently to economic growth.

They suggest that this is at the root of many of the problems facing central banks and that more economies will fail to achieve the growth needed to escape their debt traps. They will effectively have to compete with each other to float away their debts by printing money.

But, as many policymakers are finding, inflation is proving rather hard to generate and European inflation expectations are have again weakened over the summer. “In the coming months, low inflation will remain one of the main topics for European central bankers,” says Deka’s CIO, Frank Hagenstein. “And we expect the ECB to keep interest rates at this historically low level for a significant period of time.”

The end of US QE in the latter part of 2014 provided the dollar with an initial boost and, as far as the ECB was concerned, a welcome weakening in the value of the euro. But the single currency’s more recent downward trend has been halted as emerging market currencies have weakened (see figure). Indeed the euro’s trade-weighted index has risen by about 7% since July. Although the ECB has no stated policy target with regard to the exchange rate, it is said to be “very important for price stability and growth”, and most would agree that the recent strengthening of the currency would not be ideal either for the economy or inflation expectations.

Whereas economic growth is appearing in the euro-zone, many argue that it is not yet strong enough. “Although we are now seeing credit growth, we are not quite sure if Europe is yet achieving a recovery momentum; it all seems too fragile at the moment,” says Benhaim. 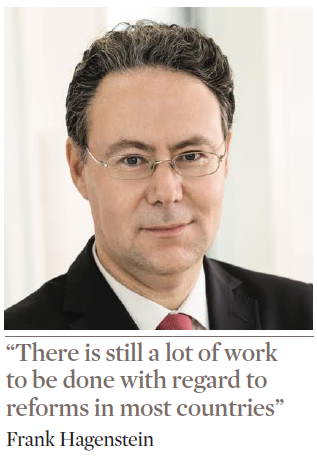 Others take a slightly more optimistic view pointing to consumers benefitting from the windfall of lower commodity prices, and the decent results posted by many European companies over the first two quarters of 2015. But this overall upbeat outlook may still be painting too bright a picture, and Hagenstein points out that, whilst the growth may well be sustainable, it is not at a high level and is unevenly distributed across member countries. “And there is still a lot of work to be done with regard to reforms in most countries,” he adds.

Pictet’s Benhaim agrees, adding that many may be running out of time. “The ECB’s actions have successfully compressed bond premia and have, effectively, bought the euro-zone governments time, but we need to see action. Whilst progress towards structural reform in Spain, Portugal and Ireland has been quite pleasing, Italy and France just have to do more.”

The euro-zone’s lack of homogeneity – on so many levels – is a recurring theme for fixed income managers, and a source of concern about the stability of bond markets. Although there is certainly relief that some sort of resolution has been reached, few believe that the Greek crisis has been fully resolved. Deka, for example, is concerned that even after a possibly ‘successful’ election there is a real possibility that Greece will not – or might be unable to – remain compliant with the programme’s rules and that the debt burden could still prove too high.

And, in the next few months, elections in Portugal and in Spain will be watched carefully, to see if they challenge the new consensus that anti-austerity parties are losing both popular support and political momentum.

It seems unlikely that European bond yields will move against the direction of US Treasury yields, but many managers are forecasting some degree of outperformance by Europe. Robeco is more bullish than some, as unlike others it sees the potential for long US rates to decline, forecasting a bull flattening as the Fed raises rates. “We would be very selective on maturity and would avoid the short end,” says van Trigt. “But with low growth – perhaps to be revised lower on the back of events in the Far East – and a central bank staying ahead of the curve, we are quite constructive on US Treasuries.” 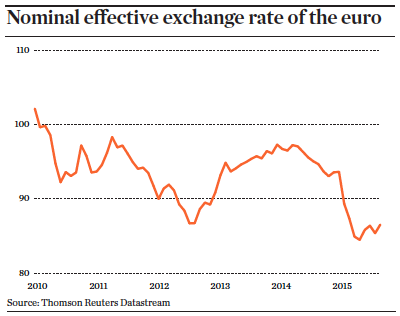 KBC Asset Management, on the other hand, says that the trend in the US will be for rising rates. However, the firm does agree that while European bond yields will likely not be able to decouple, there is probably scope for outperformance from European bonds as the US-Bund spread should widen.

Although there is even talk of the possibility that peripheral spreads could come in further, managers acknowledge that we are entering a new phase. “Yes, we could see them narrowing,” says Robeco’s van Trigt, “But those years where spreads were on a strong downward trend are behind us, we’re in a new equilibrium where spreads could just range trade.”

And in an environment where there are few strong trends, there are other dangers. According to Sandra Crowl, portfolio adviser at Carmignac, volatility will almost certainly be on the increase. “Targeting modified duration will be key given the Fed policy change,” she says. “While we are comfortable in periphery bonds today, we are nearing the end game, as yields get close to fair value. And we believe that as economic growth picks up in Europe there is sure to be more volatility in the shape of yield curves.” 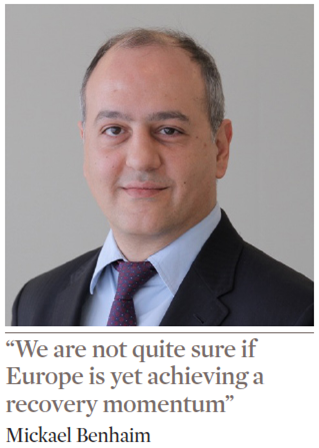 Alhough government bonds may indeed be nearly fully priced, KBC Asset Management’s Geris points out that there is unlikely to be any sudden massive shift away from them, given the new and tighter regulations for both banks and insurance companies, for example.

Hagenstein argues that as the lower bound in both official and market rates is reached, with no trend in either direction left, there is a possibility that market participants will themselves create additional volatility.

The times have changed for European bond markets, but that does not appear to mean an era of calm lies ahead. Fixed income managers, though battle-worn, are staying on alert for possible torrid times, with cautious positioning in case of apparently random bouts of volatility coming at them from politics or macroeconomics, from within the euro-zone and from outside.