Everything is still possible

Markets are on edge as a result of difficult economic and geopolitical forces. Risks are still skewed to the downside. Trade tensions have not abated, rather there is a possibility of further escalation in the future, which looks like reducing investment, and damaging already apprehensive outlooks.

Consumer spending – which accounts for about two-thirds of US GDP – is the mainstay of the US economy and, unlike other sectors, the US consumer has continued spending, with personal consumer expenditure maintaining a steady 4% year-on-year increase over the course of this year. This buoyancy probably reflects tight labour markets and upward forces on wages.

Historically, global recessions start within the US domestic economy and it would be unusual for this to not continue. The slowdown already being felt across the rest of the world and now in US manufacturing and industrial sectors, could be cooling US labour markets. There may be signs of this in the latest employment data, but the figures are mixed enough to keep forecasts murky.

Politics around the world continues to confound opinion polls and expectations, reminding us that anything can happen. That a new coalition formed in Italy, against strong odds, provided relief to European financial markets. 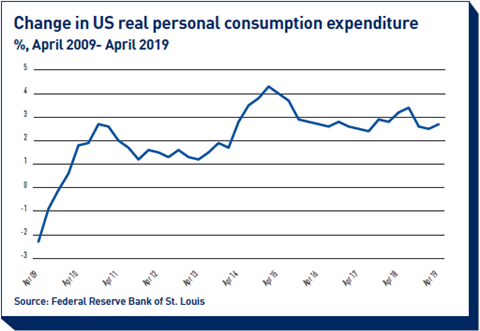 On the other hand, the defeat of the incumbent in Argentina’s August primary elections, triggered sell-offs in stocks, bonds and, most alarmingly, the currency, which leaves the economy in a perilous situation (see below), with debt re-profiling plans brought forward by the present government, and further difficult negotiations with the International Monetary Fund (IMF).

Although the US yield curve’s degree of disinversion has diminished, some economists argue that the inversion may not necessarily be the recession signal it has been previously. With government bond yields so low across so much of the rest of the world – about one-third of government bond yields are now negative – US yields are being dragged lower.

Instead, they point to healthy US growth supported by strong consumer spending. They suggest monetary policy is not excessively tight and that the US Federal Reserve will not cut rates by as much as the forwards are suggesting (100bps over the next 12 months).

The European Central Bank (ECB), in full easing mode, delivered a comprehensive package of measures in September. The 10bps rate cut (reducing the rate to an all-time low), the introduction of both deposit tiering, a lengthening in the targeted longer-term refinancing operations (TLTROs) and the reintroduction of quantitative easing (QE) were well received, and confirmed the ECB’s dovish stance.

The ECB has been closely watching market-based inflation expectations – that is five-year/five-year inflation swaps – steadily declining over recent months. And the new forward guidance is now open-ended and states that interest rates will remain low only when there is a “robust” convergence of this inflation expectation figure back up towards 2%.

Turbulent politics, and economics have again brought Argentina to the fore for investors, with the primary election defeat for President Mauricio Macri in August suggesting he will also lose October’s general election.

The big dislocations in financial markets have damaged sentiment, with inflation forecasts revised up as well as predictions of a deep and long recession. The central bank has introduced various controls and restrictions on capital movement.

Although Argentinian financial assets fell dramatically initially, stability has returned and, importantly, it appears external investors have not been desperately pulling their funds out of the country, for now, with one eye perhaps on the shrinking universe of positive-yielding assets. This calm could prove temporary, for example if MSCI decides to alter Argentina’s emerging market status in view of the movement of capital restrictions, the ensuing index adjustments could create turmoil.

Last year’s record-breaking $57bn (€52bn) IMF loan came with stringent, and unpopular, strings attached, as well as sweeping austerity measures designed to achieve a zero deficit in 2019. Many Argentinians already hold the IMF, and other supranational lending organisations, in low regard, blaming their influence for creating the country’s worse economic crisis in 2001.

That Argentina was struggling to repay the loan just one year after the IMF granted it raises some possibly troubling questions as to how such a huge disbursement was granted in the first place. However, most pressing is how the Argentinian Treasury’s significant hard-currency needs will be met over the coming months, and the risks of a serious debt event are high.

President Draghi persuaded his council to act using the full range of monetary policy tools to hand. However, his comments on the need for fiscal policy to become the main tool were the most game-changing.

Currencies
While Bank of England governor Carney likened the volatility of the pound to that of an emerging market currency, the mayhem in UK politics continues to develop at a startling pace.

The near-constant stream of potentially market-moving news, be that about High Court rulings, or of the Members of Parliament (MPs) gaining more control, or of Prime Minister Johnson kicking out Conservative ‘rebels’, means forming any firm view on sterling is still difficult.

Although MPs may have ensured that chances of a no-deal are lessened – which may be better news for sterling – the UK leaving the EU without any deal remains a likely outcome. On the other hand, the release of papers showing the supply problems the UK might endure after a no-deal exit perhaps strengthen the odds of Johnson going for a compromise with the EU. Added to it all, uncertainties around the timing of any exit has risen.

With a Labour-run government deemed negative for the currency, recent polls suggesting a favourable general election outcome for the Conservatives ought to be more supportive. But, with so many downward, and upward, and rapidly changing forces working at once, forecasting a short or medium-term trend is impossible.

Meanwhile, the Chinese currency has stabilised, with the dollar-renminbi rate staying above 7.0. The easing measures announced by the Chinese authorities, anxious to ensure the scene is set for a stirring 70th National Day, have been favourably greeted by markets, and have added to the sense of economic stability. That said, the headwinds facing the Chinese economy are still strong, and few forecasters are predicting strong growth.

As for the US currency, as long as the other leading central banks, such as the ECB continue to ‘out-ease’ the Fed, and despite President Trump’s displeasure, it is unlikely that the dollar can lose much ground against other leading currencies, or indeed the emerging market complex. 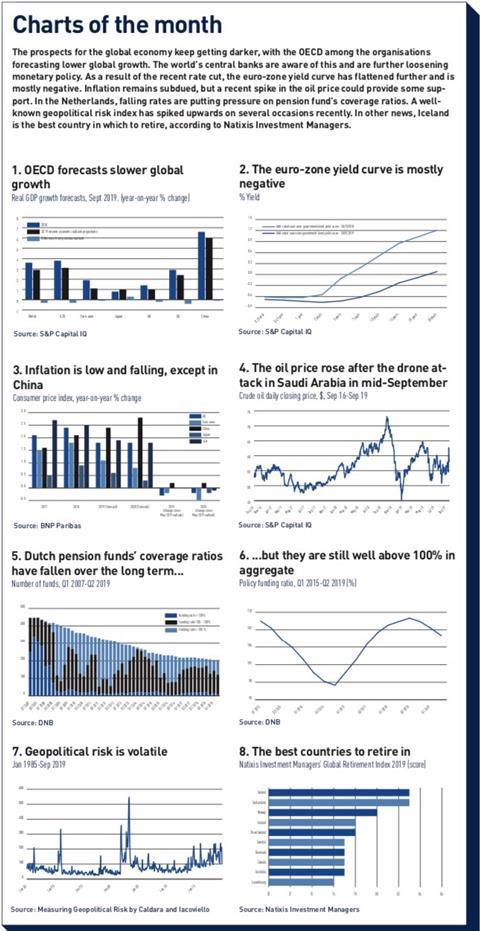