Not many predicted the equity sell-off at the start of the fourth quarter, and there is still puzzlement as to what triggered it. Although US Federal Reserve chairman Jerome Powell might have sounded more hawkish than previously, which may have pushed longer interest rates higher, the question would then be why, although all rates rose, the US yield curve essentially bear-steepened, a rare occurrence at this stage in a hiking cycle. There seems little evidence of the Fed being behind the curve.

Many are asking whether it marks the end of the US equity bull run. Some dismiss the notion of the US economy entering a paradigm of long-term, strong and sustained economic growth. They argue that this year’s growth surge is the result of the Trump administration’s deficit-expanding fiscal boost, combined with corporate front-running ahead of potential trade tariffs.

As well as the macro, politics will continue to be influential. November’s US mid-term elections are unlikely to be game changers, although they could add to uncertainty. Whether or not the Democrats take the Senate, President Trump’s power regarding trade sanctions will remain. The threat of further retaliation will remain high on investor concerns, with China’s reaction remaining critical.

Meanwhile, the clock is ticking towards Britain’s EU exit, several EU summits, a G20 gathering and a meeting of the OPEC oil producers, as well as controversial EU budgetary submissions. This quarter is busy.

Normally, the prospect of higher policy rates could flatten a yield curve, maybe inverting it, but not now. The rise in US Treasury yields through October has taken the spread between the US 10-year and the average of the rest of the developed market 10-year to its highest levels since 2000. And US real, inflation-adjusted, rates have also been moving higher, almost in tandem with nominal rates across the curve.

Although there are now worries about US inflation surprising to the upside, and 5-year/5-year inflation expectations have risen from the deflationary days of 2016, but it has been a slow grind and expectations are not much higher than a year ago. In addition, in October’s University of Michigan’s consumer sentiment survey, consumers’ expectations for inflation in five to 10 years’ time, were at their lowest level since the series began, more than 40 years ago.

The longer the US economy runs on (virtually) full employment, it seems plausible to suppose that inflationary pressures should be rising, as described by the Phillips Curve relationship. However, Fed chair Powell has argued that consumer price inflation does not have to rise as a result of higher wages, saying that in his view, “many factors, including better conduct of monetary policy.… have greatly reduced, but not eliminated, the effects that tight labour markets might have on inflation”. Wisely, he also mentioned that, “common sense suggests we should beware when forecasts predict events seldom before observed in the economy”.

For Europe, too, 5yr/5yr real rates – as measured using inflation swaps – have been rising. Unlike in the US, longer-term inflation expectations have been trending lower for the past four or five months, although the rising oil price may have boosted expectations. 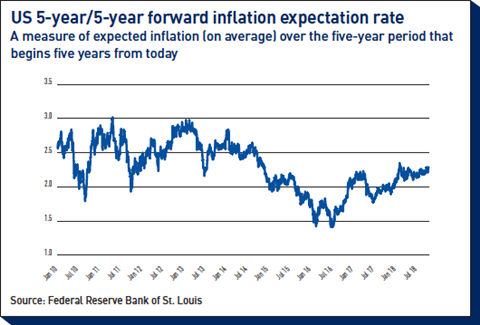 Although US rates and oil prices are rising, the dollar’s broad index has remained in the narrow range in place since the summer. Perhaps this strength reflects the economic growth narrative, and a more hawkish Fed, that investors are already positioned long.

While the dollar is well-owned, investors seem prepared to hang on to their dollars for longer. However, any further appreciation is unlikely to be across the foreign exchange board, as the Fed continues shrinking its balance sheet, volatilities rise, and the US stock market wavers again. Those hardest hit will be currencies whose economies are dependent on external capital flows, such as many emerging markets and the Australian dollar. Conversely, exporters of capital, such as Japan, may see their currencies rise more than the dollar, as the risk-off mentality persists and repatriation flows increase.

The Reserve Bank of Australia (RBA) has kept its cash rate at 1.5% for two years, the longest period of inaction in its history. In its recent Financial Stability Review, the RBA is positive, with an economy in good shape, solid financial conditions and unemployment at its lowest level since 2012.

However, Australia has a few specific risks, not just the trading relationship with China, but household debt and the financial resilience, or otherwise, of its banks. The banks’ reliance on wholesale funding has been increasing, as the banks’ funding gap between retail deposits and (bank) lending has grown. This is a vulnerability that could compromise Australia’s banks in times of stress, and become a deterrent to international investors if global risk aversion rises.

In January 2013, months after the start of the investigations into manipulations of inter-bank offered rate benchmarks, the International Organization of Securities Commissions (IOSCO) published its report on Financial Benchmarks to develop global principles on benchmark-related issues, guidelines which were published in July 2013.

The replacement of all the benchmark IBORs, timetabled for completion by the end of 2021, is a complex process. Although hard to assess, the amount of securities linked in some way to an IBOR, whether in derivatives, collateralised loan obligations (CLOs) or credit markets, runs into trillions of euros.

So far, several jurisdictions have introduced new rates to replace the IBORs, such as the US’s Secured Overnight Funding Rate (SOFR), and the Sterling Overnight Index Average (SONIA) in the UK. Indeed Fannie Mae, in July, issued the first-ever debt transaction linked to SOFR, a $6bn (€5.2bn) floating-rate bond with varying maturities.

Europe has approached the process from a different angle. The European Benchmark Regulation (BMR), based on the IOSCO standards, introduced in June 2016, came into effect at the start of 2018, eclipsed by the EU’s MiFID II directive. The BMR will be no less far reaching, and might provide the blueprint for other jurisdictions to follow.

As recently as September, the EU announced that the Euro Short-Term Rate (ESTER), to be administered by the European Central Bank, was “the most appropriate future euro risk-free rate” and is expected to be operational by the third quarter of 2019. It will replace the Euro Overnight Index Average (EONIA).

Regulators will get their way, and all interbank offered rates will be extricated then banished. There are, however, many who argue that the complexity of the process is underestimated and that the current timetables are too ambitious, with so much at stake for so many.