Donald Trump’s surprise election to the US presidency was the result, in part, of the votes of a disenfranchised and disgruntled US electorate. Many felt left behind by the increasing forces of globalisation and ignored by their ruling classes. It caused many shockwaves.

Few predicted that so soon after the vote the stock market would get back into its (post-financial crisis) bullish trend, leaving aside worries about protectionism or inward-looking policies. In the year since the election, the S&P500 returned 21%, putting it fourth-best compared with previous presidents’ first 12 months in office. That is some distance behind top-ranked Bill Clinton (a 32% return over the period) but a strong figure, nevertheless, and one that boasts the lowest volatility in 50 years.

Politicians across the world like to take credit for healthy economies and strong stock markets. However, the benign global economic environment may have more to do with the low level of interest rates and exceptionally low realised volatilities.

The unwinding of quantitative easing (QE) may not prompt tumultuous change in monetary policy. Jerome Powell, nominated as the new chair of the Federal Reserve, is unlikely to change policy direction too much. In addition, the European Central Bank (ECB) is at pains to assure markets that its tapering will not cause a market tantrum. However, markets are still apprehensive that, with valuations already so high, the path should be sustainable.

China’s Communist Party affirmed the elevated status of President Xi Jinping within the organisation, arguably making him China’s most powerful leader since Mao Zedong. Some argue that under President Xi the country has become more authoritarian and less respectful of human rights. But Xi is seen as a steady moderniser in relation to the economy and someone who would like China’s world voice to be heard more.

BONDS
In the decade since the Bank of England last hiked rates, European investment-grade credit spreads have reached post-crisis lows, and are nearing pre-financial crisis lows of 2006. US investment-grade spreads are also as low as they have been since mid-2007, although rates were, of course, 200 basis points higher back then.

The surprisingly dovish tone of October’s ECB press conference comforted risk markets and sustained the narrowing trend. Also aiding credit was the confirmation that the bank’s corporate bond purchases were to be continued. There was no clarification as to the composition of the overall asset purchases, given the supply constraints approaching in specific government markets. But there is an assumption that the ECB’s corporate bond-buying can and will take up any slack. The ECB has already bought about €120bn of corporate bonds, which represents 5% of the total euro investment-grade credit market.

While investors may be expressing more caution the longer this bull market runs, surveys suggest that most investors are still overweight credit. It is a stance that has clearly been rewarding thus far.

Earnings in Europe have so far been reasonable, so bestowing a degree of comfort to wavering would-be corporate bond investors. However, with low premia offering such thin cushions of protection, it might not take  much to knock confidence in the market.

CURRENCIES
The dollar’s post-summer rally may be losing momentum. The currency has already benefitted from the possibility of (modest) tax reforms, and the imminent appointment of a relatively neutral Fed chair in Jerome Powell. With economic growth continuing to pick up throughout the rest of the world, investment opportunities outside the US are looking increasingly attractive.

The ECB’s dovish stance, and its repeated commitment that it would react to future signs of economic weakness, is clearly supportive for risk, and may attract new buyers of European assets.

The New Zealand general election has delivered a coalition between Labour, the populist New Zealand First party and the Greens. There is also a new prime minister, Labour’s Jacinda Arden, who is the country’s youngest premier since 1856. The New Zealand dollar weakened markedly on the formation of the new government. This was the result of worries of some of the implications of the coalition plans for looser fiscal policy, as well as potential changes to migration policy.

The sell-off also reflected fears that Arden wants to alter the central bank’s 30-year-old inflation-targeting mandate. The changes, mooted pre-election, include giving the bank a dual mandate in addition to setting official rates through a committee. Both the US and Australian central banks already operate with dual mandates, targeting inflation and employment. So having both does not necessarily herald a change for the worse in terms of central bank respectability.

Some say that New Zealand will choose to embark on a fundamentally different path to the one it has followed over the past three decades. Higher inflation, perhaps through increasing the minimum wage, looks set to be tolerated if it brings with it higher employment. Rising domestic prices will erode the external value of the currency. This will surely damage the central bank’s hard-won international credibility and could hurt the currency.

Maybe New Zealand will be at the forefront of economic management change, where the old guard of globalisation, free movement of goods and people is discredited because it failed to benefit society enough. President Trump may be looking to New Zealand for guidance on keeping the popular vote.

Oil and other commodities have underperformed most other asset classes over the past four years. This was the result of a combination of several factors: QE-generated liquidity, boosting financial markets generally; the lack of synchronised global economic growth; and a glut of oil supplies created by an excess of oil production throughout the world. 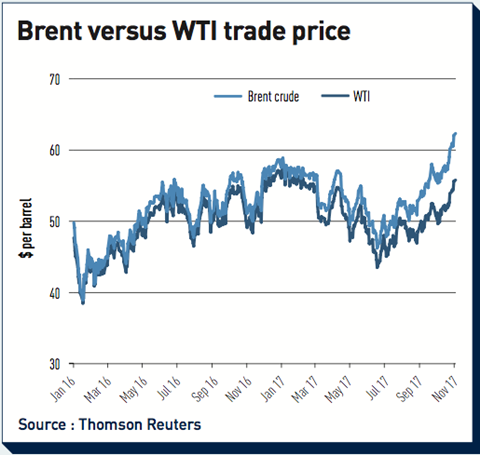 A longer-term decrease in commodity demand globally is anticipated from the shifting of the Chinese economy away from its erstwhile commodities-intensive growth model to more consumption. Although the impact on oil demand is debatable, as Chinese consumers gain access to, for example, both cars with better engines and more air travel.

More recently, several factors have driven a rebound in the oil price. Improving economic growth across the world has increased demand for oil. There have also been disruptions in supply from unrest in the Kurdish region of Iraq, to the production shutdowns in the Gulf of Mexico owing to the hurricanes.

Although Brent and West Texas Intermediate (WTI) usually trade reasonably closely, there can be dislocations. Most of the world’s crude oil market, including Europe, the Middle East, Russia and Africa, considers Brent as the benchmark. During the Arab Spring of 2011, Brent’s premium over WTI rose to over $25 a barrel because of worries over the stability of supply. At about the same time, shale oil production started coming online, boosting WTI supply.

The difference then declined to about $3 in either direction until August (see chart). The recent widening may relate to hurricane safety shutdowns at US refineries which resulted in a glut of raw WTI oil awaiting transit to the refineries. Or it could reflect increased US shale oil production which, using fracking techniques, extracts oil cheaper than conventional drilling. It has also led to a boom in US oil exports.

Estimating the differential is not easy, as it involves so many variables, both economic and geopolitical. Forecasting the oil price over the coming months may be more straightforward, particularly as we approach the $1trn Saudi Aramco IPO, due next spring. Saudi Arabia will presumably be keen for the oil price to at least hang on to its recent gains.