After the ‘Goldilocks’ conditions of 2017 it was perhaps inevitable 2018 would prove trickier for investors. However, few predicted the year would be so grim, with fixed income, credit and commodities together posting the most miserable returns in decades, and cash was king in dollar terms.

Looking forward, many published forecasts begin by pointing out that there may be hope for 2019, not least because valuations, across a broad range of asset classes, have fallen as markets have dipped recently.

There is not much economic homogeneity across the world, with mixed macro fundamentals. Growth numbers in Europe are worrying, while China looks particularly vulnerable. Europe’s economic numbers were disappointing after a healthy 2017. The strength in the US economy that year was able to offset much of the global weakness but 2019 will definitely be more challenging. 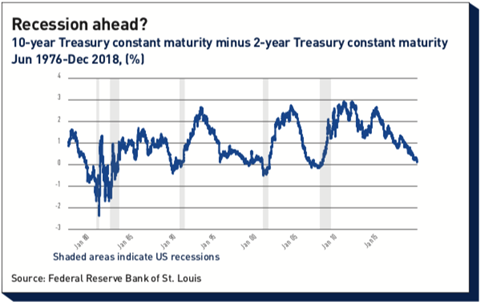 While the US economic growth rate may have peaked for this cycle, there could be sufficient momentum for growth to stay reasonably buoyant for longer. There are, however, signs that conditions in the US housing market might be deteriorating. On the other hand, after a huge decade-long bull run, US domestic investors will still be sitting on healthy stock market profits, despite the ups and downs of 2018. They may not be feeling significantly ‘poorer’ nor be any more worried about employment prospects, leaving US consumption to continue apace.

Geopolitics looks set to matter hugely again in 2019. US-China trade tensions will surely reignite, Europe’s angry populism will not abate and there will be some sort of outcome for the Brexit saga. Add in simmering strains between Russia and the Ukraine, sanctions on Iran and a US president perhaps under siege at home, not to mention an era-ending change of leadership for Germany’s Christian Democrats, and 2019 could well be another tumultuous year.

The US Federal Reserve will hike rates more than once in 2019 – on that, most agree. There is, however, not much consensus on how many moves there will be. Some argue that the Fed will maintain its hawkish stance, while others maintain that there may have been a softening in its view. The latter camp highlights some of the more recent statements which emphasised that the Fed will react to data as it emerges.

That the European Central Bank (ECB) will tighten in 2019 is much less clear, although there is some agreement that there will be a hike in the third quarter. The weakness in many Purchasing Managers’ Index (PMI) figures across Europe in the second half of 2018 is a cause for concern and might translate into weaker GDP figures.

But it is not yet clear what was the underlying cause of the weakness, whether or not it captured corporate fears about an escalating trade war, or perhaps a decline in household sentiment. It is, for example, just possible that a large ‘blip’ in German car manufacturing was indeed driven by one-off factors associated with retooling for the switch to Worldwide Harmonised Light Vehicle Test Protocol (WLTP).

The ECB is tiptoeing a delicate path between, on the one hand, seeing through recent temporary weakness and emphasising generally robust domestic demand and, on the other, acknowledging increasing risks to the downside.

Although much was different between 2017 and 2018, the multi-year trend of a flattening US yield curve remained. The curve is now so flat that there are questions about whether it will trend to inversion, and, if it does, what that could imply about recessionary risks in the US.

The yield curve’s uncanny ‘ability’ to predict recessions is legendary. However, might this time be different? With yields much lower generally as a result of quantitative easing (QE) and also the success of central banks at keeping inflation low, which has depressed term premia, maybe the flatness of the curve will not be the usual prelude to inversion. Alternatively, perhaps with term premia now so low, flat yield curves will become more ‘normal’ and not necessarily a clear stage on the way to inversion.

With disappointing signs of weakness from across Europe, combined with signs of growth wobbles in China and the strong performance from the US economy, 2018 turned in to a pretty good year for the dollar. The DXY index, measuring the value of the dollar against a basket of currencies, was up over 7%.

Looking ahead, the dollar may well hold its place at the top for a while longer, although many argue that 2019 may well see the deck chairs move in favour of other reserve currencies in particular. Two important supports for the dollar look set to be eroded somewhat. With no more US tax cuts in the offing, growth differentials between the US and the rest of the world are narrowing, and 2019 might also see some converging of interest rate differentials.

Historically, there is a reasonably strong link between the dollar-yen exchange rate and the respective interest rate differential. Over the past decade, however, this relationship has been notably weaker, and particularly through 2018, when the connection was virtually absent.

Acknowledging central banks’ huge QE operations might have had a long-term influence in distorting interest rates. Other influential triggers along the way included the start of the Greece crisis in 2010, and the realisation in 2012 that Japan’s prime minister Shinzo Abe would probably secure a second term of further monetary easing.

The health of China’s economy is crucial to the vitality of the capital markets. Entering 2019, there is a lot of nervousness and not all related to the trade tensions. Although the trade-war truce is holding, the fragility of emerging market (EM) sentiment is such that problems in China, following 2018’s many storms in Turkey, Mexico and South Africa could prove damaging both to the EM universe and the inter-connected world beyond.

China’s policymakers do acknowledge the economy’s debt problem – China is currently burdened with a debt-to-GDP ratio of 250% – and their stated aim is to bring systemic risks and macro leverage under control. At the same, they are seeking to rebalance the economy from investment to consumption.

Government policy options – fiscal, monetary and regulatory – must be carefully executed to balance this pro-growth stance with desperately needed deleveraging. Arguably, the policymakers have been a little too vigorous in tightening credit conditions and, together with the external shock of an escalation in US trade tensions, China’s economic outlook has deteriorated. In 2018 there was marked slowing in infrastructure investment, the housing market and the auto sector.

With a slowing global economic cycle, 2019 looks like being an even more difficult year for policymakers. Not many would be surprised if negotiations during the 90-day trade-war truce did not make significant progress. President Xi Jinping has shown himself to be unafraid of world opinion when standing up to the US. He will, however, be aware of the need to protect his own economy from the potentially wide-ranging fallout of a brutal trade war with the US. 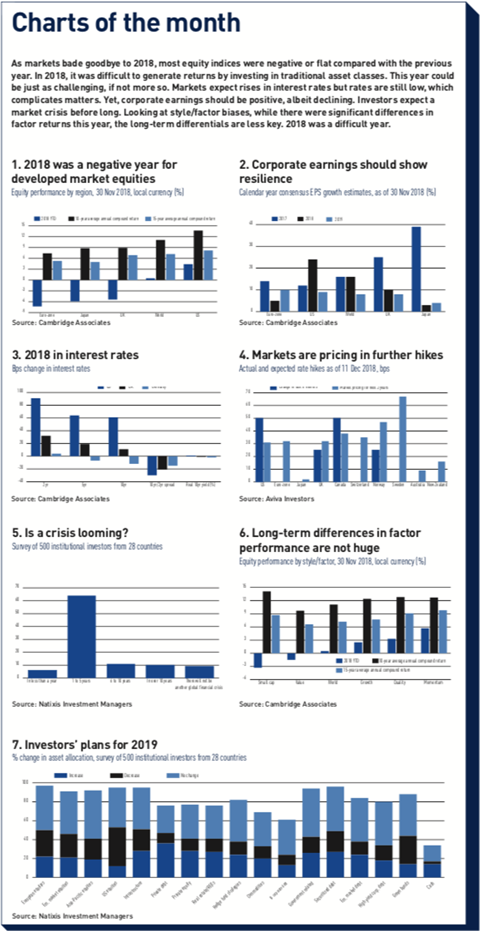