The reaction and aftermath to the US Federal Reserve’s dovish pivot appears to be more focused on the monetary policy news itself and the ‘fuel’ of easy money.

In Europe, on the other hand, the market’s take on the words and actions from the European Central Bank (ECB) has been to concentrate on the gloomy economic outlook as well as the sharp downward revisions to its GDP projections and inflation forecasts. There was not much of a carefree ‘risk-on’ reaction.

Markets may be doubting the ECB’s “whatever it takes” mantra, and that the new targeted longer-term refinancing operations (TLTFO) and the extension to the forward guidance may be insufficient, at this time, in the face of the dismal data. While ECB president Mario Draghi was downbeat in his assessment of the poorer growth outlook, he appeared to go out of his way to convey his concerns about downside risks, despite the ECB’s easing moves.

Perhaps it was also the gloomy news coming out of Japan that worried observers. They were already concerned that the structural trend in Europe’s growth and inflation was following in the footsteps of Japan’s long-standing fight against deflation.

Following the recent sharp fall in Japan’s business conditions index, media reports there have been speculating whether the economy might be in recession again. 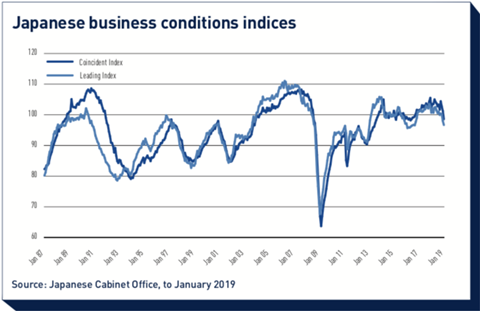 Japanese economic growth has been particularly damaged by the shock waves from the US-China trade dispute, as well as by the slowdown in China, a vital trading partner for Japan. Whether or not growth in 2019 can stave off recession, it is clear that the Bank of Japan will need to maintain an easing policy and, potentially, be prepared to ease even more.

The Fed’s recent shift to a softer stance on inflation – tolerating a higher level for longer – would nominally be a concern for longer-dated Treasuries and yield curves might be expected to steepen, particularly as long as shorter rates remained anchored to an unmoving Fed.

The more dovish stance from the ECB, on the other hand, argues for lower (core) rates not just at the short end, but potentially along the length of the curve. However, if – arguably quite a big ‘if’ – there is a resurgence of inflation, then we might expect steeper curves in Europe as well.

But rising inflation is not, at this time, top of mind for investors watching the European economies. While markets have moved back their timetables for future rate hikes, acknowledging the easing bias of the ECB, there is perhaps growing concern that the measures will again not be enough.

Corporate debt and the swarm of BBBs

The Fed recently updated its Financial Accounts of the United States which, though backward looking, give a clear overview of some of the important trends in financial developments, including the US corporate credit market.

According to the accounts, in 2018 bonds issued by non-financial corporations rose to a new record high of $5.5trn (€4.9trn). And, after stellar growth since 2008, BBB-rated bonds account for about half of that total. Separately, the amount of leveraged loans has also rapidly increased, particularly over the last few years.

Concerns about the all-time-high ratio of corporate debt to GDP, within both corporate bonds and leveraged loans universes, fears of balance sheets becoming overstretched have triggered much comment from central bankers. Many are also concerned about so much BBB debt within investment grade, wondering what this ‘bubble’ could do when downgrades start to accelerate.

Optimistic observers argue that leverage fears are overblown in the US because headlines do not account for interest coverage, strong profits and a significantly lower reliance on short-term debt.

In the euro investment-grade market, the share of BBB-rated bonds has grown even faster than in the US since 2010, from about 12% to the current level of over 40%. Unlike the US, Europe has not seen a great increase in leverage across the corporate sector, possibly because of a combination of weaker economic growth and the volatile political backdrop.

Another noteworthy development within euro investment grade is the growth of mega-cap issuers, here defined as those with outstanding notional debt in excess of €12bn, a significant number of which carry BBB ratings.

Less-than-ideal secondary liquidity is a recurring feature in Europe’s credit market, particularly since the financial crisis. Though the smaller corporate debt issues tend to have a larger liquidity premium, that is a wider bid-offer spread, in times of market stress some studies suggest bid-offer spreads of the mega caps, most notably the BBB-rated paper, have tended to widen disproportionately, an unwelcome and potentially disruptive feature.

With rising unemployment and falling inflation projections, a ‘conventional’ central bank response, in line with the Taylor rule, might have been a significant cut in

interest rates. But constrained by near-zero interest rates, the ECB’s lack of choices and available unconventional tools is brought once again into focus.

Though highlighting the range of domestic and external risks facing the European economy, the ECB is still projecting a pick-up in growth in the latter half of 2019. If this growth fails to materialise, the incoming ECB president will be under pressure to ‘do what it takes’.

Adding to the complexity of understanding what is driving markets is getting hold of timely information about the real economy. Hard data has been difficult to interpret of late, especially with the US-government shutdown causing considerable distortions to US data. Global politics has also become more volatile, particularly in Europe.

Contrasting the gloom of Draghi’s speech, People’s Bank of China governor Yi Gang told the 13th National People’s Congress (NPC) that the Chinese economy still faced a challenging environment. However, he said that future risks and uncertainties have diminished from 12 months ago.

Instead of talking of further cutting nominal interest rates, Yi referred to reducing the high-risk premia small and medium enterprises were having to pay on their borrowings, by ongoing interest-rate liberalisation as well as supply-side reform to reduce transaction costs.

At the NPC, target growth of 6-6.5% was announced for 2019, which was in line with expectations. To achieve the target, significant fiscal policy announcements were made, including a significant cut in the VAT for manufacturing industries, while the deficit-to-GDP target increased from 2.6% last year to 2.8% this year.

On official currency policy, there were no new announcements or targets, so still stability for the renminbi within a reasonable range, coupled with assurances that competitive currency depreciations would not be used, in line with G20 agreements.

Since the start of this year, it seems that the Chinese authorities have been pushing back against strength in the currency, possibly as a result of some early stronger economic data, or possibly linked to index inclusion moves.

Though the authorities are trying hard to emphasise all the positives in their policy moves, it seems a little early to be forecasting the start of steady recovery for the Chinese economy