The European Central Bank (ECB) has restarted quantitative easing (QE), pledging to buy €20bn of securities a month from 1 November “for as long as necessary to reinforce the accommodative impact of policy rates”, it announced today.

In his penultimate scheduled press conference as president of the central bank, Mario Draghi said the ECB’s governing council “continues to stand ready to adjust all of its instruments, as appropriate, to ensure that inflation moves towards its aim in a sustained manner”.

The ECB said in its official announcement that it expected interest rates to “remain at their present or lower levels” until the inflation outlook was “sufficiently close to” 2%.

Economists and fund managers said the fresh round of QE could prove supportive for corporate bond prices as well as government bonds, especially given that the ECB has not set an end date for the stimulus. 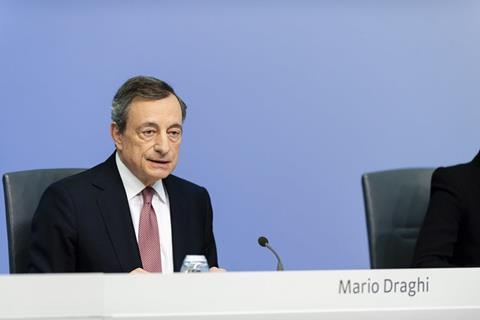 Thomas Sartain, senior portfolio manager at Invesco, said: “While the scale of purchases and rate cut delivered were at the lower end of market expectation, the commitment to asset purchases for an open-ended timeframe is a clear dovish surprise from the ECB.

“After a summer of elevated uncertainty and high levels of volatility in financial markets, these actions should be positive for broader risk sentiment, and should support government and corporate bond spreads in European fixed income.”

“If asset purchases are focused on corporate debt, the market impact will be even more powerful,” she added. “Today’s decision may also favour high yielding emerging market debt as investors extend and intensify their search for yield.”

David Zahn, head of European fixed income at Franklin Templeton, said the asset purchase programme would focus on government securities “but probably with more focus on corporate bonds than previously”.

In addition to QE and an interest rate cut, the ECB took measures to soften the impact of the reduction in the deposit rate for lenders, through a “two-tier system for reserve remuneration”. This would mean some of a bank’s excess liquidity holdings would be exempt from the negative rate, the ECB said.