As sometimes happens with Easter, one of the surveys of the UK pensions accounting landscape from consultants Lane Clark & Peacock (LCP) was later than usual. And, like an Easter egg, this keenly awaited overview of the net funding position of FTSE 100 defined benefit (DB) pension schemes comes in two halves.

On the one hand, before the lockdown of economic and social life in response to the COVID-19 pandemic, a large number of FTSE 100 pension schemes were in a relatively healthy position. Most reported a surplus in their company accounts.

Some 60% of sponsors had reported an accounting surplus in their pension scheme on an IAS19 (International Accounting Standard 19, Employee Benefits) accounting basis for 2019. This figure rose to 70% in surplus – their best position for 20 years – by this March. All that was to change just one month later when that figure again fell below 60% as the pandemic struck.

Moreover, the LCP analysis shows that between 10 March and 18 March, debt-market volatility and rising interest rates wiped £150bn (€167bn) from total pension liabilities as investors sought a safe haven in fixed income. As at the survey date, this effectively balances out the first quarter’s precipitous falls on global equity markets.

Indeed, LCP has found that two particular factors shielded the FTSE 100 scheme sponsors from the worst effects of recent market turmoil. First, their combined asset holdings were split 60/20 in favour of bonds over equities – against the position in 2002, when just over 60% of fund assets were allocated to equities and less than 30% to bonds. Second, funds with extensive hedging strategies saw liabilities reduced.

Meanwhile, away from the market turmoil, the LCP survey’s findings on inflation and mortality also warrant closer inspection. Inflation is a particularly important assumption for UK DB scheme sponsors because many offer inflation-linked benefits. LCP found sponsors had based their IAS 19 assumptions on a breakeven inflation figure of 3.2% less an inflation risk premium of between 0.2-0.3%.

They also noted that this risk premium was slightly higher than previously. The suggestion was it could “be as a result of the increased uncertainty in the market and the perception that perhaps investors require additional returns if they were to hold inflationary risks in the current climate”.

The report then picked up on the fact that UK sponsors are beginning to adapt their IAS 19 assumptions to retail price index (RPI) inflation reform in their domestic market. This suggests the metric will eventually be replaced by consumer price inflation which includes owner occupiers’ housing costs (CPIH) measure. A consultation on this move ended in August and interested parties are awaiting a formal policy response from the government.

Inflation assumptions and reform were an important feature of the August 2020 Hymans Robertson pensions accounting survey of FTSE 350 companies – a wider pool than the LCP report. Moreover, given the emerging debate over policymakers’ ambitions not only in the UK but also in the US and the EU to encourage some price growth, their analysis also doubles as a timely reminder of the assumption’s current and, perhaps greater, future relevance.

Another reason why inflation is pivotal is that it typically drives other assumptions such as salary growth, deferred revaluation and index-linked pension increases. As a rule of thumb, a higher inflation figure increases pension liabilities.

So what of the impact of the COVID-19 pandemic on this assumption? Well, more broadly, the firm noted “[r]educed economic activity has resulted in a decrease in short-term inflation” with a “notable fall in longer term RPI expectations in March”. And it expected COVID-19 and uncertainty over the UK government’s planned reform of RPI to hang over the longer-term market views on inflation.

Another point of relevance to this reform is the movement in the so-called wedge – the difference between RPI and CPI – which Hymans said had come in lower at 0.9%. They said this could reflect market reaction to the prospect of reforms to UK RPI. Furthermore, just 12% of sponsors in the Hymans survey had a wedge of 1.1%, with the assumption ranging from 0.5% to 1.1%. Finally, the survey data showed 77% of UK sponsors now deduct an inflation-risk premium of about 0.2%.

Among the other key accounting assumptions in the Hymans survey, RPI ranged from 2.6% to 3.4%; CPI came in between 1.8% and 2.4%; and average pensioner life expectancy of 87.2 years for men and 89 years for women.

These findings followed the release by Aon of its FTSE 350 DB accounting assumptions findings in August. Aon had a refreshing take on the old habit of reporting a headline deficit figure for its sample. Instead it reported the widening gap between the best and worst-funded FTSE 350 schemes compared with the situation last year. It summed up the position as a wake-up call for DB schemes.

Also echoing the alarm-call theme was Mercer with its rolling Pensions Risk Survey for July. This revealed UK FTSE 350 DB schemes were labouring under a total accounting deficit that had increased by £13bn between the end of June 2020 and the end of July to reach £103bn. Underneath this headline figure, total DB liabilities reached £970bn at the end of July – an increase of £13bn. Interestingly, asset values remained unchanged at £867bn. 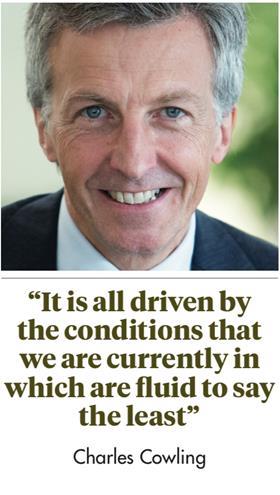 “It is all driven by the conditions that we are currently in which are fluid, to say the least,” Mercer chief actuary Charles Cowling told IPE. “In that you’ve got markets that have in some ways been pretty robust, but which have still felt the impact of COVID-19 and what that has done to the economy.

“This is a double whammy for pension schemes in that one of the ways governments have responded is to reduce interest rates to give reassurance to markets but to make it easier for people to access debt.

“For pension schemes, it really becomes a triple whammy for those businesses that are hit hardest by COVID-19 because not only have equity markets been unsettled but bond markets are staring at lower interest rates. Clearly, this feeds through into higher pension liabilities.” And just when it seems safe to look at a pensions footnote, he adds that there is a third blow in that those businesses hit hardest by the pandemic can ill afford to see deficits rise, followed by additional demands for more funding from trustees.

It might be churlish to raise the question of negative interest rates but someone must. “That is a real challenge for pension schemes because the lower the discount rate the higher the liability,” says Cowling. “There is also a practical issue because a lot of schemes are hedging their exposure to interest rates through various means. But the point is that you could argue that it doesn’t make a lot of sense to hedge liabilities as interest rates go negative and just hold cash.”

Not to mention the cost.