There was little doubt that the German finance ministry would eventually tap the green bond market. Germany is committed to reaching net zero greenhouse emissions by 2050.

There is also a host of other EU countries already issuing green bonds including France, Ireland, the Netherlands and Poland. Such sovereign bonds have already attracted high demand even from Germany’s own institutional investors.

Indeed, Germany’s green-bond market is already one of the biggest in the world. That is thanks in large part to the €20bn issuance from KfW, the state-owned development bank.

Perhaps the more pertinent question is why has it taken the German government so long? “It is not so surprising that Germany has been cautious and is not the first to market with its green-bond issuance,” says Isabelle Vic-Philippe, head of inflation duration at Amundi. She adds that Germany had to carry out a formal assessment to prove that issuing a green bond would not prove more costly to the country than a conventional issue.

Being responsible for the euro-zone’s benchmark bond market has advantages, including being able to issue at the lowest yields. But it also brings with it some more challanges. Julien Bras, fixed income portfolio manager at Allianz Global Investors (AGI), points out: “Bunds provide the reference rate for Europe and, as such, the finance ministry would have been anxious to issue the bond without creating any kind of distortions in the market, like having two different funding rates.” 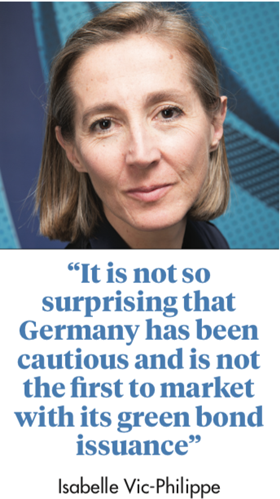 Market participants certainly appeared keen to welcome Germany’s inaugural bond. “Even though there are relatively few green sovereign bonds available, let alone those with a top credit rating, it was still slightly surprising that demand was quite that high in the end,” says Yanick Loirat, senior portfolio manager, responsible for euro sovereign investments at Neuberger Berman. He highlights the fact that the issue was more than six times oversubscribed, making it more expensive than twinned conventional bonds. And, as Vic-Philippe of Amundi says, “it is always good to have another AAA bond in the [green] market”.

Early government issuers of green bonds, such as France, have opted for a more conventional approach in tapping at selective maturity points. It is 2039 in the French case. Its green Obligations assimilables du Trésor (OAT, fungible treasury bonds) 1.75% 2039 now has about €27bn outstanding. This makes it comparable in size to one of its conventional OATs.

The stated aim of the German federal government is to offer different maturities to establish a green yield curve. That it has decided on a different approach to its green bond issuance than other sovereigns seems not to have phased investors too much.

“They have chosen this initial issue matched to an already existing Bund maturity, so that should give a very clear way to observe how the green bond’s trading, compared to the Bund, might evolve over time,” says Bras of AGI. “The twinning feature is not really that different, it should not change the pricing.”

Neuberger Berman’s Loirat says: “The twinning aspect is probably convenient for Germany to build its bond curve, as it is quite a clever way to ascertain the ‘real’ price of the green bond versus the conventional bond. Though the two twinned bonds have different ISIN [International Securities Identification Number] codes, when the finance agency comes to tap them, each will be allocated the same amount. Thus, the green bonds are implicitly included in the same curve of conventional bonds in terms of maintained liquidity.”

When issuing its conventional bonds, Germany chooses to retain some of those bonds as a way of maintaining sufficient liquidity. The finance ministry has stated that the same procedure will also apply to its green bonds. “Bunds are used extensively for collateral purposes, in the repo market for example,” says Vic-Philippe. “Probably more so than many other countries’ bonds. So in holding on to a portion of any issue means that if a certain bond is being squeezed and becoming too expensive, then the retained portion is used to provide liquidity to try to offset that trend.”

Concerns of a lack of accuracy and accountability of entities, particularly among corporates, which are raising monies with green-bond issuance have dogged the green market for years. Incidents of ‘greenwashing’ still make the headlines.

However, investors seem highly unlikely to view Germany as lagging on this front, or to be any less transparent than other EU sovereign issuers. Carefully tracking the money raised from a sovereign bond launch through to the real economy is not simple in any domain. As Vic-Philippe says: “In France, for example, budgetary expenses cannot be covered by specific fundraising. For this German issue, we feel that the framework is quite strong and with sufficient detail too.”

There are currently several voluntary standards for green bond adherence. These include the Green Bond Principles (GBP) issued by the International Capital Markets Association (ICMA) and introduced in 2014.

There is as yet no uniform green-bond standard within the EU. However, the Green Bond Standard (GBS) announced this year by the EU (closely aligned with the ICMA GBP), sets out the three necessary requirements for a green bond: green-bond framework, proceeds to green projects and external verification – that is, obtaining additional endorsement from a second party.

According to the federal ministry of finance, securities issued are always assigned to expenditures in the preceding budget year. In 2019, spending totalling over €12bn was classified as green. External verification was carried out by corporate governance provider ISS ESG.

Germany has been slower than many to come to the green-bond market. However, its care and deliberation is applauded by investors in this still new and rapidly growing market. The EU is preparing a more rigorous regulatory framework – to be accompanied by some potentially onerous ESG disclosures – for asset managers, pension funds and insurers, as part of its sustainable-finance action plan. This is set to go live in March 2021. It should increase transparency, and verification from the issuers is to be welcomed by investors.

Green bond issuance in 2020 is unlikely to match that of the previous year. Governments and supra-nationals, for example, are more focused on COVID-related programmes. However, there seems little doubt that we will see plenty more green-bond issuance from sovereign issuers in the years ahead, says Loirat. “The €750bn EU General Recovery Plan could be very important in this respect; 30% of the cash, in the form of grants or loans to be injected into the likes of Italy and Spain, is to be directed to designated green projects.”

Pictet Asset Management agrees more green bond issuance is likely. In a paper published in August it said: “The recovery fund could trigger a step-change in the availability of low-risk green bonds.” It also points to the importance of the EU’s green taxonomy legislation which, it argues, establishes the world’s first official ‘green list’ classifying environmentally sustainable economic activity.

While AGI is not expecting the green bond market to continue to double every year, as it has been doing for the last several years, it is confident the trend is still pointing upwards.

As Bras, co-manager of the Allianz Green Bond fund, says: ‘There are surely going to be more issues from more governments, which probably means larger bond sizes. With the EU’s taxonomy and GBS guidelines, increasing regulation within the sector should enable more entities to tap the green-bond market, which we hope will result in more diversification, in terms of sectors, in corporate issuance.”