Getting the big picture right always helps and sometimes it makes subsequent investment decision-making blindingly obvious. But so often there seem to be diametrically opposed eventualities, with ambiguity everywhere. The dramatic fall in the oil price, for example, is creating plenty of puzzlement.

The cheaper oil price may provide a boost to economic growth across the globe, particularly in the US, which historically tends to record bigger boosts to consumer spending when oil prices fall, and this could have hawkish implications for Fed and other central bank policy.

However, if lower commodity prices are genuinely pointing to lower global demand and if headline and core inflation levels are pushed lower, this would almost certainly trigger more central banks into easing and providing more liquidity. The possibility of quantitative easing by the ECB became more and more probable as Europe’s actual inflation and future expectations fell ever lower.

While macroeconomic uncertainties remain as confounding as ever, the world’s geopolitical risks are  heightening. With many countries under the highest terrorism alert, huge parts of Africa under threat of Boko Haram, and eastern Ukraine still  effectively a war zone, the risks of possible turmoil spilling out into ordinary lives are very high.

Politics too are a source of considerable stress for markets. Greece’s new set of politicians are refreshing in their energy and youth. However, they face formidable challenges in the weeks and months ahead. And it is unclear who welcomed ex-FedX  chairman Greenspan’s deliberations that Greece will “inevitably” exit the euro, adding that it would suit both Greece and the other EU member states.

The Swiss National Bank’s sudden ending of its minimum exchange rate target is still causing bewilderment. While most observers might not concur with some of the more extreme views expressed – for instance, that all central bank credibility has just been blown and that central banks are impotent – there is certainly a degree of suspicion about the motives behind the rather startling decision.

The sharp rise in the gold price may well be related to the SNB’s shock move. Much more of the recent rise might have more to do with the global threat of deflation, the ECB’s QE plans, and a more general rise in risk aversion as geopolitical risks move higher.

There may be some sympathy for the SNB; one official from the IMF has pointed out that “when you peg, it’s difficult to exit [from the peg] in a clean way…. they had no choice”. However, being caught completely unawares by policy change decisions does not really lend itself to an atmosphere of mutual trust.

What markets like is plenty of communication from central bankers, whether dramatic and sweeping, like we have seen from president Draghi in recent years, or more cautious and measured as from chair Yellen and her predecessors. Statements issued by central banks after, rather than before, about-turns in policy always attract a high degree of scepticism.

Is the SNB less uncomfortable with the Swiss franc’s overvaluation versus the euro because the dollar has appreciated so markedly? To some extent yes, but it was fairly likely that the franc would appreciate even more against the euro once that floor was removed. What about subsequent official comments that the rapid rise in the bank’s FX reserves was also behind the move? Perhaps this was indeed another factor: the bank was becoming more uncomfortable with the prospect of ‘printing money’, and with the potential political backlash.

It is reasonably clear the currency will appreciate further, and there will be a greater likelihood of the bank failing its inflation target.

Bonds
As well as contending with all the knowns and unknowns, bond investors still face the unenviable task of finding any value and hanging on to it when yields throughout the bond universe are already at, or very close to, that zero bound. The falling oil price, so often welcomed by bondholders and investors, has aggravated global deflationary pressures and, with that, the ongoing trend for very low and even negative interest rates in the developed world.

Although, of course, it is never really possible to apportion the individual effects of the large variety of influences on bond yields, intuitively today’s very low US Treasury yields must have been strongly influenced by falling yields in Europe, especially throughout 2014 and again this year both before and after the ECB’s QE announcements.

Adding to the unease is the awareness that US Treasury yields are now far below ‘fair’ value as indicated by plenty of bond models (many very well respected and historically reliable). The question now is how to be in the right position at the right time when economic fundamentals might once again be the strongest influence.

There is little doubt that the US economy is growing well; after some weakness early in the new year, January’s employment data were strong, with some substantial upward revisions to previous months’ figures. Falling inflation figures point to a strong possibility that the Fed will miss the inflation part of its dual mandate. However, markets are currently taking Fed chair Yellen at her word – that the oil price falls will have but a “transitory” impact which will soon dissipate – and futures are back to pricing-in the first Fed hike in June.

Currencies
Thanks primarily to the SNB’s surprise abandonment of the EUR/CHF1.20 floor, FX volatility soared in January, rather like the Swiss franc itself. However, FX volatility may stay higher for rather longer than the Swiss currency. With central banks around the world, not just the ECB and its QE, embarking on more easing, negative interest rates are being printed more and more frequently, altering investor perceptions and, within many mandates, investment options.

In fact, for the first time, German 10-year yields are now trading lower than JGB 10 years. Interestingly, the EUR/JPY rate used to trade closely to the 10-year spread, although this relationship broke down early in 2012. Now that the bond spread is actually negative, this could put more pressure on the EUR/JPY as investors question the value of owning euros versus yen.

Unlike many other central banks, the Central Bank of Russia is contending with rapidly rising inflation, expected to peak at around 20% by mid-year, led by surging food price inflation. The value of the rouble has plunged over the past few months, a fall that the central bank initially tried to stop, but then changed course, saying it would be willing to tolerate much higher inflation and a significantly weaker currency in order to support the failing economy.

It’s not just the Russian currency that has been badly hit by the tension and violence in eastern Ukraine. The Ukrainian hryvnia went into virtual free-fall in the new year as the turmoil has escalated.

The Russian economy has been further damaged by sanctions, as well as the collapsing oil price. Consequently, the outlook for much of the rest of the Commonwealth of Independent States’ economies, so reliant upon Russia’s economy, has worsened dramatically. 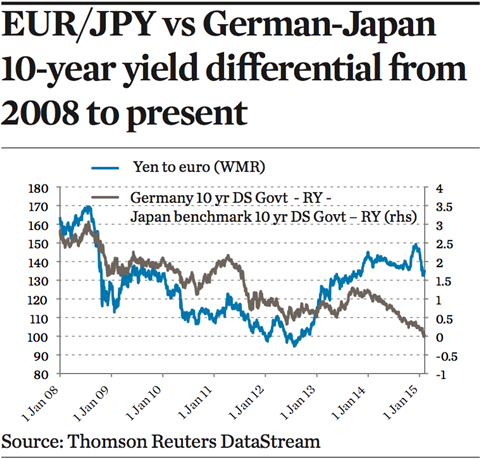