Investors have not been paying enough attention to physical climate risks, as opposed to the risks posed by steps to combat climate change, according to Schroders.

With temperature rises lagging increases in greenhouse gas concentrations in the atmosphere by around 40 years, further disruption from the effects of changing weather patterns looked unavoidable, the asset manager said in a new report.

This meant bigger risks to physical assets and infrastructure.

With the exception of the energy sector, companies generally showed an appreciation of the risks posed by the disruptive impacts of physical climate change, wrote authors Andy Howard and Marc Hassler.

Investors, however, had paid limited attention to physical climate risks, which seemed “remiss”, it said.

More attention had been paid to the impacts of steps to limit temperature rises – typically referred to as “transition risks” – but these risks “rely on action to combat climate change that is far from assured”, argued the asset manager.

Its latest climate change tracking analysis found that the pace of global warming was still double the target under the Paris Agreement because global action to limit its impact was still too slow.

Howard, Schroders’ head of sustainable research, said that the order of magnitude was smaller with physical climate risks than in the case of transition risks, “but on the other hand we do know this is happening, we know it’s already playing out in front of us”.

“When we talk about the risk of carbon pricing hitting $100 a tonne, that’s a risk we can’t yet say is going to happen,” he said. “We can say that it will need to happen or that it should happen, but the reality is that you can’t assume it’s baked in and a definite outcome.”

Based on an analysis of around 11,000 listed companies across the world, Schroders found that 1-1.5% of value was exposed to physical climate risks across equity markets. 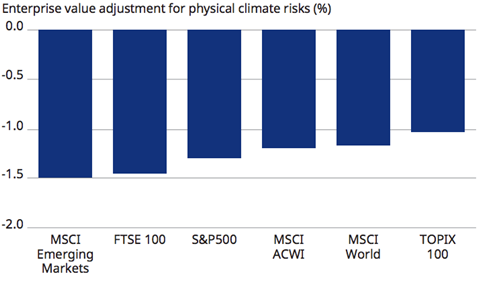 Source: MSCI, Schroders. Based on most recent data available in March 2018

This aggregate figure masked a range of risk exposures, said Howard, with some companies having more than 10% of value at risk and others not exposed to physical climate risk at all.

The oil and gas, utilities and basic resources sectors were the most exposed to the physical impact of climate change, while technology, personal and household goods, and healthcare were the least exposed sectors.

The asset manager came up with the figures by calculating what companies would have to pay to insure their physical assets against hazards caused by rising global temperatures and weather disruption. This implied cost was then compared with companies’ market values.

“By putting a price on the cost of ‘neutralising’ climate damage we create an objective assessment of the impact on corporate valuations,” said Howard and Hassler in their report.

It was unaware of any companies that had taken out multi-decade climate insurance, but defended its approach as “a robust way to gauge physical risk exposures, and… commonly used to answer other investment questions”.

Schroders is not the first asset manager to warn about overlooking physical climate risks.

Nicolas Moreau, CEO of DWS – formerly known as Deutsche Asset Management – has argued that investors should pay more attention to physical climate risks “with some urgency”. The asset manager has teamed up with a California-based climate intelligence advisory firm to assess companies’ exposure to catastrophic climate events.