A pan-European research initiative has been launched to allow European institutional asset owners to share intelligence about asset allocation activity and their future investment intentions.

Project Louvre, as the project has been dubbed, aims to gather information about the asset allocations of institutional investors – pension funds, insurers and sovereign wealth funds – in different European countries via the professional associations of which they are members.

Participating associations will submit combined data on their members’ current and expected future asset allocation on an annualised basis within a standardised format.

The initiative is being co-ordinated by Af2i, the French institutional investor association, and Insticube, a data platform for asset owners.

Presenting the initiative in Copenhagen at IPE’s annual conference today, Jean-François Boulier, president of Af2i and chair of the project, said the sharing of knowledge about investors’ asset allocation offered many opportunties for the investors, their providers, and regulators.

Institutional asset owners, for example, would be able to benchmark their own asset allocations against their European peers. Boulier noted stark differences between asset owners in different countries, highlighting that in France the average allocation to real estate among institutional investors was 6%, while in Switzerland it was above 20%. 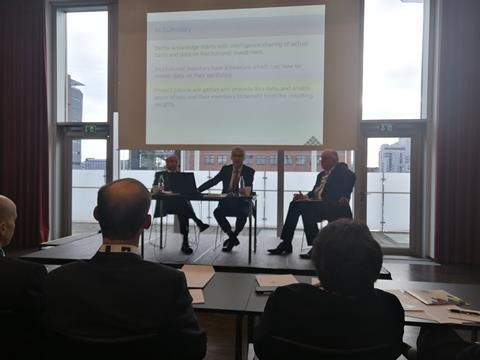 “We feel it’s interesting for institutional investors to be able to compare their own bets, beliefs, and asset allocations with others,” said Boulier.

Boulier said around 10 member associations had so far agreed to participate in the initiative.

Tim Brown, head of key relationships at Insticube, said: “The key thing is that these are facts. There is a lot of discussion about asset allocation, a lot of data produced but this is absolutely raw data coming from the organisations that represent institutional investors in each country and combined together to provide meaningful benchmarks.”

Responding to a question about the granularity of the data, Boulier said the plan was to distinguish between different types of institutional investors but indicated the possibility of country-level breakdowns.

“But if one wants to compare against peers in other countries you need to use larger buckets,” he said. ”Of course you’ll have to have in mind that there are differences, certainly between public and private, between life insurance and casualty insurance.”

The delegate asking the question had pointed out that in Germany, there are five different routes for occupational pension provision and they are each regulated very differently, which results in different asset allocations.

Insticube’s Brown said it was important to be pragmatic.

“The main objective at the beginning was to start with tempates that everyone could actually provide the data for, otherwise the great danger is we have a talking shop that goes on for years and we never actually deliver anything.

“The beauty is that everyone already has this data and it’s coming from the organisation representing the investors. Properlly controlled it will give people a real benchmark.”