It would be an understatement to say the shine has left the US equity market, given this month’s manager expectation submissions. The month’s responses indicate movements across all asset categories, with a positive nod toward Europe, while those who predict change (for instance in the US and the UK) are seeing an erosion of confidence towards equity valuations. 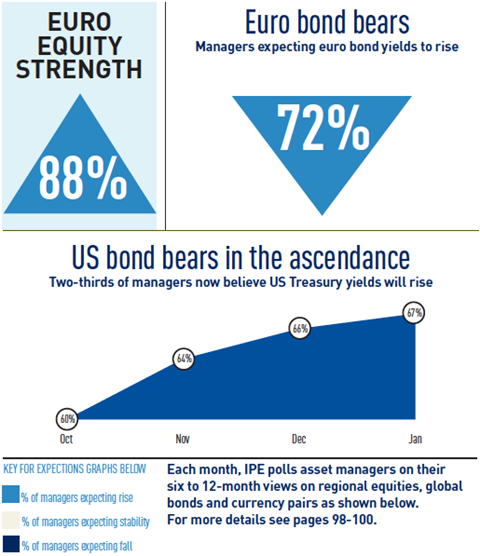 After rising from near two-year lows early in 2017, the differential between those predicting a rise versus a fall of dollar bond prices has not shifted. However, the same measure for euro bond prices has resumed its downward trajectory. Only in the UK is there an expectation for prices trending toward the positive. Generally, bond prices are not expected to rise, but for dollar and euro bonds, these are more negative.

The clearest beliefs this month are in equity markets. Expectations for rising US equities fell by the largest amount in nearly two years. The shift was the largest change since after the US presidential election. However, it appears most believe a continuation of these gains is unlikely. Sentiment is very different for euro-zone equities, as the positive increase in sentiment has paused. For the third month in a row, fewer than 5% of responding managers expect euro-zone equities to fall. The positive tilt appears to be heading towards a two-and-a-half year high last seen in 2016. 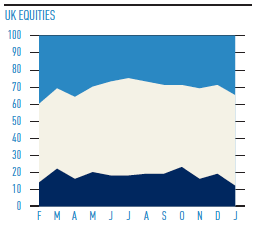 Belief in dollar strength continued to fade for a sixth consecutive month, reaching the two-and-a-half-year low set in July 2016. The dollar is expected to be weakest against the euro. While sentiment toward dollar strength is weakening, it is important to remember it is weakening from a strong position. Compared with the yen and pound, a dollar rise is still the majority belief. 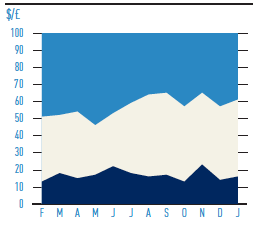