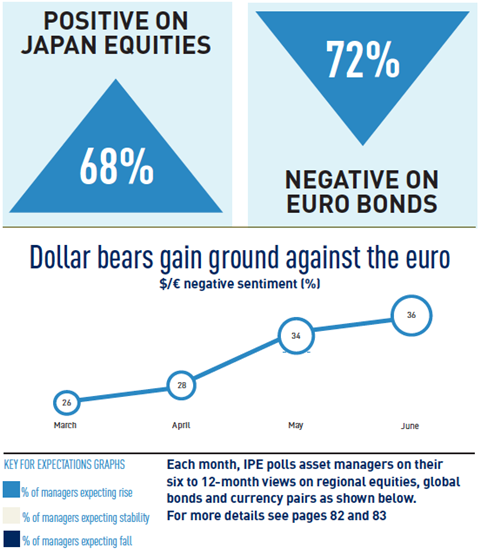 This month’s IPE Expectations Indicator poll sees no change in some areas, some change in others, and a continuation of a long-term trend, which is, in itself, both a change and not a change.

The shifts in expectation for bonds across all denominations were mostly positive. For each of the four currencies there was a fall in negative sentiment, and in all other than yen bonds there was even an increase in positive sentiment. But this positive shift could come from a lower base, as fewer than 10% of managers expect euro, sterling or yen bond prices to rise, and only 13% expect US bond prices to rise.

Currency expectations are getting really interesting. Last month, we noted that cumulative expectations for dollar strength relative to the euro, yen and sterling have not been lower in recent years. Now expectations are even lower. And we also noted last month that cumulative expectations for the dollar to fall were just below the highest observed recently (rather than shifting to stability). In this month’s survey, the level is at an extreme, having now moved to the highest in recent years. What is most interesting is that while expectations have shifted to these pessimistic-toward-the-dollar extremes, the dollar has been on quite a run in recent weeks. It is reminiscent of May 2016, when expectations for US equities to rise hit the lowest level we’d seen. All the S&P 500 did from there was to rise by more than 30%.