Central bankers were seen as all-powerful, all-knowing and all-guiding. The financial crisis has tarnished this reputation

After the period of high inflation during the 1970s and early 1980s, the cult of the central banker took hold as monetarist theories became dominant. This was thanks to the success of Paul Volcker and his ilk in banishing runaway prices into the realms of distant memory. Top central bankers ushered in the great moderation of the subsequent three decades.

Central banks acquired a rock star mystique over that period. Stellar economic growth and the knowledge that every financial crisis can be contained with swift and decisive action ushered in a golden age of monetary omniscience. Societies and markets acquiesced to the belief that these shamans could map out the economic future, targeting low and stable inflation as well as long-term growth.

The central banker came to be seen as all-powerful, all-knowing, all-guiding. But in recent years, the gilding has tarnished. The first signs of doubt over the efficacy of central banks have crept in. And the evidence that their age may be passing is mounting.

Over 2019, the economic picture has shifted for the worse. GDP growth rates have fallen, with the US losing momentum, the UK faltering amidst Brexit and Germany flirting with an industrial recession. Economic data indicates rising fragility while trade tensions have not helped either, as trade growth stagnates.

The result has been that talk of quantitative tightening at the outset of 2019 has turned to discussions of further easing as the year has progressed. Central banks have found themselves called once more to provide monetary support for their economies.

But much has changed since the last financial crisis. The room for manoeuvre is limited. The US Federal Reserve is starting from a low peak. Europe is already in negative territory and can only go lower. Others are similarly constrained by the zero bound, kneecapping orthodox options. 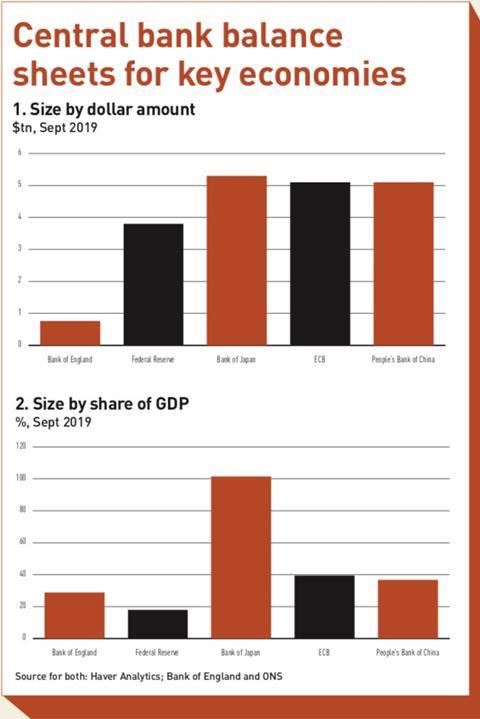 Alongside, balance sheets have grown enormously – somewhere between three and six times their size before the last financial crisis for most central banks, representing a significant proportion of GDP (see figure).

Given today’s outlook, the likely trend is a further increase. Most recently in September, the Fed pumped over $200bn (€180bn) into the repo market, as an unexpected liquidity crunch caused rates to soar from about 2.25% to over 5% and in some cases, close to double digits. Though not termed quantitative easing, the scheduled purchase of securities and significant balance sheet support makes this different in name only and points to another period of expansion.

But the appetite for manoeuvre is also limited. From yesterday’s heroes, central banks are now today’s villains. Worries over asset price inflation, the effects on inequality and the perpetuation of zombie firms have all been laid at their door, limiting the capacity for further monetary shock and awe, particularly as populism rises.

From President Trump’s regular attacks on Jerome Powell, the chair of the Fed, to the bending of central banks in emerging markets to the will of authoritarian leaders, central banks are on the defensive. The irony is that they are often also castigated for not doing enough to support governments on the monetary front.  It is a lose-lose scenario.

On the one hand, any hope of normalisation and rebuilding reserves for future downturns generates responses that are too halting and measured to satisfy in today’s charged environment.

At the same time, any significant easing reopens old criticisms, particularly that central banks are far too focused on financial stability to the detriment of social equity. It also raises the risk of a slippery slope of dwindling options and further attacks on their independence, with limited control till after politicians have had their say.

That, however, is merely the hand-wringing of execution. There is a deeper issue of control.

In today’s tribal politics, central bankers are sidelined. The currents moving economies and markets are outside their control. The Fed can do or plan little without a clear resolution to the trade tensions hanging over the US economy. The Bank of England cannot plan policy or support more than weeks out at a time in the absence of clarity on the if, when and how of Brexit.

Their arsenal is also losing its effectiveness. Today over $15trn of global bonds are negative-yielding. 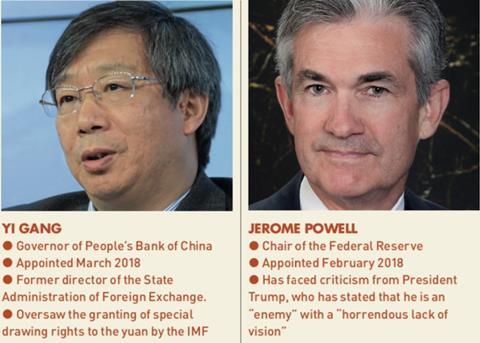 Thanks to this sustained low-yield environment, investors have looked elsewhere for returns. Public markets have boomed, but the private markets have also seen a meteoric rise across private equity, private debt, infrastructure, real estate and other areas.

Although welcome, this innovation also has consequences. In swaddling the global economy to preserve market stability, central banks have also neutered their most powerful tools. 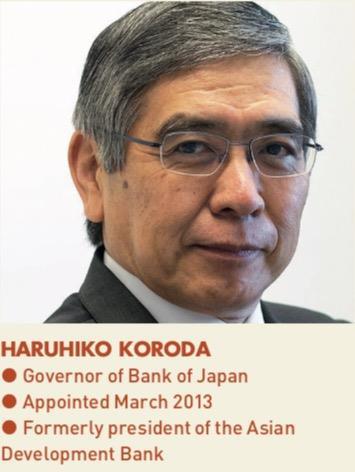 Central banks do not control the yield curve, contrary to popular assumption. They merely influence it, either by buying assets or more often, by setting the overnight policy rate. That latter rate then propagates through the economy as banks reflect it in everything else they do – mortgages, loans, wholesale funding and so on – thereby ensuring that a central bank’s decision soon reverberates.

However, as banks shrink their balance sheets, there are growing gaps in the economic firmament. Key nodes in the financial network weaken or vanish, leaving voids that private markets are seeking to fill.

But, these new asset classes are less sensitive to the edicts of central banks. Direct lending to corporates, for example, often includes floors on interest rates to prevent the rate dropping to uneconomic levels. Real asset investments have deflation protection and inflation linkages built in to mitigate the worst monetary excesses. All of these reflect the economic returns demanded by institutional investors – returns set not by a base rate but by the quantum needed to fill pension deficits, deliver shareholder returns and so on.

These are the new base rates for the shadow banking system that is driving a growing portion of the global economy. Central banks now control a shrinking proportion, with their influence and the efficacy of future policy ebbing daily. 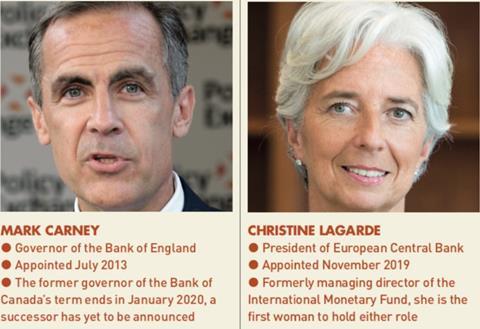 In this environment, a new paradigm beckons. As central banks become less able to support economies and influence markets, the next move is towards fiscal activism to boost growth. Mario Draghi indicated as much in his explicit plea for fiscal easing as he handed over the reins of the ECB to Christine Lagarde in October.

Signs of increased fiscal activism are apparent with talk of significant investment into infrastructure, the Green New Deal in the US, the Belt and Roads Initiative by China, broadband for all and so on. But more is likely to come, given the interest in modern monetary theory and the direct financing of governments by central banks.

The next bailout is likely to be to society at large – a quantitative easing for the masses.

That will be state-driven, and in that scenario, the future role and influence of the central bank looks set to be further diminished. Omniscience has found its bounds and the rock star central banker will no longer know what lies beyond.

Bob Swarup is principal at Camdor Global Advisors, a macroeconomic investment and risk advisory firm. He can be contacted on swarup@camdorglobal.com