As 2019 dawns, investors find themselves fretting about the calendar of uncertainty in the year ahead. Brexit, Italian budgets, trade wars, hastily organised summits and so on. Political volatility means the world is set to remain  on edge – fretting about economic uncertainty while struggling to understand where exactly this will be reflected in investment portfolios.

There will be many effects but the most important to watch out for and guard against in the coming year is currency and the associated volatility.

The choice may seem mundane in a year that promises so much more in terms of headlines but the truth is that in 2019 currency looks set to become a key mover of policy and economies as well as a growing influence on investor decisions.

But much more importantly, post-Brexit the UK as an economy will be far more vulnerable to exchange rate risk and its economic path much more influenced by the whims of foreign capital. That is a direct consequence of an internationally focused economy no longer tethered to the stabilising influence of the euro-zone, and one with a stated intent of internationalising even further.

The need to focus on trade – whether with the EU or with others – and attract foreign investment necessitates greater currency volatility for the UK, given the heady mix of a large financial sector, a free-floating exchange rate and mobile capital. At the same time, that volatility will have consequences for exporters and also lead to volatility in input inflation for consumers. Given the Bank of England’s cautious attitude to rate rises, the likelihood is of sustained negative real returns for investors and policy concerns over a  populace  looking for a tangible sense of improvement in their daily lot.

The UK, however, is but one example. More widely, global growth has continued to disappoint for many, with the US being a lone beacon in recent times. That has created new tensions that are finding an expression in currency markets.

In October my column discussed the growing problems with the dollar as a reserve currency, particularly for emerging markets which have suffered in a world of quantitative tightening thanks to their own economic weaknesses and the reliance on dollar-denominated debt. As the US Federal Reserve has raised rates, this has translated internationally into large changes in capital flows, real exchange rates and inflation in these countries.

At the same time, two parallel developments are worth noting: first, the emerging trade tensions between the US and China (and between the US and other countries); and second, the risk of overtly authoritarian populist regimes globally.

The result of the first has been to weaken the renminbi as China seeks to mitigate the impact of the trade tensions on its economy and cushion the effects of internal fragilities, particularly on the debt side. The impact of the second has been to create a political emphasis for many countries to mitigate their exposure to externally-driven volatility and boost short-term economic growth in an effort to placate key supporters and short-circuit potential discontent.

Both are set to sow division and raise trade tensions, not manage them. Any depreciation in the renminbi will feed directly into the US narrative of China as a currency manipulator and exacerbate the gap with a still-strengthening dollar. 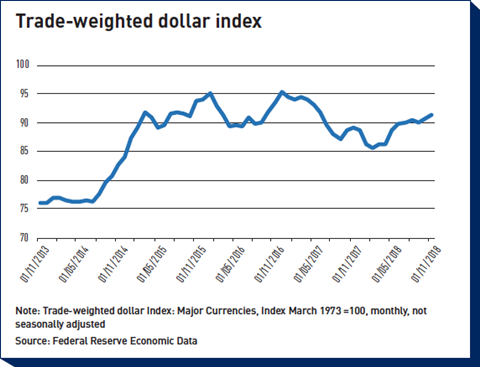 For others, such as Turkey, the reaction has been to suppress any rise in rates and examine ways of increasing  competitiveness. In the short term that will come through as a rising money supply and a further depreciating currency that aids exporters as the proxy for future growth.

Unfortunately, many countries have impaired balance sheets. Any growth from stimulus will come at the expense of trading partners. The risk is that they will  devalue in turn to regain competitiveness.

That can rapidly turn into a game of competitive devaluation, and protectionism by a different name. Every country wants a cheaper currency as it seeks to export its way back to growth. In a world of reduced growth and political brinkmanship, the result could be a frenzied race of currencies to the bottom and an increasingly partisan flavour to nations’ rhetoric and actions.

Even the US is not immune, with President Trump increasingly vocal about his dissatisfaction with the Fed’s tightening bent of mind. The rising dollar is also creating fiscal pressures, as repayments of existing debt are expected to become the fastest-rising expenditure for the US Treasury, growing by 24% in 2018.

The decoupling of the US from other economies is creating headaches for investors, as the cost of hedging rises and erodes their returns overseas. The reason is simple: hedging costs are driven by the interest rate differential between the two currencies in question and the foreign exchange/currency basis, namely what investors pay to buy and sell currencies forward.

Both have risen when it comes to dollar currency pairs. Where the Fed is tightening, the European Central Bank and Bank of Japan are demurring and holding low, while the Bank of England is tentatively stepping out. That means a growing interest-rate differential in recent years that will only increase further in 2019.

The net result is a strong headwind that has made it increasingly difficult to achieve good returns. The challenge, however, for many investors is that withdrawal from the market is not an easy option. Pension funds are large international pools of capital and need to invest across multiple jurisdictions to access capacity and diversify away their risk. To make matters worse, the US is the largest market and it is perceived to be enjoying a modicum of growth.

As costs rise, asset allocation and portfolio construction will  come under added pressure to compensate and deliver the ambitious returns most pension funds still need to meet their liabilities. Finding new niches with capacity and thinking of how to turn these trends to the portfolio’s advantage will become an overriding focus.

In 2019 it is likely that everyone – not just tourists – will begin to think much harder about currency.