Market volatility and fluctuating asset values are “irrelevant” and should be ignored in favour of an approach based around the monitoring of cash flows, Sally Bridgeland of the UK’s BP Pension Scheme has said.

The chief executive of the £16.6bn (€19.9bn) fund also told attendees at the IPE Awards Seminar in Noordwijk that pension funds were unlikely to be prepared for the operational challenges coming their way in a post-Lehman Brothers world.

Five years after the financial institution’s collapse, Bridgeland was interviewed by Amin Rajan, chief executive of CREATE-Research, on how the demise of the investment bank had changed approaches to investment.

“For me, the interesting thing is that, 10 years ago, nobody used the word ‘risk’,” Bridgeland said.

She also expressed surprise at a poll of attendees that found 58% knew their pension fund to be cash-flow positive.

Only 6% of attendees said they did not know into which category their scheme fell.

Bridgeland said the focus on risk and the fact pension fund employees knew their fund was cash-flow positive “[signalled] the fact we are moving into a different era”. 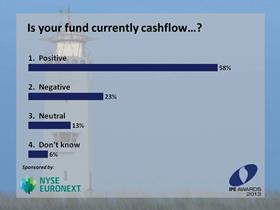 Delegates were polled on if they knew the cashflows of their pension funds.

The former consultant called on pension funds to start thinking like businesses, explaining how it was at first hard for her trustee board to understand why actuaries were attempting to assess the value of cash flows from the fund’s holdings.

“Really, that is the common sense – you apply that business thinking to the problem.

Bridgeland said it was important to change the mindset of all involved in monitoring asset performance, and that she wanted to compare the performance of a long-lease property with that of infrastructure debt, without having to place the assets into different categories.

“You want to get the best price for the cash flows, and you want to assess risk based on the characteristics of those cash flows,” she said.

Bridgeland said that, when she first joined the BP scheme, it resembled a balanced fund in its investment approach, but that she had implemented a number of strategy changes since 2007 and knew exactly where she wanted the plan to be in 2023 – even if the path towards achieving her goals was an unpredictable one. 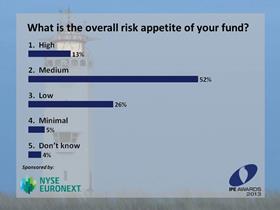 Delegates were also asked during Bridgeland’s panel about their overall risk appetite.

“I’m not sure the asset management industry, the consulting industry and even individual pension funds have the operational flexibility they need to do that kind of journey – that’s what reality is going to throw at us,” she said.

Weighing in on an earlier debate about smart beta – one that saw the strategies branded “old wine in new bottles” – the chief executive said the challenges over ever-changing strategies facing the pensions industry was a different one.

“It’s symptomatic of not old wine in new bottles but middle-aged people on Harley-Davidsons,” she said. “It’s a bit of a mid-life crisis, where everyone is trying to grapple with what we’ve got to try, and make sense of the journey ahead.”

Bridgeland predicted that, rather than wine, pension funds in future would want cocktails of asset allocation.