The Dutch residential market offers good opportunities in fixed income, but foreign investors should do their research

While it is getting harder to find good opportunities in the fixed income arena, the €650bn (£579bn) Dutch residential market is still generating relatively attractive returns with a low correlation to other assets. This is particularly true of direct loans, but it is important for those outside the country to understand the idiosyncrasies that underpin the sector.

One of the biggest differences, which tends to make investors jittery, is the high loan to values (LTV) that are prevalent because the Dutch tax system allows for full deductibility of mortgage interest payments from taxable income. LTV ratios have come down from the eye-watering levels of 120% after the government introduced phased-in caps in 2011 as part of a mortgage legislative overhaul. This was to encourage home buyers to put more money down in the deposit but LTVs are still hovering at lofty levels of 100%.

However, Dutch households have a good track record in paying off their debts and a report by credit rating agency Fitch last year ranks default probability among the lowest in Europe. “The historically low level of losses in the Netherlands – even during and after the crisis in recent years – should provide comfort that this market is robust, with high payment morale among borrowers and a strong legal and regulatory framework to fall back on,” says Petra Stassen, client portfolio manager, alternative credit, at NN Investment Partners. “Underwriting standards have become stricter in recent years, further improving the credit quality of the loans.”

Research from AXA Investment shows that although interest rates are higher in the Netherlands at around 2.5%-3%, arrears were just 0.2% last year. This compares to Germany where rates were around 2% and arrears at 0.3% and France which showed 1.5-2% and 1.5%, respectively.

One reason is that the debt-service to income ratio is relatively low at around 20%, compared to around 30% in most European countries and more than 50% in the US, according to Aegon Asset Management. Equally as important is that unlike in other markets, Dutch homeowners cannot simply hand back the keys and walk away if they cannot keep up the repayments or pay in full as they did in the US during the subprime crisis. There is full recourse to the lender.

Frank Meijer, head of the European ABS and mortgages team at Aegon Asset Management, says: “Borrowers do not have to pay anything up front, though the average down payment is still 15-20%.” He adds: “New borrowers do have to pay the mortgage back in full in 30 years and if they don’t, the lender can chase them until the end of their life,”

According to Meijer, lenders can repossess and sell properties privately or by public auction without a court order. Another aspect specific to the Netherlands is the Nationale Hypotheek Garantie (NHG), a government mortgage guarantee that covers about 30% of the market and pays back 90% of the losses on the loan. 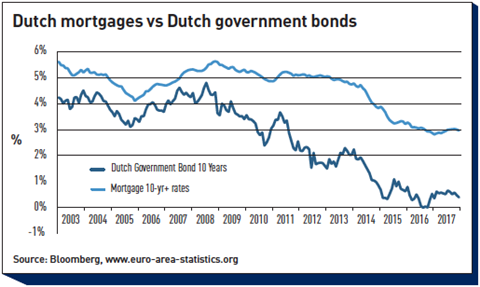 As for the non-NHG part of the market, Stassen believes that investors should “realise that originating and servicing these types of loans requires specific skills that should be part of the originator’s DNA. Looking back at the crisis in recent years, this proved the importance of having built up a strong track record of maintaining low loss levels on these non-NHG loans.”

Whichever mortgage is offered, the market has to abide by a code of conduct designed to mitigate the risks in the system. Written by the Dutch Banking Association and the Dutch Association of Insurers and enshrined into law in 2013, the code sets, for example, the maximum LTV and debt-to-income ratio. In this way, lenders only compete on the basis of mortgage rates and client service.

“I think one of the most important features of the Dutch market is that it is highly standardised and there is not that a huge difference between one lender and another,” says Hubert Vannier, head of secured assets at Amundi Asset Management. “We consider the greater maturity of the market and the stricter code of conduct both led to a higher similarity between loans.

“This standardisation and the common use of independent mortgage brokers allowed new lenders to enter into the market such as Venn Partners and Dynamic Credit.”

He adds that the more uniform loans and servicing automation allowed economies of scale and pushed traditional servicers to transform in-house support departments into more independent structures in an open-market model. “It is now easier to find a back-up servicer if necessary,” he adds.

Christophe Fritsch, co-head of securitised and structured assets and head of structuring in the structured finance division at AXA Investment Managers, also believes that the code has laid the foundation for strong performance in the future. He points, for example to redemption types progressively turning from a legacy of interest-only to amortising – 65% of new originations are now in this category, and prime borrowers are not allowed to take interest-only loan elements for tax deductibility. Moreover, affordability calculations are based on an annuity loan for all applications, even for interest-only loans.

Although all these factors have contributed to the Netherlands being one of the strongest credit markets in Europe on a risk adjusted basis, the big question is whether now is the right time to invest for non-Dutch investors. Fritsch says: “In our opinion, the answer is yes, as there is currently a supportive Dutch economy and housing market.” He points to falling unemployment which was 4.4.% at the end of December 2017, compared to 8.7% for the euro-zone, as well as rising house prices on the back of persistent low interest rates, strong market confidence and a housing shortage.

In terms of the types of investment, loans seem to be trumping bonds. “Dutch RMBS is a well-performing, robust market but for now, spreads have gotten tighter and we see it as more of a cash alternative play because of the liquidity,” says Jeremy Deacon, senior portfolio manager at Insight Investments.

“Also, transactions have been limited to just a few issuers so there are limited buying opportunities.”

Dutch residential mortgage Loans are seen as the most attractive alternative to traditional fixed income investments, as they offer a pick-up in yield and increase the level of diversification, according to Stassen. Investors with a long-term buy-and-maintain approach can also benefit from the illiquidity premium as they often do not need to hold 100% liquid assets in their portfolio.

As for performance, Meijer says its fund, which at the end of December had €12.02bn assets under management, generated a yield of euro mid-swaps plus 170 basis points. “They also make a nice asset liability management hedge for pension funds and insurance because they are long duration matching with long fixed periods of 20 to 30 years,” he adds. “There is also a Solvency II angle because there is a lower capital charge for residential mortgages.”

In addition, Fritsch notes that Dutch loans perform well against other alternative investments with around 10-year weighted average life. AXA research shows that, Dutch government bonds only eke out a mere 0.7% during that time while infrastructure debt generates 2% to 3% and AA-rated corporate bond with a 10 years maturity come in at below 1%.