Analysis: EC gets to issuer side of sustainable finance measures

The European Commission on Wednesday delivered a package of measures that stand to make a coherent whole of its plan to harness financial markets for the fight against climate change, although questions remain about certain environmental classification decisions.

The package includes a proposal for new corporate sustainability reporting legislation, which would replace the Non-Financial Reporting Directive (NFRD), and the “EU taxonomy climate delegated act”, which sets out the criteria determining which economic activities can be said to be green in terms of their contribution to climate change mitigation and adaptation.

The Commission also published a set of rules that require financial firms, such as advisers and asset managers, to include sustainability in their procedures and investment advice to clients.

EFRAG would have responsibility for developing the draft standards, which would cover the risks to companies from environmental and social matters but also companies’ impact on society and the environment – the so-called double materiality perspective.

Efama, the European asset management lobby group, and BVI, its German counterpart, both gave their approval of the CSRD proposal and urged for its swift adoption.

“It is good to see that the EU Commission wants to oblige significantly more companies than before to publish standardised sustainability data,” said Thomas Richter, BVI’s CEO.

“This would fulfil an important requirement by making available the comparable information that institutional investors need to assess the sustainability of target companies.”

More technically, implementation of the CSRD would also deliver the information asset managers and other investors need to comply with disclosure requirements imposed on them as part of the Commission’s sustainable finance action plan.

“In the context of the EU Green Deal and Recovery Plan, we see the proposed CSR Directive as a key enabler for taxonomy-aligned sustainable investments and look forward to the first disclosures becoming available on 1 January 2024.”

“Financial markets need to be able to analyse what is sustainable or not, and the taxonomy will provide the language in which this information is passed along the chain”

Speaking at IPE’s ESG Forum yesterday, Sven Gentner, head of unit for asset management in the Commission’s financial services division, said the flow of information along the investment chain was key to the Commission’s goal of “activating” the financial sector to help with delivering on the EU’s climate change goals.

“The CSRD sets the reporting rules for companies in the real world, and based on this information entities subject to the SFDR will process this information and pass it on to advisers and investors,” Gentner said.

“Financial markets need to be able to analyse what is sustainable or not, and the taxonomy will provide the language in which this information is passed along the chain.”

At PensionsEurope, CEO Matti Leppälä said the new measures presented by the Commission aimed to improve the data that needs to be provided to investors such as pension funds, and that “we can support this regulatory development”.

“The proposed CSRD includes mandatory audit of the information provided and mandatory digital reporting in [European Single Electronic Format] with corresponding labelling of sustainability information using a taxonomy yet to be developed,” he said.

“So, many steps still need to be taken, but already now we can see that the EC sustainable finance action plan has become a game-changer for all active in the financial markets.”

A group of NGOs including Frank Bold and ShareAction made many positive comments about the CSRD proposal, but expressed regret about aspects such as it not covering all companies from high-risk sectors. The Commission has said that non-listed SMEs could voluntarily use the standards to be developed for SMEs.

The taxonomy rules published this week did not come easily for the Commission, with intense lobbying taking place over the criteria regarding certain economic activities, such as those related to natural gas and forestry. 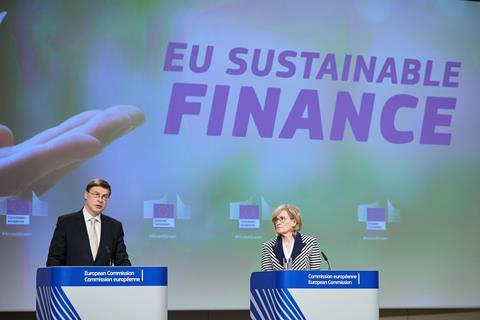 A leaked version of the then draft text a few weeks ago prompted nine of the Commission’s sustainable finance advisers to threaten to quit, with the chair of the Platform on Sustainable Finance and heads of its sub-groups following up with an expression of their own concerns a short while after.

Speaking at a press conference yesterday, Commission executive vice-president Valdis Dombrovksis said that he had never seen such a wide range of opposing views and approaches as on the taxonomy criteria.

“They came from the many thousands of contributions we received from businesses, scientists, experts and civil society – not to mention different views that we heard from Member States and Members of the European Parliament, of all political persuasions,” he said.

“We had to bridge those differences. Now, I believe that we have produced a balanced and ambitious proposal that will be a template for Europe’s green future.”

The solution reached by the Commission effectively involved delaying a decision on natural gas, together with nuclear, with neither included in the draft delegated act presented this week.

According to the Commission, the criteria in the text would cover the economic activities of roughly 40% of listed companies, in sectors which are responsible for almost 80% of direct greenhouse gas emissions in Europe.

On gas the Commission has indicated it planned to adopt rules later this year to cover natural gas and related technologies as transitional activities “in as far as they fall within the limits of the EU taxonomy regulation”.

It has also said it would consider separate legislation covering gas activities that contribute to reducing greenhouse gas emissions but cannot be covered within the EU taxonomy as they do not meet the screening criteria.

According to Tsvetelina Kuzmanova, policy advisor at climate think tank E3G, the delegated act presented by the Commission was by no means perfect, but on gas “Europe has made a decision which it can be proud of”.

However, her colleague Claire Godet said that criteria for problematic sectors such as forestry and bioenergy had not been addressed, and some even watered down.

Environmental groups Greenpeace and WWF are calling for the European Parliament and member states in the Council to reject the Commission’s taxonomy delegated act.