AP1 has gone public with its seeding and development of a new impact investment fund in order to highlight a new stage in its climate strategy – from fossil-fuel divestment to targeting net-zero emissions – with an example of what it is now doing within corporate debt.

One of the four larger buffer funds behind Sweden’s state pension, AP1 was revealed in an announcement from Federated Hermes this morning to have invested in the manager’s new Climate Change High Yield Credit Fund.

Federated Hermes said the UCITS fund had been designed in partnership with AP1, and aimed to “generate long-term, risk-adjusted outperformance by investing in attractive high-yield credit instruments and deliver positive impact that supports a low-carbon future”.

AP1 declined to say how much money it had invested in the new fixed income fund.

Tina Rönnholm, portfolio manager responsible for external high-yield investments at AP1, said: “We are pleased to help bring the Climate Change Fund to the market, a fund we have worked intensely on with the Federated Hermes credit team for the past year.

“Having divested from fossil fuels throughout our portfolio last year, our ambition now and going forward is to contribute to getting absolute emissions down significantly in the real economy,” she said.

She said that providing financing to facilitate a much-needed transition across sectors was an example of what AP1 could do to meet the net-zero target the fund was determined to achieve.

“We recognise the need for collaborative action and financing and by helping launch this fund vehicle, we hope fellow investors will join us in driving change,”  Rönnholm said.

Federated Hermes said the active investment process behind the fund would include using its proprietary framework – the climate change impact score – to reflect the progress and impact towards decarbonisation that holdings were making.

The fund would not include the debt of companies where engagement on climate change transition had failed, the manager said in the launch announcement, adding that it would also exclude controversial sectors and heavy greenhouse gas-emitting issuers that had no desire to change. 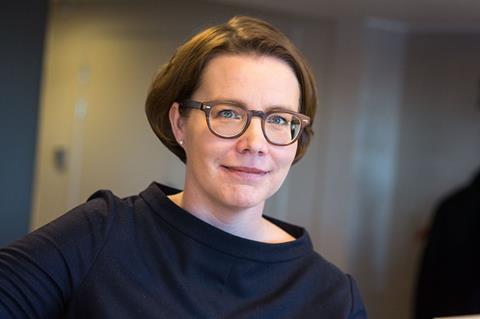 “We recognise the need for collaborative action and financing and by helping launch this fund vehicle, we hope fellow investors will join us in driving change”

Fraser Lundie, head of credit at the international business of Federated Hermes, and lead manager of the new fund, said: “We have always admired AP1 for setting a high bar when it comes to delivering long-term sustainable returns for its retirees and we are delighted that our pioneering and innovative approach to credit investing has enabled us to join forces one again.”

“We publicly released three different examples last year – one example about how to go fossil fuel free in an active strategy, one for a passive strategy and one for a systematic strategy,” she said.

“We wanted to showcase that it is possible to go fossil fuel free irrespective of investment style,” Rönnholm said.

As well as marking the pension fund’s next step – moving from fossil-free towards net zero – she said AP1 released today’s news about this example of what the pension fund is doing within credit, because it was important to communicate that debt investors had a say as well as equity investors, and an obligation.

“The requirements we have on the operations we invest in apply for the entire capital structure,” Rönnholm said.

In March 2020, AP1 adopted the policy of excluding all fossil fuels, becoming the first Swedish pension fund to do so.