European pension heavyweights PFA, Danica Pension and APG have invested in a $1.6bn (€1.4bn) financing package for Swedish lithium-ion battery maker Northvolt as part of a consortium of global investors including banks and public financial institutions.

Danica Pension, the pensions subsidiary of Danske Bank, disclosed it had invested approximately DKK837m (€112.5m), and a spokesman for PFA told IPE the commercial mutual pension fund had invested the same amount.

The financing takes the form of a subordinated loan and is to support Northvolt’s development of two lithium ion battery giga-factories and investments in research and development, industrialisation and recycling, according to the Swedish firm.

Northvolt’s batteries are a key component of electric vehicles.

Peter Tind Larsen, head of alternative investments at PFA, said: “We believe that electric vehicles will play a major role for many years in terms of reducing CO2 emissions from the transport sector.”

Northvolt said it is aiming for 50% of raw materials to be derived from recycled batteries. 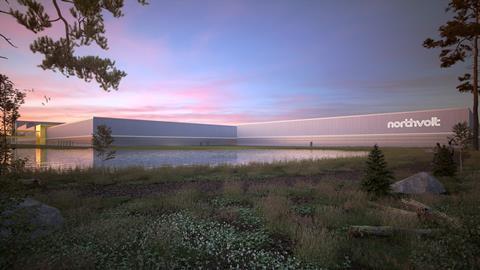 An artist’s impression of a Northvolt factory

Ole Krogh Petersen, chief executive at Danica Pension, said he expected the investment to provide strong returns, while contributing to the green transition.

“With their batteries for electric cars, Northvolt will play a major role in the transition of the transport sector from fossil fuels to sustainable forms of energy,” he said.

A spokesman for APG said the firm had decided to invest in the Northvolt debt raising because it expected to make a good return. The loan also fit well with the aim of its client, the pension fund ABP, to increase the share of green investments in its portfolio, he said.

“It is also an example of the opportunities we see in private markets in addition to investing in public markets,” he said.

He declined to reveal the size of the Dutch pensions manager’s investment in the debt.