AXA IM’s Stoter calls for ‘bravery and transparency’ from managers

Stoter, who is global head of AXA IM Core, said asset managers had “collective power” to support the development of a sustainable global economy, but that the integrity of their commitments with regard to climate change was crucial.

AXA IM is a founding member of the Net Zero Asset Managers initiative. It has so far committed 15% of its assets under management to be managed in line with net zero by 2050, and has set a 2025 target for this proportion of assets.

These represent 41% of AXA IM’s corporate bonds, stocks and direct real estate portfolios, which are what the manager considers to be assets covered by net zero methodologies and where it has a capacity to effect change.

Echoing comments made in an opinion piece in IPE, Stoter said asset managers’ net-zero aspirations had been the source of negative headlines and that it was important to prevent greenwashing suspicions “slowing or derailing our collective efforts”.

Elaborating on his call for bravery and transparency, he said asset managers “need to show the world that we are serious about creating real change – and be clear about the reasons why”.

“We must be open about our responsible investment objectives next to the financial ones, and about the impact our conviction has on things like stock selection and asset allocation,” he said. 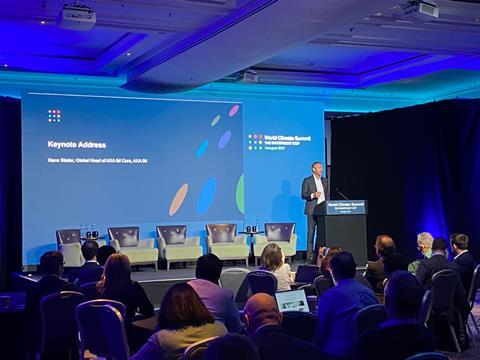 Stoter delivering a keynote speech at the World Climate Summit

“And we must provide good arguments, anchored in the transition mindset, when we decide that we want to keep a large greenhouse gas emitting business in our portfolios.”

Stoter also said asset managers needed to “show courage” with regard to their engagement with companies.

“We should demonstrate a proactive, objective record on the levers we can use, such as voting, to influence corporate decision-making around climate change. We should move quickly to detail candidly every engagement we make as soon as is practical – our goals, our successes, and our failures too.”

At the same time, asset managers needed to divest from big emitters if they refused to change or proceeded too slowly, he argued.

Delivered at the World Climate Summit, billed as the “Investment COP”, Stoter’s speech coincided with AXA IM announcing that it would divest from companies that have a high climate impact but are not taking climate change seriously if they don’t shape up over the years to 2025.

It said it would define a list of such “climate laggards” that are material in its portfolio and engage with them from 2022, “defining clear objectives, monitor actions taken until 2025 and divesting if progress on their net zero path is not substantial”.

Of the capital to be potentially divested from these companies, AXA IM would look to invest it in high impact climate leaders or those with a good carbon reduction track record and/or a formal improvement path with measurable objectives.

It said it would continue to work hard to identify such “transition leaders”.

“Transition laggards”, meanwhile, would continue to be the subject of investment and engagement by the asset manager to encourage them to accelerate changes, “notably through votes at annual general meetings,” AXA IM said.

The asset manager also announced new oil and gas exclusions. It said it was adding an absolute exclusion threshold for oil sands, ditching companies that derive more than 10% of production from the Arctic region, and excluding small companies with more than 30% exposure to shale/fracking.

Holdings in oil and gas companies that remained in scope would be sold after three years if insufficient progress has been made against clear objectives, AXA IM said. Although the aforementioned climate laggards category will likely include energy companies, the scope is broader.

In a statement, Marco Morelli, executive chair of AXA IM, said “the road to net zero is all about transition”.

“We must give companies the time to adjust but we must also adopt a no-compromise approach with investee companies that don’t take climate change seriously.”

NGO Reclaim Finance welcomed that AXA IM’s engagement with climate laggards would now be time-bound, but said three years was too long. The new exclusion criteria for unconventional oil and gas were a step forward, it said, although details were “hazy”.

It called for the asset manager to exclude companies opening new oil and gas fields, citing the International Energy Agency’s net-zero by 2050 roadmap.