The big four buffer funds backing Sweden’s state pension made a huge SEK236bn (€22.3bn) return on investments in 2019, but within their sustainability work, a carbon footprint reduction was partly cancelled out by investee companies increasing their emissions during the year.

Among individual reporting by the funds, AP1 announced a 15.1% return last year, which it described as its highest in a decade. Total net assets amounted to SEK365.8bn at the end of the year.

Acting chief executive officer Teresa Isele said that at the end of last year, AP1 had decided to develop its asset management with new equities strategies and a new organisational structure.

“These changes lay a better foundation for achieving our return targets, while also reducing our annual costs,” she said.

Earlier this month, AP2 – the only one of the four to be based in Gothenburg rather than Stockholm – reported a 15.9% return after costs of last year, with total assets growing to SEK381.3bn by the end of December.

AP3, meanwhile, also declared its return to be the best of the decade, reporting a 17.6% gain after expenses. Its fund capital grew to end the year worth SEK393.7bn.

But AP4 posted the highest return of all four funds, reporting a 21.7% return after costs, with the fund saying successful active management had contributed 4.4 percentage points of that.

Total fund capital increased to SEK418bn at the end of 2019, increasing AP4’s size lead over its three peers.

Niklas Ekvall, AP4’s CEO, said 2019’s strong performance in the financial markets should be seen in the light of the very tough end to 2018, with sharply falling stock markets and rising interest rates.

“AP4’s favourable result over time is largely due to the scope to manoeuvre provided by the buffer funds’ legal mandate, the ability to act long-term and withstand large market movements, and low-liquidity investments that are conducive to long-term returns,” he said.

The last few years have seen wrangling between stakeholders in the Swedish buffer fund system and politicians over how much investment freedom the funds should be allowed, resulting in two different pieces of legislation which have allowed more flexibility. 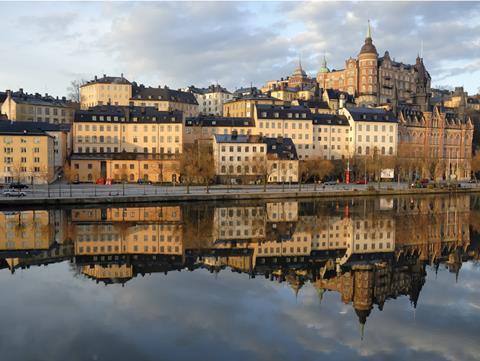 Since 2015, the AP funds said they had shrunk their carbon footprint by 23% in total

This work included creating a model for measuring carbon footprints, they said, to make it clearer what companies were contributing to, and also to shine a light on the result of funds changing their holdings.

However, as a group, they described how corporate behaviour had counteracted some of their efforts to rein emissions in last year:

Since 2015, the AP funds said they had shrunk their carbon footprint by 23% in total.

The four funds paid out SEK26bn to cover the payment deficit in the pension system in 2019, down from SEK27bn the year before.

The fifth buffer fund supporting the Swedish income pension system – which makes up the most of the state pension – is Gothenburg-based AP6, which is smaller than the first four and has a special mandate to invest in unlisted companies. It has yet to report 2019 results.

Separately, the largest of Sweden’s national pension funds, AP7, reported that savers in its key Såfa product – the default option within the premium pension system – had seen an average return on investment of 33.1% in 2019, which was the highest return in its history.

The premium pension forms part of the Swedish state pension and unlike the income pension, is a system of mandatory individual accounts.

Total assets in the two building-block funds behind AP7’s generation pension products – an equity fund and a much smaller bond fund – grew to SEK674m during the year from SEK460m.

“It is a return that one cannot expect every year”

Alongside investment growth, AP7 had seen a huge inflow of savings last year mainly as money was transferred from privately-run funds as they were withdrawn from the premium pension’s funds marketplace platform.

The funds marketplace is undergoing a radical overhaul, and in December 2018 all fund providers were required to re-apply for admission.

CEO Richard Gröttheim said AP7’s return had been boosted by gains in the global equity markets as a whole and by the weakening of the Swedish krona.

“It is a return that one cannot expect every year,” he cautioned, in the annual report.

During 2019, AP7 said in the report that it had continued developing its management model and the default alternative, putting a 2016 board decision into action.

“The purpose of the changes that have been made in the strategic portfolio in recent years is to increase the spread of risk in the default option, and at the same time reduce the overall level of risk by reducing exposure to the stock market, partly through reduced use of leverage in management,” the fund said.

Other areas of work AP7 mentioned in its annual report were assessing the feasibility of currency hedging for portions of foreign holdings, integrating sustainability issues into management, and broadening investments in green bonds.

New active mandates procured in 2019 would be implemented continuously in 2020, the fund said, adding that through this procurement, AP7’s active management would widen its scope.