The Canadian fund joins a growing number of asset owners to make such a move, although some are declaring an earlier deadline than 2050. Caisse de dépôt et placement du Québec, OTTP’s peer, is a member of the UN-convened Net-Zero Asset Owner Alliance and as such has also committed to net-zero portfolio emissions by 2050.

OTPP said that over the coming months, it would hold itself accountable by establishing concrete targets for portfolio emissions and its investments in climate solutions. It will report annually on performance against its goals.

“As a global pension plan, we will leverage our scale and influence to transition to a low-carbon economy and create a sustainable climate future,” said Jo Taylor, president and CEO of the C$205bn (€133bn) fund.

“With coordinated action net-zero by 2050 is an ambitious but achievable goal. We are committed to playing our part alongside other organisations and governments around the world to effect significant, positive change.”

Activists at Shift Action for Pension Wealth and Planet Health, which tracks Canadian pension funds’ fossil fuel investments, said OTTP should have released today the details about how it planned to achieve its goal.

OTTP today said some of the key elements of its net-zero approach would be to increase investments in climate-friendly investments and solutions, ensure portfolio companies manage and report their emissions annually, and advocate clear climate policies and partner with global organisations “to effect change”.

The fund is fossil fuel-free, excluding companies with fossil fuel reserves. An energy screen is also said to be applied, while positive tilts are applied to companies with green revenues and a strong climate strategy. The parent index is the MSCI Emerging Markets index.

According to Valeria Dinershteyn, senior sustainable investing strategist for EMEA and Asia-Pacific at the asset manager, the strategy delivers close to a 70% reduction in carbon emissions intensity and almost 100% in potential carbon emissions of the strategy against the parent benchmark. This is based on MSCI data.

Aegon UK has announced the launch of an ESG component for the default funds in its Aegon Retirement Choice (ARC) workplace pension proposition, with £1.7bn (€1.9bn) ultimately to be invested in a new fund developed by HSBC Global Asset Management.

The financial group described the move as “an early step” towards its portfolio emission reduction targets. Last week Aegon UK announced a 2050 net-zero emissions target for its auto-enrolment default pension funds, and an ambition to halve emissions by 2030.

From this month, Aegon said, key ARC default funds would start to invest in the HSBC Developed World Sustainable Equity Index Fund, reaching a total of around 30% of assets for members in the growth stage within six months.

It said around £1.7bn would end up being invested in the fund, a low-cost solution designed to track the performance of the FTSE Developed ESG Low Carbon Select Index before charges. 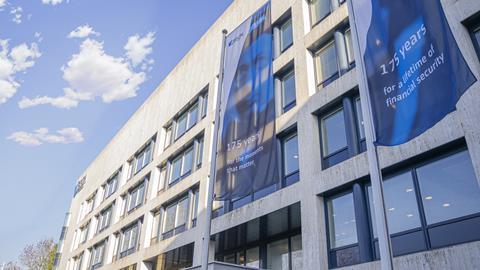 Aegon UK is the first investor in the fund, which targets improvements relative to the parent index with regard to ESG scores (20% uplift) and carbon emissions and fossil fuel reserves intensity (50% reduction). It also incorporates certain exclusions.

The change to the ARC range means that both of Aegon’s workplace pension propositions “include a significant ESG allocation in their respective default funds,” Aegon said.

Last year it added ESG elements to its default strategies for its master trust and TargetPlan product, which is for larger organisations than the ARC proposition.

Tim Orton, managing director for investment solutions at Aegon, said it had embarked on an “ambitious programme of change across our default range”.

Stuart White, UK and international CEO at HSBC GAM, said the new fund allowed for the underweighting of less desirable stocks without excluding them entirely, which “aligns with our approach of supporting companies as they transition to become more sustainable”.

A record $501.3bn (€412bn) was committed to decarbonisation in 2020 using a new, broad measure of energy transition investment compiled by BloombergNEF, the research provider said this week.

This was up by 9% on the previous year, it said.

The bulk ($303.5bn) of the investment was in new renewable energy capacity. BNEF said this was up 2% on the year, helped by the biggest-ever build-out of solar projects and a $50bn surge for offshore wind.

In 2020, companies, governments and households also spent $139bn on electric vehicles and associated charging infrastructure, up 28% and representing a new record. Other areas of investment were domestic installation fo energy-efficient heat pumps ($50.8bn, up 12%), stationary energy storage technologies ($3.6bn, level with 2019), and carbon capture and storage ($3bn, up 300%), and hydrogen ($1.5bn, down 20%).

Europe accounted for the biggest chunk ($166.2bn) of investment, driven by a record year for electric vehicle sales and the best year for renewable energy investment since 2012, said BNEF.

Jon Moore, chief executive officer of BNEF, said: “The coronavirus pandemic has held back progress on some projects, but overall investment in wind and solar has been robust and electric vehicle sales jumped more than expected.”

He added: “Policy ambition is clearly rising as more countries and businesses commit to net-zero targets, and green stimulus programs are starting to make their presence felt. Some 54% of 2016 emissions are now under some form of net-zero commitment, up from 34% at the start of last year.

“This should drive increasing investment in the coming years.”

The “ESG Fact Sheets” are designed to support borrowers in preparing ESG disclosure, and to facilitate engagement on important ESG topics between investors and the companies to which they lend.

The sector-specific guidance builds on a sector-agnostic guide, which the organisations said industry-wide engagement indicated was not enough.

Compiled with input from credit analysts, portfolio managers, and ESG specialists, the ESG Fact Sheets are intended to be used as a standard set of industry disclosures to bring greater consistency to ESG metrics.

A guide on ESG disclosure in leveraged finance transactions for company advisers has also been produced.

Sabrina Fox, CEO of ELFA, said: “Throughout our engagement we have observed a willingness to disclose ESG information, but borrowers and their advisers requested specific guidance on where to focus their efforts.

“The ESG Fact Sheets contain the topics that are most important to investors, which have been discussed with companies operating in those sectors.”