Former governor of the Central Bank of Iceland (Seðlabanki Íslands), Már Guðmundsson, has recommended in an officially-commissioned report that the ceiling on pension funds’ foreign currency exposure be raised or scrapped altogether.

In the conclusion of a report on the position of pension funds in the Icelandic economy, Guðmundsson argued the largest funds are already constricted in their desired and prudent allocations to foreign assets.

The report was commissioned by the Finance Ministry at the request of a number of members of parliament and published earlier this month.

It addressed a list of questions set by the parliamentarians, including how much government debt pension funds could collectively hold before the second-pillar pension provision effectively turned into a pay-as-you-go system, and how high a proportion of the domestic listed equities market the funds could own without undermining competition.

Though not asked to make recommendations in what was commissioned as an analytical report, Guðmundsson – who was governor of the central bank from 2009 to 2019 – did make two proposals at the end of the 20-page document.

The first was that a model be developed by the government and National Association of Pension Funds to better understand the “complex interplay between the pension funds and macroeconomic factors”, which would then be used by both parties in their policy formulation.

The second proposal was that the 50% cap on currency risk be increased or abolished altogether, while at the same time strengthening the regulatory framework around the funds’ risk management – and demanding they give clear explanations to scheme members and regulators about the share of foreign assets they hold at any given time.

“There are indications that the 50% cap on currency risk will hamper the foreign investment of the funds to the extent that they decrease it by more than is desirable considerably before this is achieved for the pension fund as a whole,” Guðmundsson said in the report.

Some larger pension funds in Iceland already had allocations to foreign assets of well over 40%, he said, but they dared not go much higher for fear that a depreciation of the króna or an increase of foreign stock prices could lift them over the 50% mark and land them in breach of the rules.

While the 50% ceiling only applied to currency risk and not foreign asset holding per se, Guðmundsson said the high cost of currency hedging made this an unaffordable option for pension funds.

He told IPE the 50% ceiling should be lifted to at least 60% in order to give pension funds the necessary freedom to increase foreign allocations to a level that was now appropriate from the point of view of both risk diversification and macroeconomic equilibrium. 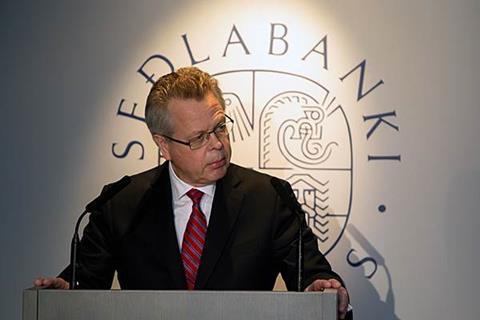 While pension fund allocations to foreign assets of around 35% – as aimed at by the funds a few years ago – might have been appropriate then, Guðmundsson said that the situation was different now as the funds had on average already reached that level, and because of pensions reform currently in the pipeline, under which private pension contributions are being increased to 15.5% from 12%.

“This means the funds will become significantly larger as a share of GDP, and there is the concern that if, as a group, they invest a large part of that in the domestic markets, this could lift domestic asset prices more than would be optimal from a stability point of view – or for their return prospects,” he said.

Guðmundsson said it was hard to say if his proposals would make it into law.

”The report is out, nobody as far as I know has objected, and in fact there have been rather favourable reviews,” he said. However right now, political parties were occupied with the general election taking place in Iceland on Saturday, he said.