Former chief of AP4 receives French award for his part in pioneering decarbonisation for pension funds. “You’re never a prophet in your own country,” he says.

Mats Andersson led Sweden’s AP4 for 10 years, but the impetus that propelled him onto the international stage to rouse pension funds to deal with climate risks came from France.

Earlier this month at the French Embassy in Stockholm’s Östermalm district, the former chief executive officer of the national pensions buffer fund received the Chevalier (knight) degree of the Légion d’Honneur.

In an interview with IPE, Andersson said: “I was surprised and deeply honoured.”

The order of merit was bestowed in recognition of the work he did at AP4 on climate change mitigation, and more broadly, his ground-breaking role in the decarbonisation of institutional investment assets around the world.

“In that work, I was supported by France Inc., politically, in the form of institutions such as Amundi,” he said.

“I’ve always had the backing from France, and always felt they’ve been at the forefront on sustainability and especially on climate change. So it was a perfect fit and I had great support from people – especially Patrick Bolton of Columbia Business School and Frédéric Samama of Amundi,” Andersson said.

It began in 2010, he said, when the pair convinced him at a conference that climate change needed to be monitored and mitigated by long-term investors – and how to do it.

Around the same time, he said, an old mentor – equity investor Laszlo Szombatfalvy – was getting interested in the investment implications of catastrophic risks that could jeopardise at least 10% of the population, such as climate, nuclear, biodiversity.

“I came to the conclusion that yes, climate did represent a risk, and that it was definitely one that could lead to a capital loss – so the question for me was, how do you mitigate this?

“I felt sure all the big pension funds around the world knew how to do this, and that we at AP4 didn’t need to reinvent the wheel. So I went out for one year in 2012, and I met 10 of the largest pension funds and asked about climate change risk, and they all came out with an answer that related to volatility,” Andersson said, adding that in his view, volatility is not a real risk.

So he asked what their exposure to climate change was.

“And none of them, I mean none, had any view or any answer at all,” Andersson told IPE. 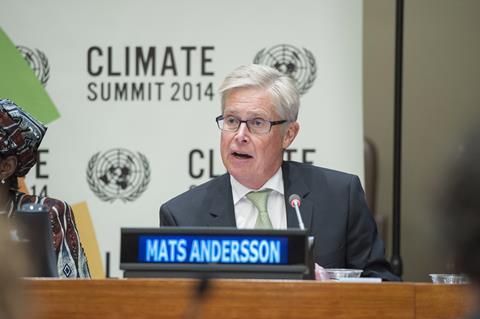 Mats Andersson at the UN climate summit in 2014

Back in Stockholm, AP4’s team then tried, with support from Samama, to find ways to mitigate climate risk in the portfolio.

Then in 2014, the UN Secretary-General at the time Ban Ki-moon was looking for hard decarbonisation commitments during the climate week in New York a year ahead of COP21 in Paris. Andersson said his French friends convinced him they should start an alliance – the Portfolio Decarbonisation Coalition (PDC).

“So they made me stand up in the UN General Assembly in September 2014 and a year later at the COP21 in Paris, I was to deliver a coalition of pension funds that had committed to decarbonise at least $100bn,” he said.

Though a seemingly impossible task, Andersson said momentum built in the last two months before Paris, and the coalition finally delivered 25 members with $3.5trn (€2.97trn) under management and $600bn of assets committed to be earmarked for climate change mitigation.

It was at the November 2014 IPE Awards that he won the Outstanding Industry Contribution award.

Andersson said his experiences have made him feel particularly connected to France.

“They have really made a change and really supported me and the mission – it’s been a cooperation of different organisations in France and Sweden,” he said.

But in Sweden, Andersson said, short-termism had been an obstacle.

“The AP funds law says you should take sustainability into account without giving up returns, which I believed was impossible when I arrived in 2006 [as AP4 CEO]. But then I realised if you have the right time horizon sustainability becomes a tool to mitigate and enhance returns,” he said.

The AP funds are subject to annual scrutiny carried out by the consultancy McKinsey.

“If you only evaluate in the short term you definitely start acting in a short-term way. But never mind – I’ve got more support from France Inc than actually in Sweden.

“But they say you never become a prophet in your own country,” Andersson said.