Kommunal Landspensjonskasse (KLP), Norway’s main municipal pensions provider, has appointed five new people to work on sustainability in its various divisions, and said having good in-house skill bolsters its credibility in talks with companies on such issues.

Heidi Finskas, director of corporate social responsibility, said: “We now have a very strong team within sustainability which, together with the rest of the organisation, will deliver on KLP’s strategy of good management in a sustainable way.”

The pensions manager said that regarding sustainability, more was now happening in the industry than ever before, and the need for societal change had never been so great.

“At the same time, KLP is now facing clear legal requirements in the area of sustainability for the first time in history, and KLP has constantly to work to understand its own sustainability risk better,” the firm said.

The new employees include Gjermund Grimsby who started in June as chief adviser climate change at group level, and reports to Finskas. He was previously partner and department head at Menon Economics.

Arild Skedsmo and Rina Narasimhan have been hired as senior analysts at KLP’s asset management subsidiary, KLP Kapitalforvaltning. Skedsmo has come to the institutional investor from a job as senior adviser at the Ministry of Climate and the Environment.

Narasimhan, meanwhile, was a sustainability manager at the Ministry of Transport.

Karolina Malisauskaite is due to start a job as analyst at KLP Kapitalforvaltning in July, after working as corporate governance research analyst at ISS.

In addition, Torunn Brånå has been hired as head of climate and sustainability at KLP’s general insurance arm, KLP Skadeforsikring, coming to the group from Kommunalbanken, where he was head of green finance. 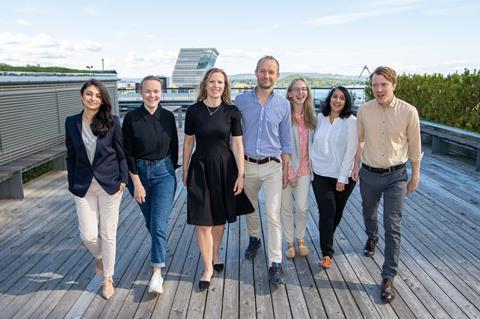 Finskas said that as well as the new sustainability appointees, it was also important to build skills within KLP for all those who did not have social responsibility or sustainability in their job title, in order to improve.

For example, she said, KLP knew it was stronger in ownership dialogues if it had good skills internally.

“It gives us credibility,” she said.

A spokeswoman for KLP told IPE that two of the new appointments at KLP Kapitalforvaltning were to replace other members of staff, whereas one was a newly-created role.

The role taken by Brånå at the general insurance division was a completely new one, she said, and added that in addition to the five new staff members, KLP Real Estate (KLP Eiendom) had added a new sustainability role last August.