Norway’s Kommunal landspensjonskasse (KLP) has confirmed it has joined one of the many investor lawsuits now underway to seek compensation from Denmark’s biggest bank after a huge money-laundering scandal halved the value of its shares in two years.

KLP is one of 63 plaintiffs in a writ submitted on 27 December 2019 in the Copenhagen district court by lawyer Ole Sigetty, partner at the firm Németh Sigetty.

Jeanett Bergan, KLP’s head of responsible investment, told IPE: “In the last two years, our holdings of Danske Bank equities have lost half of their value as a result of the money-laundering case.”

The NOK745bn (€75bn) pension fund’s stake in the Danish bank is now worth NOK120m, she said, providing a figure which implies the fund lost around €12m.

Bergan described the lawsuit KLP had joined – which is seeking DKK1.5bn (€201m) in damages – as a very standard class action.

“We participate in class actions quite often; whenever there is money on the table we claim our right in the settlement, and monitoring the cases that are out there is a service we get from an external provider,” she said, adding that in certain jurisdictions, including Europe, it was necessary to be part of the action from the beginning in order to be part of the settlement.

While KLP would opt out of any collective actions it thought were unreasonable, she said this particular case was not considered as such.

“The investors suffered losses because Danske Bank did not comply with the money laundry legislation and its obligations to inform the market of important matters,” he said.

“When this was reported by the press, the shares dropped more than 50% over time as matters were revealed,” said Sigetty. 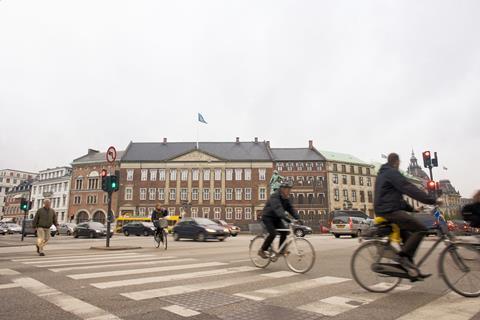 This collective lawsuit is only one of the class actions being brought against Danske Bank for investment losses suffered as a result of the affair that pension funds have joined.

Danish law firm Njord is working on a case and partner Thomas Ryhl told IPE it expects to file well before the end of this year.

“We expect to file the joint claims of a double-digit number of large institutional investors, each representing a number of savings and pensions funds,” he said.

A year ago, the firm said it assessed that Danske Bank had failed to comply with its obligations to disclose information to the market about the gravity and scale of the money laundering issues in a timely manner — which resulted in inflated prices for the bank’s share.

Ryhl said he would argue that since then, the actions of public authorities and other claimants, as well as the stories covered by the media, had only served to further strengthen the case against Danske Bank.

In October 2019, US law firm Grant & Eisenhofer said a second wave of lawsuits in a case it was bringing had been filed in Copenhagen’s city court by an international coalition of institutional investors in the ongoing financial fraud case against Danske Bank.

“Since the second wave of filings, we have over 200 institutional investor claims and our damages claims are approximately $800m,” adding that with a third wave of claims his firm would file in February, this figure would probably reach €1bn.

In a general comment on the class actions, Danske Bank said in a statement it was defending itself against these claims.

“The timing and completion of any such lawsuit is uncertain, and we consider any development together with our external counsel. At this stage, we have no further comments,” the bank said.

Bergan said that despite the legal case, KLP was on good, cooperative terms with Danske Bank.

“We have a very good dialogue with Danske Bank, and they are now making sure they have the AML (anti-money laundering) system in place to lower future risks,” said Bergan.

“A lot of people would criticise investors for being part of these cases, because it is the shareholders who carry the cost of them. But at the same time, if we didn’t take part, we would lose out because we would not benefit from the recovery,” she said.

Bergan said it was also important to be involved for the sake of broader corporate responsibility, and the necessity of having it tested in law.

“Class actions are an important part of the legal system to provide a justice tool for smaller individuals,” she added.