The manager of Norway’s huge sovereign wealth fund (SWF) has implemented regular meetings to discuss all aspects of the COVID-19 crisis, as it continues to handle the Nordic nation’s petroleum wealth in extraordinary times.

Meanwhile, the publicly-stated value of the SWF – the world’s largest – has paradoxically held up well amid the plummeting stock prices seen around the world in the last few weeks.

This comes as the Norwegian currency has lost around a third of its value in the same period.

Asked what NBIM was doing to cope with the COVID-19 situation across its operation, a spokeswoman told IPE:

“Norges Bank have taken necessary measures to ensure that all our systems are operative and that all critical activities are carried out.”

This included regular meetings to address all aspects of the ongoing situation, she said.

“We are a global institution with good digital communication tools and have already good routines and experience with digital team work across multiple locations,” the spokeswoman said.

The fund itself, the Government Pension Fund Global (GPFG), yesterday returned to around the same value as the end-2019 figure published in NBIM’s annual report of NOK10.1trn (€862bn).

Today, the rolling figure on NBIM’s website was below that, at NOK9.7trn.

Given that the Norwegian oil fund had 70% of its assets invested in global equities at the end of 2019, it seems likely that it has sustained wide losses since the beginning of this year measured in other currencies or in the basket of currencies NBIM uses for some reporting.

The Norwegian krone fell to a low of NOK12.30 to the euro yesterday, compared to NOK10.14 on 24 February and NOK9.84 on 1 January, according to data from Reuters. The unit is currently trading at around NOK11.60. 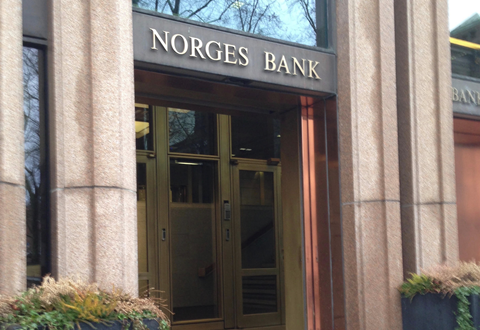 Since 1 January, at its weakest point yesterday, the Norwegian unit had weakened 25% against the euro and 28% against the US dollar.

The slump in oil prices since the failure of oil producing countries to agree on production earlier this month is a major factor for Norway’s oil price-dependent economy.

While the Norwegian central bank, Norges Bank, has been easing credit to help domestic firms struggling with the effects of measures taken to limit the spread of COVID-19, it is also considering intervening in the currency markets to support the krone.

At an extraordinary meeting yesterday, the bank’s monetary policy and financial stability committee unanimously decided to reduce the bank’s key policy rate by 0.75 of a percentage point to 0.25%, and the bank also stated that it did not rule out more cuts.

Norges Bank also put out a statement yesterday, saying there had been “an extraordinary situation” in the market for Norwegian kroner in recent days and that movements in the exchange rate had been historically large.

“Against this background Norges Bank is continuously considering whether there is a need to intervene in the market by purchasing Norwegian kroner,” the bank said.

Asked how much the GPFG’s value had actually changed over the last two weeks when measured in the basket on international currencies NBIM used for reporting, a spokeswoman for the manager told IPE: “We are planning a press brief next week and I regret to inform you that we have no comments prior to that.”

That briefing is NBIM’s planned press event for the risk and return report the organisation is due to release on March 26, she said.