In its revised 2021 budget, the Norwegian government is stepping up the amount of money it plans to use from the Government Pension Fund Global (GPFG) this year as it battles the economic impact of coronavirus, bringing the annual withdrawal to the highest level yet.

Presenting the plan today, Prime Minister Erna Solberg said: “With the revised budget we are strengthening the effort to create more jobs and include more people in the labour market.”

The Ministry of Finance said that in the revised national budget, it was now estimated that spending of oil revenue would be NOK402.6bn (€40.1bn) this year, nearly NOK90bn more than originally proposed in the 2021 budget last autumn.

This compares with a figure for 2020 of NOK369.3bn, according to the ministry’s figures.

“Extraordinary economic support measures related to the pandemic accounts for a large bulk of the increase,” it said.

According to Norway’s fiscal rule, over time transfers from the GPFG to the central government budget are to equal the fund’s expected real return, which is estimated at 3%.

The revised figure for 2021 oil revenue spending – termed “structural non-oil fiscal deficit” in the government’s accounts – is estimated at 3.7% of the fund, up from the 3.0% in the earlier version of the budget, the ministry said.

According to government figures, Norway saw mainland GDP fall by 2.5% in 2020, but by this measure, the economy is predicted to grow by 3.7% this year.

Finance minister Jan Tore Sanner told a press conference this morning: “It has been right and necessary to implement powerful financial measures to give people security, and to help companies in crisis through the pandemic.”

The alternative, he said, would be more bankruptcies and higher unemployment. 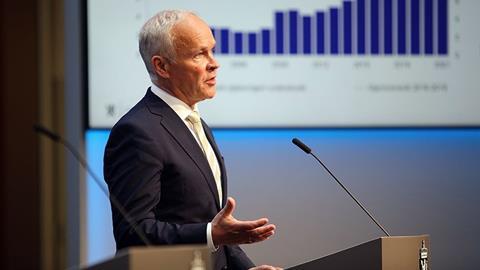 “It is in line with the action rule to increase the use of oil money in times of crisis such as this,” Sanner said.

But when the crisis was over, spending had to be reduced, he said, in order to create room for value creation in the private sector, ensure the long-term sustainability of Norway’s welfare society, and to safeguard its ability to deal with new crises when they came.

“Managing oil wealth is ongoing work, and it is when spending is higher than the long-term guideline that both policy and the fiscal policy framework are put to the test,” Sanner said.

The first time Norway’s government withdrew money from the GPFG was 2016 – 20 years after the first inflow to the fund from the country’s petroleum revenues – with Norway’s financial fortunes having been hit by the fall in the global price of oil.

A smaller amount was withdrawn in 2017, which was followed by two years with net inflows into the GPFG.

In 2020, however, the net withdrawal by the government was NOK298bn, according to NBIM.