In a pair of pre-Christmas letters to Norway’s Finance Ministry, Norges Bank Investment Management (NBIM) said it supports an official proposal that the oil fund adopt a long-term net-zero climate emissions target for its stocks.

NBIM, which manages the NOK12.2trn (€1.2trn) Government Pension Fund Global (GPFG), also asked the government to be allowed to make its own decisions on climate exclusions rather than defer to its Council on Ethics.

In August, a government-commissioned report into how the fund should act regarding climate change recommended a mandate change to include a net-zero goal for greenhouse gas emissions by 2050 in the companies it invested in.

In one of the letters published today – written in response to the Ministry’s request for NBIM to say how the expert group’s recommendations might be implemented – NBIM referred to the net-zero goal idea, and said: “Norges Bank supports such a goal.”

The letter went on: “A long-term goal for the Bank’s responsible investment will give clearer direction to our ownership activities and our work in on climate issues.”

In the letter about the GPFG’s climate risk work, Øystein Olsen and Nicolai Tangen – chair of NBIM’s supervisory board and its chief executive officer, respectively – noted the expert group recommended that the long-term goal be supplemented with intermediate targets for individual companies’ emissions.

“We will strengthen our work on analysing decarbonisation pathways for individual companies in which the fund is invested and use these analyses in our follow-up of companies,” the pair wrote.

The information obtained, they said, might also be of use in active investment decisions and risk management.

In late November, Norway’s new Prime Minister Jonas Gahr Støre – who took office in October – said his government wanted the SWF’s responsible management to have an overall long-term goal of net-zero emissions from its corporate investments. 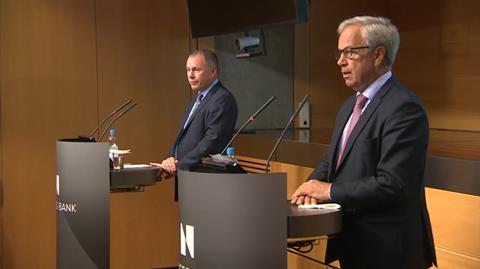 Olsen and Tangen said both the expert group’s and Norges Bank’s recommendations were based on the objective for the fund’s investments of “the highest possible return within the constraints imposed by the management mandate”.

“The management of climate risk in the fund is therefore rooted in the fund’s role as a financial investor,” they said.

Assessing climate risk was an integral part of its management of unlisted real estate, NBIM said.

In August, an international grouping of economists and experts urged the SWF to join the UN-convened Net Zero Asset Owner Alliance.

Commenting on external cooperations, NBIM said in the letter that it was cautious about participating in initiatives that demanded, or might come to demand, the setting of goals inconsistent with the investment strategy set out in the management mandate.

“As a large sovereign fund, we are also wary of participating in initiatives that target other countries’ climate policies,” the NBIM leaders wrote.

However, they also said that working with others could increase the impact of NBIM’s ownership efforts, and revealed: “We have therefore started a dialogue with Climate Action 100+ to see how well the initiative aligns with our management mandate, what resources this co-operation might require, and what role we would be expected to play.

“We regularly carry out similar assessments of other initiatives,” the pair added.

In a second letter to the Ministry published today – on NBIM’s experience of the climate criterion which was added to the GPFG’s guidelines for observation and exclusion in 2016 – the bank suggested the government could change the status quo so that NBIM could itself decide on removing stocks from its portfolio based on climate risk, rather than leaving the Council on Ethics to make such decisions.

“Once we have gained experience of working with companies on net-zero targets, the Ministry might consider whether Norges Bank should be permitted to take decisions on observation and exclusion under the conduct-based climate criterion on its own initiative, as is currently the case with the coal criterion,” Olsen and Tangen wrote.

Although the bank can make risk-based divestments on its own, the pair said these were active investment decisions, and the companies remained in the fund’s benchmark index and investment universe – unlike with ethical exclusions, which are decided upon by the Council on Ethics.

“As a result, risk-based divestment will generally only be an option for small companies, as this draws on the fund’s limit for deviation from the benchmark index,” the NBIM leaders wrote.

Last week, NBIM revealed the first steps it had taken in a new sustainablity pre-screening approach under which it bars some new index entrants from entering the SWF in the first place – new work that it hopes will add to financial returns in the long run.