A government-commissioned report into how Norway’s giant sovereign wealth fund should act regarding climate change has recommended the fund effectively adopt a net-zero goal for greenhouse gas emissions by 2050, while the country’s finance minister agreed it was time for higher ambitions.

The report’s conclusions come amid calls from Norway and beyond for the NOK12.3trn (€1.2trn) Government Pension Fund Global (GPFG) to commit to net-zero emissions by 2050, in line with the Paris Agreement, but the government says the political consensus is the fund should not be a climate policy instrument.

Martin Skancke, chair of the PRI board and leader of the expert group tasked in February with investigating financial climate risk and climate-related investment opportunities in relation to the GPFG, presented the report this morning at an online seminar hosted by the Finance Ministry.

The report makes four main recommendations, including anchoring the GPFG’s work on climate risk “in the mandate issued by the Ministry of Finance, under which Norges Bank’s responsible investment is based on an overall long-term goal of zero emissions from the companies in which the fund has invested, in line with the Paris Agreement.”

The other recommendations are establishing a set of principles for managing the GPFG’s climate risk; further development of Norges Bank’s ownership activities to influence companies’ behaviour and strengthen the market’s functioning through better climate risk reporting, and having special regulations for measurement, management and reporting of climate risk.

They said in the report: “A number of investors have now set a long-term target for a climate-neutral portfolio,” and referred to the Net-Zero Asset Owner Alliance.

“After an overall assessment, we recommend also setting such a target for the responsible investment management in Norges Bank,” the report went on.

Such a long-term goal of working towards net-zero greenhouse gas emissions in the portfolio companies by 2050 using regularly updated intermediate targets, could, they said, help demonstrate consistency between the guidelines for managing the fund and the ambitions in the Paris Agreement to which Norway was a party.

The group said the target would be a natural reference point for assessments of emissions from the companies in which the fund has invested.

Aligning the target with other leading investors internationally would facilitate joint development and standardisation of forward-looking indicators for emissions, they argued.

However, they said such a target was not intended to set a guideline for the composition of the benchmark index set by the Finance Ministry – but to strengthen climate risk management in Norges Bank’s management in general and ownership strategies in particular.

“The formulation has been chosen to be able to remain in place even if there are other agreements in the climate area that replace or complement the Paris Agreement, but will for practical purposes mean that a goal of zero emissions by 2050 will be a long-term anchor for the fund’s work on climate,” the report said.

Finance Minister Jan Tore Sanner said at the seminar that tomorrow’s framework for the GPFG had to be based on updated knowledge. 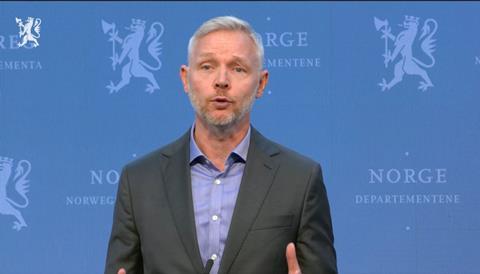 Martin Skancke, chair of the PRI board

“For the fund, like society in general, is affected by climate change, and benefits from us achieving the goals of the Paris Agreement,” he said.

The work by the expert group as well as the assessments from Norges Bank on climate risk would be followed up by the ministry in its report on the SWF in the spring of 2022, Sanner said.

“And to conclude I would also say that there was a headline of the debate article by Skancke in the Dagens Næringsliv today, which I also recommend, namely that it is time for a higher level of ambition,” he said at the seminar.

The 147-page report also rejects – as NBIM has – the idea of switching the GPFG’s benchmark to a climate-adjusted index, saying there is no reason to believe climate risk will be systematically mispriced in the market “over the long time horizon that is relevant for determining the fund’s benchmark index”.

Norges Bank was already free to deviate from the benchmark index set by the ministry, in order to fulfil the objective of generating the highest possible return after costs, the group said.

They also questioned the future rationale for the GPFG’s special environmental mandates.

“If a more ambitious scheme is established for climate risk management and reporting that permeates the entire fund, it may be natural to assess whether there is still a need for a separate environmental mandate,” they said.