The Yell Pension Plan, the pension scheme of UK’s provider of digital marketing solutions, has concluded a full scheme buy-in with Pension Insurance Corporation (PIC), a specialist insurer of defined benefit pension funds, covering the £370m (€424m) of remaining liabilities of the plan.

The transaction takes total plan liabilities covered by PIC to £570m, it was announced.

PIC secured an initial £200m buy-in with the plan in 2014, insuring 500 pensioners. This latest transaction has been agreed in expectation of the full plan moving to buyout when all 1,800 plan members will become PIC policyholders.

LCP was the lead transaction adviser to the scheme’s trustee and Allen & Overy provided legal advice. PIC was advised by Herbert Smith Freehills.

Chair of trustees John Reeve, of Finsbury Trustee Services Limited, said: “Yell and the plan’s trustees worked closely together for many years to improve the plan’s funding levels and by working with PIC, we were able to act quickly to secure our members’ futures. I want to extend my thanks to the trustees, past and present, and the sponsoring company for this great result for members.”

Uzma Nazir, head of origination structuring at PIC, said: “The trustees acted quickly to use their improved funding position to secure the remaining uninsured liabilities. Given our existing positive relationship with the plan, they approached us to provide an insurance solution. This transaction has helped the trustee complete the de-risking of the plan, remove risk for the sponsoring company and provide better security for its members in times of economic uncertainty.”

Automatic enrolment: ‘slipping through the net’

With the 10-year anniversary of automatic enrolment (AE) next month, research conducted by Legal & General Investment Management (LGIM) shows that thousands of individuals across financially vulnerable groups in the UK could be “slipping through the net”.

The findings shine a light on the education gap within pensions and the potential retirement crisis for those currently falling outside the eligibility thresholds for AE. The research was carried out against a backdrop of rising inflation rates and the daily challenges people are facing with the cost of living crisis.

LGIM claimed that there is still a widespread misunderstanding of the rules around how pensions work, employer contributions, tax savings and AE thresholds, particularly with younger workers.

The research found that nearly two thirds (62%) of younger workers didn’t realise they could ask to be enrolled, while more than half (59%) said they were not aware that employers wouldn’t have to make contributions on the first £6,240 of their income.

The research also showed that within the cohort of lower wage workers, part of the reason for not contributing was because of a lack of information. For instance, 38% of low-paid workers not currently in a workplace pension would have joined their employer’s pension scheme if they had been aware that they had the right to ask, while 38% said their employer had not explained the eligibility rules for joining their workplace pension scheme.

More than 12 million Brits in the private sector are saving into a DC pension scheme, meanwhile, just under 1 million are active members in private sector DB schemes. 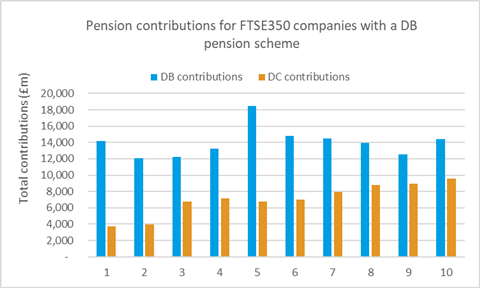 FTSE350 companies with a DB scheme contributed £14.4bn to those schemes in 2021. Of this, £9.8bn is used to pay down past service deficits; largely paying for the historic promises made to ex-employees. The remaining £4.6bn relates to DB pension accrual – that is, building up DB pension for current employees.

The total figure has stayed roughly steady over the past decade; in 2012 it was £14.2bn, with some fluctuation in the interim, Barnett Waddingham’s research revealed.

Meanwhile, DC contributions by those companies in 2021 totalled £9.6bn. This has increased steadily over the past decade since auto-enrolment legislation was introduced in 2012, when DC contributions were £3.7bn. However, it remains just 40% of the total pension costs of these companies.

Simon Taylor, partner at Barnett Waddingham, said: “The pension contributions for the FTSE350 companies with DB schemes provides a stark illustration of the enduring intergenerational fairness debate. In aggregate, these FTSE350 companies paid more to clear DB pension deficits over 2021 than the amount paid to fund DC pension savings for current employees.”

He noted that despite the success of AE, “it is extraordinary that the promises made to (generally) former employees continues to account for higher expenditure than pension saving for current staff”.

“Current DC members exist in a different financial reality, with a starkly different retirement outlook to current DB members. For companies with both DB and DC schemes, they must consider all of their stakeholders and decide upon the fairest and most prudent allocation of resource moving forwards,” he said.