The United Nations Joint Staff Pension Fund (UNJSPF) is gearing up to test the use of biometrics and other modern technologies to certify pensioners’ benefit entitlement after more than 70 years of a manual, paper-based process.

The move to launch a pilot project follows a successful “proof of concept” prototype that used biometrics, blockchain, geo-location, and mobile apps, according to a statement from the $60.8bn (€54.9bn) defined benefit pension fund.

The prototype was created and tested in collaboration with the International Computing Centre, an information technology and communications provider within the UN system.

According to the UNJSPF, the proof-of-concept experience “confirmed the value of digital identity and blockchain technologies to automate the certificate of entitlement process with secure mechanisms that create traceable, immutable, and independently auditable evidence”.

It added that the proof of concept aimed to “overcome the limitations of the existing manual process and prevent new risks from happening, which could hamper the flow of entitlements”. 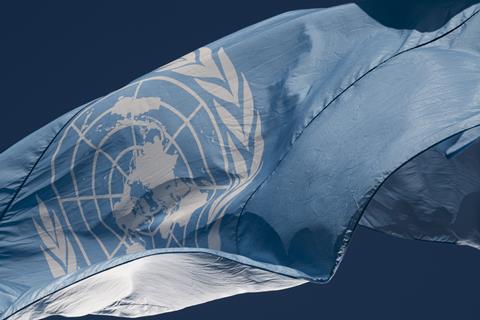 Every year the pension fund has to verify more than 70,000 beneficiaries located in more than 190 countries, confirming they are still alive.

For the last 70 years, this confirmation has required every beneficiary to return a signed paper-based form – a certificate of entitlement – which is currently sent by regular post.

The pension fund also has to confirm beneficiaries’ residence if they are paid under a “local track” system, which converts the value of US residency-based benefits to a local currency and local cost of living.

According to the UNJSPF, the biometrics were used for personal identification and confirming a beneficiary was still alive, while geo-location was used to confirm a beneficiary’s residence.

Following the success of the proof-of-concept prototype, the pension fund is taking steps to start a pilot project with a view, if successful, to implement the solution for all new retirees.

New pensioners of select UN entities or member organisations will be given the opportunity, on a voluntary basis, to use and test the new approach.