Yngve Slyngstad, chief executive of NBIM, said: “The fund’s cumulative return since inception has passed NOK4trn. A quarter of that return was generated in 2017, after a very good year for the fund.”

“The return was particularly strong in large Asian markets, most notably China and India,” NBIM said in the report.

Emerging markets, including frontier markets, accounted for 11% of the fund’s equity investment at the end of 2017, the manager said.

NBIM is in the process of increasing the GPFG’s exposure to equities, after the government decided a year ago to lift the allocation to 70% of the fund. 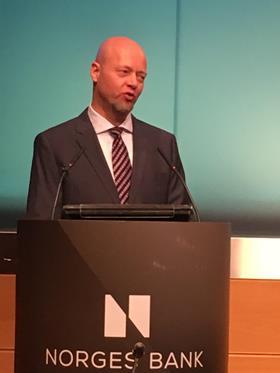 In terms of geographical allocation within equities, NBIM said the UK was the GPFG’s second largest single market with 9.7% of its equity investments. US equities accounted for 36.1% of the fund’s equity holdings.

Asked at a news conference in Oslo this morning whether developments in the Brexit discussions and negotiations would affect this allocation, Slyngstad said they would not.

“We remain a long-term committed investor to the UK in all asset classes and we have a substantial portfolio of real estate in the UK, and this will remain at about the same level no matter what the result of these political discussions,” he said.

The GPFG’s investments in the UK stockmarket were primarily in large companies with a global footprint, Slyngstad added.

The Norwegian government withdrew a net NOK61bn from the fund in 2017, compared to the NOK101bn it took out the year before. The first withdrawal ever from the fund was in January 2016, when the state took out NOK25bn.