9
Sweden: AP7 could double after reforms

Sweden: AP7 could double after reforms

Despite serving a different purpose from its five counterparts in the Swedish pension system, the seventh national pension fund, AP7, has roughly the same level of AUM as its counterparts (see figure).

But, that could change if new reforms to the country’s premium pension system (PPM) are adopted in their current form.

Introduced in 1999, the defined contribution (DC) premium pension forms part of the mandatory public pension system, and allows Swedes to chose how 2.5% of their pensionable earnings is invested.

While national pension funds AP1-4 and AP6 serve as buffer funds for the state pension, AP7’s role is that of default provider in the PPM.

In late September, the Premium Pensions Committee (PPC), led by Patric Thomsson, a former director in the finance ministry, submitted a report on how the system could be improved to ensure better outcomes for savers to Per Bolund, the minister for financial markets.

The report was the result of two years of work. One of the main changes Thomsson’s committee has put forward could lead to a doubling of AP7’s assets under management.

At the moment, the pension fund, which manages two main investment funds – an equities fund and a bond fund – providing a combination of the two, has SEK283bn (€31bn) under management, in a similar range to the assets of each of the AP funds 1-4. 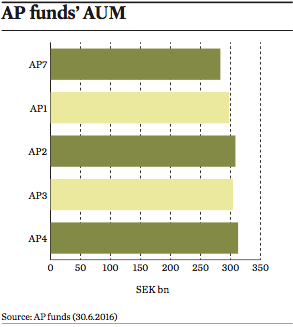 AP6, meanwhile, has a different investment brief from the first four AP funds. It only invests in unlisted assets, and had SEK26.4bn under management at the end of 2015.

The committee proposes a range of changes to pension fund selection procedures and the information given to consumers by the government. The headline change is to require savers in the future to actively renew their choice of premium pension provider and product every seven years.

These new pension savers would be informed that their funds can be invested via any of the other management models, either by AP7 or through funds in the PPM fund marketplace, according to the report.

Thomsson justifies these proposals, saying it is “reasonable” to require people going down the ‘own portfolio’ or ‘risk portfolio’ route in the PPM to take an active stance over their choice.

• The use of gearing has helped AP7 to produce high returns over the past few years, although returns were lower in 2015 – coinciding with a decision by the fund to reduce its leverage.
• 2015’s return was 6.3%, down from the record of 34% in 2013 and 31.1% in 2014, although it was seen as acceptable by the fund, which said it was more in line with the growth scheme members could expect.
• AP7 decided in the first half of 2015 to cut the gearing in its equities fund to 125% from 150%.
• Even though privately managed funds in the PPM on average outperformed AP7 in 2015, returning 6.7%, since inception, the default fund has produced 115.3% asset growth compared with the average of 50.2% for private funds.

The report estimates that the changes could result in a shift of between SEK100bn and SEK380bn of savings assets to AP7 from the fund-of-funds marketplace – with the savings of between 600,000 and 2.3m people moving to AP7. But while AP7 might welcome these potential inflows and see the proposal as recognition that it has been efficiently run and produced good results, how will it be able to cope with such an influx?

Richard Gröttheim, chief executive of AP7, is confident: “AP7 can handle a large increase in assets under management without having to make any significant changes in strategy or organisation,” he says. “The main consequence would be that economies of scale increase and that we can reduce fees further.” 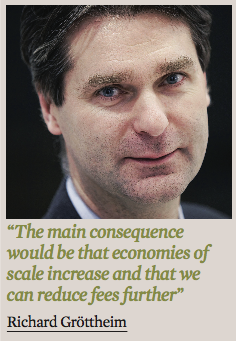 Gröttheim agrees with the PPC’s conclusion that savers should be forced to make more active choices, in the light of observations of behaviour so far. “There is a group of savers on the fund platform that, in practice, are completely passive. Research reports show that this group has the worst returns in the system,” he says.

Against this background, Gröttheim argues it is not unreasonable to ask these savers, after seven years, to confirm that they really want to continue investing in the funds they are in.

The large number of providers in the PPM marketplace has caused considerable debate in Sweden, and restricting their numbers is one of the measures under consideration.

In September, Pensionsmyndigheten (the Swedish Pensions Agency) acted to shore up consumer protection against “rogue players” that had appeared among premium pension providers, saying that people had been deceived by sales callers claiming to be from the agency itself, or even saying that the default fund option from AP7 had been closed.

In one of the original briefings to the PPC, the panel was asked to describe and analyse the consequences of replacing the PPM marketplace with up to 10 state funds.

But such measures have been rejected in the final report. In its overall assessment, the committee says the previous results and assumptions about the expected future outcome show that more pension savers and pensioners can get better premium results “without the need to reduce the option of choosing from a variety of asset managers and funds, for those who wish to take advantage of the opportunity”.

Whether the inquiry’s proposals are passed to parliament in their current form depends, among other things, on the results of the broad consultation process now taking place until the start of February 2017.