The fluctuations of single factor returns have bolstered multi-factor strategies

Before COVID-19 ravaged global stock exchanges, smart beta or factor strategies were climbing to new heights, sparking concerns of overcrowding and high valuations. While inflows will be stalled in the current volatile environment, along with many other investments, few expect these funds to lose their allure once the dust eventually settles. Crowding as before may become an issue but there is little evidence to suggest that this affects their valuations over the long term.

These views were reflected in a recent study by Aon – ‘Standing Out From the Crowd’. One reason, according to Andrew Peach, principal consultant and one of the authors of the paper, is that “while they have become more popular, they still represent a small percentage of the overall market. Also, there has been an exodus from active managers and the money has been redirected into passive strategies because they are seen as more cost-efficient.”

Take European equities. Figures from Morningstar show that total assets under management (AUM) in smart beta exchange-traded funds grew by more than a third in size to $71bn over the course of 2019, thanks to rising markets. However, they still accounted for only 7.2% of the total inflows into European exchange-traded funds (ETFs). The research group also showed that in the US, passive management now accounts for 45% of all assets for US stock-based funds, up from about 25% a decade ago.

Peach also notes that, just because valuations may be lofty at a certain point of time, it does not reflect a long-lasting trend. For example, he says that over a seven-year period, 2012-19, the momentum and low volatility or minimum volatility in MSCI index parlance have consistently been pricier than value which has been bumping along the bottom. “However, factors move in cycles and this does not suggest a permanent trend,” he says.

Joop Huij, head of factor investing research at asset manager Robeco, agrees adding factors’ premiums vary over time which is why value’s recent prolonged underperformance did not come as ‘something impossible’ to most industry experts. He points to value stocks faring poorly for most of the 1930s as well as for a significant part of the 1990s.

Ronen Israel, principal at AQR Capital Management, also contends investors need to put valuations into historical perspective. For example, low volatility which has been among the most popular over the past few years, “may be a bit more expensive but not outlandishly so and not outside the normal range of the valuation spread – the difference between valuations of low-volatility and high-volatility stocks. We haven’t seen the secular decline in valuation spreads that you’d expect if factors had gotten too crowded. For the most well-known factor, value, the spread has actually widened.”

Implementation matters
Some market participants, such as Research Affiliates founder Rob Arnott, are more circumspect. He co-authored a research paper entitled ‘The incredible shrinking factor return’ which warned investors over the substantial slippage observed between theoretical and realised factor returns due to the costs of implementation. These included items that can be related to crowding, such as missed trades or bid-ask spreads.

“Higher demand can push price multiples higher,” says Feifei Li, partner, head of equities of Research Affiliates. “It’s like a sugar rush but it does not explain the whole story. It depends on how the strategies are constructed and the level of illiquidity. For example, small caps are more sensitive to crowding while the more liquid are less sensitive to huge inflows.”

A paper co-authored by Huij a couple of years ago looking to quantify the rebalancing costs for smart beta benchmark showed similar results. “What we found is that factor indices tend to be over-weighted in smaller stocks, which are more prone to front running and overcrowding than the larger market cap-weighted indices,” he says. “It is a complicated question because the extent to which there is overcrowding depends more on how the strategies are implemented than with the potential disappearance of factors.” 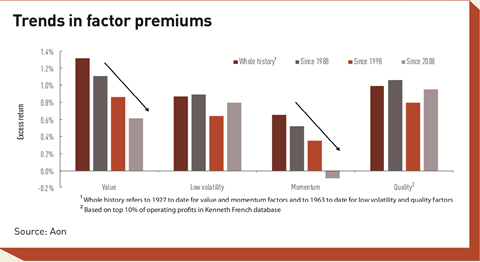 Some industry experts also note that the economic environment is too often dismissed as a driver of valuation. This is particular true in the current situation where markets are wrestling with an unprecedented and unmodelled event of Covid-19. A snapshot of the first quarter of 2020 by Robeco shows that momentum and low volatility turned in positive performances of 5.3% and 1.5% respectively compared with the overall market’s negative 19.9%. Small caps suffered the biggest decline at 11.2% followed by value or dividend stocks, down 9.6%. Overall, stock markets turned in their largest one-month declines since the global financial crisis in 2008.

“Equity investors tend to look in the rear-view mirror when estimating factor returns but the shift in the macro environment has a significant impact on expected returns, says Hal Reynolds, chief investment officer at Los Angeles Capital. “It is no surprise that over the past decade as well as today, that momentum and low volatility have been successful strategies. Low vol is a great risk management tool while momentum is an alpha management tool.”

Multi-factor funds
One response to the fluctuating fortunes of single factors has been the rise of multi-factor strategies and funds. Results from the 2019 FTSE Russell Investment smart beta survey found that 71% of the 178 global asset owners polled used these products, up from 49% in 2018. By contrast, single-factor products were in far less demand with the two most fashionable — low volatility and value — employed by only 35% and 28% of respondents, respectively.

Studies from Kenneth R French Data Library also show these multi-factor strategies outshine their single factor peers over the long term. The research, which dates back to 1926, found that excluding transaction costs, a multi-factor portfolio which allocates equally to the value, size, and momentum factors, significantly outperformed the US stock market over the past 90 years. The only challenging periods were during the Great Depression between 1929 and 1939 and over the past 10 years. This downward pattern is expected to be repeated during the current COVID-19 crisis.

“Implementing a multi-factor strategy is key as factors have low or negative correlations, which may lead to the underperformance of one factor, for example, value, being offset by the outperformance of other factors,” says Kal Ghayur, managing director and head of the ActiveBeta strategies business at Goldman Sachs Asset Management. “It is important though to implement multi-factor strategies with equal risk contributions from the considered factors to ensure proper diversification.”

He adds that, “efficiently diversified multi-factor strategies may also result in more balanced sector exposures. For example, during the current pandemic-driven market turmoil (markets stated their slide in late February), low volatility factor strategies have not worked as well as expected because they were overweight utilities, insurance companies and real estate and these sectors were more affected. They were also underweight biotech, pharma and tech which did very well.”

BNP Paribas Asset Management, on the other hand, offers multi-factor investing as a core equity exposure, and single factors are used for specific factor exposures such as low volatility. However, instead of taking a universal broad-brush approach, the French group implements a low volatility strategy while reducing sector biases, according to Grégory Taïeb, quantitative investment specialist at BNPPAM. In practice this means, for example, not filling the portfolio with the typical defensive sectors such as healthcare and utilities, but selecting the 10% least volatile stocks according to the sector’s specific characteristics.